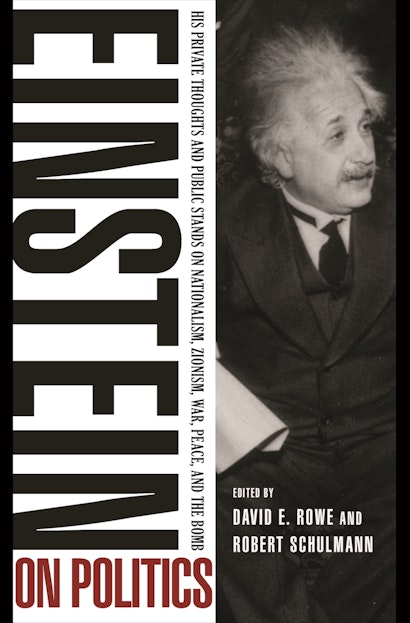 The most famous scientist of the twentieth century, Albert Einstein was also one of the century’s most outspoken political activists. Deeply engaged with the events of his tumultuous times, from the two world wars and the Holocaust, to the atomic bomb and the Cold War, to the effort to establish a Jewish homeland, Einstein was a remarkably prolific political writer, someone who took courageous and often unpopular stands against nationalism, militarism, anti-Semitism, racism, and McCarthyism. In Einstein on Politics, leading Einstein scholars David Rowe and Robert Schulmann gather Einstein’s most important public and private political writings and put them into historical context. The book reveals a little-known Einstein — not the ineffectual and naïve idealist of popular imagination, but a principled, shrewd pragmatist whose stands on political issues reflected the depth of his humanity.

Nothing encapsulates Einstein’s profound involvement in twentieth-century politics like the atomic bomb. Here we read the former militant pacifist’s 1939 letter to President Franklin D. Roosevelt warning that Germany might try to develop an atomic bomb. But the book also documents how Einstein tried to explain this action to Japanese pacifists after the United States used atomic weapons to destroy Hiroshima and Nagasaki, events that spurred Einstein to call for international control of nuclear technology.

A vivid firsthand view of how one of the twentieth century’s greatest minds responded to the greatest political challenges of his day, Einstein on Politics will forever change our picture of Einstein’s public activism and private motivations.

David E. Rowe is professor of the history of mathematics and natural sciences at Johannes Gutenberg University in Mainz, Germany, and a former member of the Einstein Papers Project. Robert Schulmann, a former Boston University history professor, is former head of the Einstein Papers Project. He coedited Albert Einstein, Mileva Marić: The Love Letters and many volumes of the Collected Papers of Albert Einstein (all Princeton).

"A goldmine for readers interested in Einstein as an engaged intellectual of his era. Editors David E. Rowe and Robert Schulmann have done an excellent job of collecting, thematically assembling and historically contextualizing Einstein's private letters and public statements on the great political issues of his time."—Yaron Ezrahi, Nature

"Editors David E. Rowe and Robert Schulmann have done an excellent job of collecting, thematically assembling and historically contextualizing Einstein's private letters and public statements on the great political issues of his time. The book is also a fascinating record of Einstein's private thoughts and public stance on the reception of the relativity revolution. Included here are his reaction to the virulent anti-Semitic, anti-relativity German scientists, his tortured relations with the Prussian Academy of Sciences after the rise of the Nazis and his later expressed identification with Galileo for his struggle 'to overcome the anthropocentric and mythical thinking of his contemporaries and to lead them back to an objective and causal attitude towards the cosmos.'"—C. R. Macauley, Nature

"[G]reat as Einstein's allure remains, the majority of people will probably wish to read just one Einstein book, and this is one they should strongly consider. In addition to being comprehensive, accessible and well written, it is clearly the most up to date, making sensible use of the latest and most authoritative scholarship."—Daniel J. Kennefick, American Scientist online

"Einstein on Politics treats all these issues in detail by combining his most important statements—both public and private—in thematic chapters and by carefully contextualizing each statement. The result is fascinating, illuminating and sometimes moving, resonating both with today's noisy debates about nuclear weapons, international terrorism and civil liberties, and with the ethical dilemmas with which we struggle in the quieter recesses of the mind."—Andrew Robinson, New Scientist

"This brilliant anthology of [Einstein's] journalism and private correspondence brings to life his lucid contributions to the raging debates of the last century over the bomb, his humanitarian objections to war, his belief in a socialist economy and the apparent contradiction between his advocacy of internationalism and his support for Zionism."—David Harounoff, Tribune

"To enhance understanding of Einstein's humanism and activism, Rowe and Schulmann have gathered, organized, and explicated a full spectrum of his reflections, allowing the reader direct access to Einstein's reasoning as he confronts a world of violence rendered exponentially more catastrophic by virtue of his own scientific breakthroughs. Powerful in its personal and political disclosures, this is an essential primary source."—Booklist

"Offers readers a panoramic view of his writings on Zionism and anti-Semitism, nationalism, the fate of Jews during the Holocaust, war, peace, pacifism and nuclear proliferation. Einstein was a vigorous stylist and these selections from his private correspondence attest to his fluency with words."—Sheldon Kirshner, Canadian Jewish News

"Anyone with an interest in Einstein's non-scientific activities in the public realm will profit from reading this book."—Hubert Goenner, Nature Physics

"The most renowned scientist of the last century was famous not only for his seminal contributions to making sense of the universe, from the very large to the very small, but also for his humanism and interest in promoting the possibility of a world without conflict. This book collects many of Einstein's letters and essays that discuss issues pertaining exclusively to his views on the latter. They cover an incredible range of topics from WWI to the UN and much that embroiled the Western world in between. The editors have provided good introductions to each chapter, following Einstein's discursions in chronological order."—N. Sadanand, Choice

"Utilizing a meticulously collected set of both published and unpublished materials, the editors set forth in admirable detail his writings on the issues of the day, which are inextricably connected to his support for the Zionist movement and the creation of Israel. If readers connect Einstein only to the world of science and mathematics, this volume will clearly serve to expand their horizons."—Sanford R. Silverburg, AJL Newsletter

"[T]he documents presented are quite valuable, and the book deserves a wide readership for that alone."—Matthew Stanley, Historical Studies in Natural Sciences

"Einstein was an important man, and Rowe and Schulmann edited an important book about him"—Antoine Capet, H-Net

"This book, ingeniously put together by Rowe and Schulmann, provides a thematic and chronological frame of reference that allows a lucid view of Einstein's political passions, which up to now have been largely unknown even to the interested public. It is a multiply rewarding book, one that all readers are bound to enjoy."—Kosta Tsipis, Journal of Cold War Studies

"Einstein on Politics is an excellent and thought-provoking volume, which can be of interest to scholars as well as to the public at large."—Giorgio Baruchello, European Legacy

"David E. Rowe and Robert Schulmann have compiled exactly the book readers ... may want to consult during or after reading a biography of the 'mere scientist' who held passionate and often outspoken views on the major issues of his time."—Stuart Mitchner, Town Topics

"This book is both fascinating and valuable. By reading Einstein's political writings in their proper historical context, we can see how his politics reflected a deep sense of moral responsibility and a coherent vision of justice and global order. Einstein's humanism shines through on every page."—Walter Isaacson, author of Einstein: His Life and Universe

"For all too long, Albert Einstein's political engagements have been understood, almost parodically, as the naïve pronouncements of a man who floated above human conflicts. But Einstein was anything but naïve. Passionate about social injustice since he was a young man in Europe, Einstein stood hard against militarism, and the accelerating seizure of power by the Nazis. He was a pacifist who knew when pacifism had to be put aside to re-arm against Hitler, a Zionist who never hesitated to speak out for the rights of Arabs, a Democratic Socialist who did not hesitate to blast the authoritarianism of right and left, a proud American who detested McCarthyism. Rowe and Schulmann have gathered crucial documents and set them in context with thoughtful and well-researched scene-setting commentary. Anyone interested in what the most famous person of the twentieth century thought about that century's most important problems ought to study this book with care."—Peter Galison, Harvard University

"This is a superb collection of Einstein's political reflections and statements, with an excellent introduction. No other book is remotely comparable in aim, quality, or currency."—Mary Jo Nye, Oregon State University

"There is nothing else like Einstein on Politics. Rowe and Schulmann's erudition and familiarity with all aspects of Einstein's life make this book an authoritative source on Einstein's political views, many of which are still relevant today."—S. S. Schweber, author of In the Shadow of the Bomb