A groundbreaking exploration of how race in America is being redefined 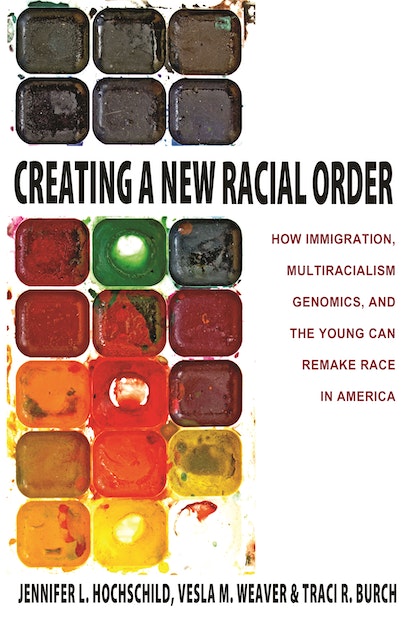 The American racial order—the beliefs, institutions, and practices that organize relationships among the nation’s races and ethnicities—is undergoing its greatest transformation since the 1960s. Creating a New Racial Order takes a groundbreaking look at the reasons behind this dramatic change, and considers how different groups of Americans are being affected. Through revealing narrative and striking research, the authors show that the personal and political choices of Americans will be critical to how, and how much, racial hierarchy is redefined in decades to come.

The authors outline the components that make up a racial order and examine the specific mechanisms influencing group dynamics in the United States: immigration, multiracialism, genomic science, and generational change. Cumulatively, these mechanisms increase heterogeneity within each racial or ethnic group, and decrease the distance separating groups from each other. The authors show that individuals are moving across group boundaries, that genomic science is challenging the whole concept of race, and that economic variation within groups is increasing. Above all, young adults understand and practice race differently from their elders: their formative memories are 9/11, Hurricane Katrina, and Obama’s election—not civil rights marches, riots, or the early stages of immigration. Blockages could stymie or distort these changes, however, so the authors point to essential policy and political choices.

Portraying a vision, not of a postracial America, but of a different racial America, Creating a New Racial Order examines how the structures of race and ethnicity are altering a nation.

"Hochschild, Weaver, and Burch deliver a rich, novel account of the transformation of the new racial order in the U.S. They examine the beliefs, institutions, and history of the practices of race and ethnicity to show that events like September 11, Hurricane Katrina, and the election of Barack Obama reshaped a new generation's concept of race and ethnicity. . . . This well-written book is a refreshingly welcome contribution that lays the foundation for a new generation of scholars and policy makers to study the political and social implications of an increasingly heterogeneous population. The book is essential reading."—Choice

"Creating a New Racial Order is necessary reading that will easily find a place on syllabi for this and the next generation, to whom they dedicate the book, and on whom they are counting to work for a better racial future."—Jennifer Lee, American Journal of Sociology

"One of the most appealing things about the book is its earnest call to action, which is really of the best kind: an appeal that simultaneously stresses the need for improvement while nurturing the optimism that change for the better is within reach. . . . Creating a New Racial Order also deserves high marks for taking up such an important and timely matter, one with the most far-reaching of implications, and doing so in an unusually well-organized and -argued manner."—Ann Morning, Contemporary Sociology

"Creating a New Racial Order does not reveal the outlines of any new racial order or any major new political movements, it helps us understand why a racially transformative politics might become possible, and the problems and prospects it faces. Those understandings are likely to be valuable for years to come."—Rogers M. Smith, Political Science Quarterly

"Future historians may find that Hochschild, Weaver, and Burch got many things wrong, but I doubt they will fault them for lacking bold vision and intellectual courage. This important and timely book belongs not on the shelf but on the desk of every serious scholar of race, regardless of the discipline."—Matt Wray, Journal of American History

"This is a wide-ranging exploration of how America looks, thinks, and lives in terms of race as we go into this new millennium. Bridging political science, sociology, and the burgeoning study of DNA, the authors show us that racial order remains one of the most reliable ways of organizing our past and present as Americans, even as that order is dynamic and indeed transformed over time."—Henry Louis Gates Jr., Harvard University

"It is not often that one reads a book that changes how we think the world works. Creating a New Racial Order is replete with original, and sometimes surprising, insights and evidence on the forces that are generating rising racial heterogeneity in the United States. The authors' compelling analysis of the ongoing transformation of America's racial order is a must-read."—William Julius Wilson, Harvard University

"Showing how historical trends have produced an unprecedented complexity and fluidity in racial meanings, classifications, and identities in the United States, this book argues that the American racial order is changing for the better and explains why this is happening. Bold and provocative, this book is a game changer."—Claire Jean Kim, University of California, Irvine

"With an in-depth analysis of changing definitions of race, this compelling and absorbing book presents evidence that the American racial order is in the middle of a historic transformation. It marshals a spectacular amount of research and sophisticated detail, and will stir considerable debate and discussion. In my reading in this subject area, I haven't encountered a book equal to this one."—Raphael J. Sonenshein, California State University, Fullerton