A spirited defense of the anarchist approach to life 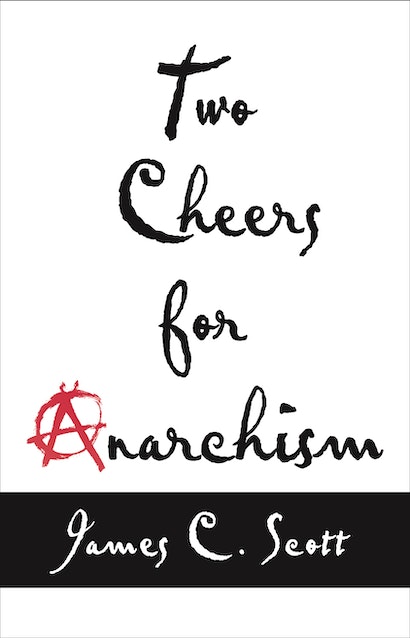 James Scott taught us what’s wrong with seeing like a state. Now, in his most accessible and personal book to date, the acclaimed social scientist makes the case for seeing like an anarchist. Inspired by the core anarchist faith in the possibilities of voluntary cooperation without hierarchy, Two Cheers for Anarchism is an engaging, high-spirited, and often very funny defense of an anarchist way of seeing—one that provides a unique and powerful perspective on everything from everyday social and political interactions to mass protests and revolutions. Through a wide-ranging series of memorable anecdotes and examples, the book describes an anarchist sensibility that celebrates the local knowledge, common sense, and creativity of ordinary people. The result is a kind of handbook on constructive anarchism that challenges us to radically reconsider the value of hierarchy in public and private life, from schools and workplaces to retirement homes and government itself.

Beginning with what Scott calls “the law of anarchist calisthenics,” an argument for law-breaking inspired by an East German pedestrian crossing, each chapter opens with a story that captures an essential anarchist truth. In the course of telling these stories, Scott touches on a wide variety of subjects: public disorder and riots, desertion, poaching, vernacular knowledge, assembly-line production, globalization, the petty bourgeoisie, school testing, playgrounds, and the practice of historical explanation.

Far from a dogmatic manifesto, Two Cheers for Anarchism celebrates the anarchist confidence in the inventiveness and judgment of people who are free to exercise their creative and moral capacities.

James C. Scott is the Sterling Professor of Political Science, professor of anthropology, and codirector of the Agrarian Studies Program at Yale University. His books include Seeing Like a State: How Certain Schemes to Improve the Human Condition Have Failed; Domination and the Arts of Resistance: Hidden Transcripts; and most recently, The Art of Not Being Governed: An Anarchist History of Upland Southeast Asia. He is a fellow of the American Academy of Arts and Sciences and a mediocre part-time farmer and beekeeper.

"In a new book, Two Cheers for Anarchism, James C. Scott, a highly regarded professor of anthropology and political science at Yale, commends anarchism precisely for its 'tolerance for confusion and improvisation.'. . . Two Cheers for Anarchism conducts a brief and digressive seminar in political philosophy, starting from the perspective of the disillusioned leftist."—Kelefa Sanneh, New Yorker

"With the 'A' on its covered circled in red, Two Cheers might at first appear to be preaching to the converted, but in fact it's an attempt to explain and advocate for an anarchist perspective to a readership not already disposed to smash the state. . . . Touching all the familiar progressive touchstones along the way, Scott makes the case for everyday insubordination and disregard for the rules in pursuit of freedom and justice."—Malcolm Harris, Los Angeles Review of Books

"Alternately insightful, inciteful, and insulting, Scott makes an idiosyncratically intellectual case that technocratic elites aren't to be trusted, and insubordination is a virtue to be cherished. . . . Two Cheers for Anarchism deserves more than two cheers in review because Scott usefully expands the vocabularies that leaders and managers need to have around the critical issues of power, control, and resistance. Every effective leader I know loses sleep over how best to empower their talent and constructively align their people. And all the successful leaders I know—especially the entrepreneurs—have at least a little streak of anarchism—of creative destruction—inside of them. For this reason alone, they will find Scott's insights and incites worth their time."—Michael Schrage, Fortune

"Scott selects wonderful anecdotes to illustrate his tribute to the anarchist way of seeing the world, his prose is always on the verge of breaking into a smile. Political theory rarely offers so much wry laughter."—Chris Walters, Acres USA

"[E]ngaging. . . . Scott's eye for spontaneous order in action demonstrates that anarchy is all around us: that it's no abstract philosophy but an essential part of all our lives."—Reason

"James C. Scott . . . has a new book just out: Two Cheers for Anarchism. I've just started reading it, but bits of it are so good that I just can't hold off blogging about them."—Bleeding Heart Libertarians

"Yale professor James C. Scott and Princeton University Press have recently published Two Cheers for Anarchism, an easy to read book that will help illuminate the concept of anarchism for anyone under misconceptions about the sophisticated ideology of anarchy. Rather than attempt to convince readers to join their local anarchist party, Scott's goal in writing Two Cheers for Anarchism is to make 'a case for a sort of anarchist squint' by relating anecdotes that demonstrate the fundamental ideas of anarchism."—Coffin Factory

"In Two Cheers for Anarchism James C. Scott . . . [makes the case] for a kinder, gentler form of rebellion than the sort of bomb-throwing, street-fighting revolution typically associated with anarchism."—Nick Gillespie, Wilson Quarterly

"The aspects of Scott's work that I have been able to examine . . . demonstrate that the typical left-right axis by which political positions are classified is seriously inadequate to the task of handling a thinker like Scott. His case against big government is going to appeal to libertarians. His demonstrations of the wisdom often contained in traditions and customs will be attractive to conservatives. And his concerns with lessening inequalities of wealth and power will be congenial to progressives. So where does he fit on the left-right axis? Nowhere, I'd say: he is his own man. And, setting aside its many other virtues, that alone makes this a book worth reading."—Gene Callahan, American Conservative

"In Two Cheers for Anarchism, James C. Scott, a professor of political science at Yale, takes a fresh and often bracing look at the philosophy espoused by (the Russian philosopher Mikhail) Bakunin and asks whether it may afford some clues as to how to proceed in the 21st century."—Richard King, Australian

"Written in a highly engaging series of what he calls 'fragments,' Scott's work links together a series of brief reflections on social cooperation in the absences of (or despite opposition from) hierarchy, tying such cooperation to a sense of autonomy, freedom, and human flourishing. . . . There is much of value in this short book and, hopefully, much that is inspirational."—Choice

"The book taken as a whole is a great leap forward and will form the basis of current and future engagements in political philosophy. In my own view, the book answers Noam Chomsky call for 'intellectual responsibility'; the responsibility to speak the truth and insist upon it."—Tawanda Sydesky Nyawasha, Symbolic Interaction

"Though Scott's kaleidoscope of touching stories, challenging thoughts and well-chosen examples is at all times diverting and often mind-blowing, this panoply of loose ideas remains connected to a strong underlying argument. He is radical but hardly polemical, utopian but deeply rooted to the ground."—Pascale Siegrist, Cambridge Humanities Review

"[A]ll readers, even those sympathetic to Scott's anarchist theme, will find themselves unsettlingly but usefully challenged by this beautifully written and argued book, especially by his call to pay more attention to the beliefs and actions of ordinary people and to avoid overly abstract theorizing that serves to aid centralized hierarchies and technocratic elites."—John A. Rapp, Review of Politics

"Two Cheers for Anarchism is an insightful contemplation of the everydayness of anarchism. . . . I can still recommend the book insofar is it casts some much needed light on the everydayness of anarchism, which is particularly important owing to the weight of Scott's name and the of clarity of his pen. Few authors are better positioned than Scott to render anarchist ideas more luminous and less threatening in the wider social sciences."—Simon Springer, Antipode

"Two Cheers for Anarchism is an unusual, affecting, and useful book. . . . The insights contained in this small volume are useful in addressing contemporary concerns about the post-political landscape as well as connecting with recent calls for autonomous geographies including alternative practices in organizing households, economies, and engagements with ecologies."—Stephen Healy, Antipode

"James Scott is one of the great political thinkers of our time. No one else has the same ability to pursue a simple, surprising idea, kindly but relentlessly, until the entire world looks different. In this book, he also demonstrates a skill shared by the greatest radical thinkers: to reveal positions we've been taught to think of as extremism to be emanations of simple human decency and common sense."—David Graeber, author of Debt: The First 5,000 Years

"Building on the insights of his masterful Seeing Like a State, James Scott has written a powerful and important argument for social organization that resists the twin poles of Big Corporations and Big Governments. In an age increasingly shaped by decentralized, bottom-up networks, Two Cheers for Anarchism gives timely new life to a rich tradition of political thought."—Steven Johnson, author of Where Good Ideas Come From: The Natural History of Innovation and Future Perfect: The Case for Progress in a Networked Age

"I am a big fan of James Scott. In this highly readable and thought-provoking book, he reveals the meaning of his 'anarchist' sensibility through a series of wonderful personal stories, staking out an important position and defending it in a variety of contexts, from urban planning to school evaluation. I don't know of anyone else who has defined this viewpoint so successfully."—Francis Fukuyama, author of The Origins of Political Order

"The ambition of this book is compelling and contagious. Combining the populist rhetoric of Thomas Paine with the ferocious satire of Jonathan Swift, James Scott makes a wonderfully simple and potent argument in favor of mutualism, creativity, local knowledge, and freedom. I predict that this will become one of the most influential books in political theory and public debate for the twenty-first century."—Georgi Derluguian, author of Bourdieu's Secret Admirer in the Caucasus