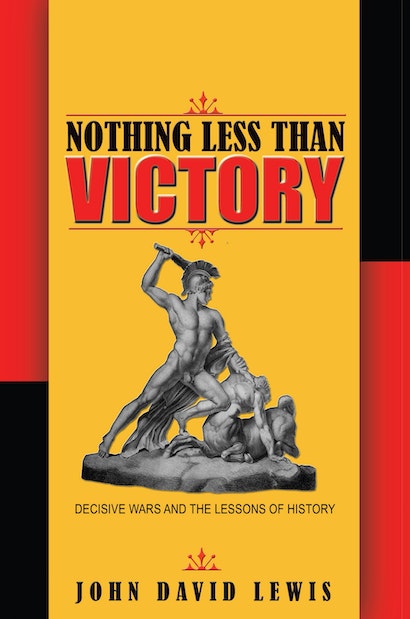 The goal of war is to defeat the enemy’s will to fight. But how this can be accomplished is a thorny issue. Nothing Less than Victory provocatively shows that aggressive, strategic military offenses can win wars and establish lasting peace, while defensive maneuvers have often led to prolonged carnage, indecision, and stalemate. Taking an ambitious and sweeping look at six major wars, from antiquity to World War II, John David Lewis shows how victorious military commanders have achieved long-term peace by identifying the core of the enemy’s ideological, political, and social support for a war, fiercely striking at this objective, and demanding that the enemy acknowledges its defeat.

Lewis examines the Greco-Persian and Theban wars, the Second Punic War, Aurelian’s wars to reunify Rome, the American Civil War, and the Second World War. He considers successful examples of overwhelming force, such as the Greek mutilation of Xerxes’ army and navy, the Theban-led invasion of the Spartan homeland, and Hannibal’s attack against Italy—as well as failed tactics of defense, including Fabius’s policy of delay, McClellan’s retreat from Richmond, and Chamberlain’s appeasement of Hitler. Lewis shows that a war’s endurance rests in each side’s reasoning, moral purpose, and commitment to fight, and why an effectively aimed, well-planned, and quickly executed offense can end a conflict and create the conditions needed for long-term peace.

Recognizing the human motivations behind military conflicts, Nothing Less than Victory makes a powerful case for offensive actions in pursuit of peace.

John David Lewis is visiting associate professor of philosophy, politics, and economics at Duke University, and senior research scholar in history and classics at the Social Philosophy and Policy Center at Bowling Green State University. He is the author of Solon the Thinker: Political Thought in Archaic Athens and Early Greek Lawgivers.

"Lewis' analysis of war as a psychological struggle and 'clash of moral purposes' is lucid and forceful; it's especially telling in his incisive account of Sherman's march through Georgia, and especially provocative in his defense of the atomic bombings of Japan."—Publishers Weekly

"John David Lewis offers a superb appraisal of how ancient and modern wars start and finish. This chronicle of some 2,500 years of Western history is replete with a philosophical analysis of why nations fight, win—and lose. His insights and conclusions are original and fearless—as well as timely and welcome in the confused war-making of the present age."—Victor Davis Hanson, author of Carnage and Culture

"This book's argument is powerful and provocative, and Lewis is a good storyteller and scholar. Ambitious, stimulating, and thoughtful, this book makes a strong case for the value of the strategic offensive, and engages with the kind of problems that everyone should be thinking about today."—Barry Strauss, author of The Spartacus War