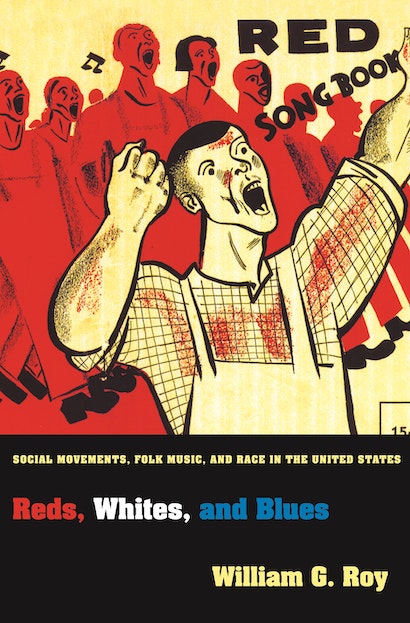 Music, and folk music in particular, is often embraced as a form of political expression, a vehicle for bridging or reinforcing social boundaries, and a valuable tool for movements reconfiguring the social landscape. Reds, Whites, and Blues examines the political force of folk music, not through the meaning of its lyrics, but through the concrete social activities that make up movements. Drawing from rich archival material, William Roy shows that the People’s Songs movement of the 1930s and 40s, and the Civil Rights Movement of the 1950s and 60s implemented folk music’s social relationships — specifically between those who sang and those who listened — in different ways, achieving different outcomes.


Roy explores how the People’s Songsters envisioned uniting people in song, but made little headway beyond leftist activists. In contrast, the Civil Rights Movement successfully integrated music into collective action, and used music on the picket lines, at sit-ins, on freedom rides, and in jails. Roy considers how the movement’s Freedom Songs never gained commercial success, yet contributed to the wider achievements of the Civil Rights struggle. Roy also traces the history of folk music, revealing the complex debates surrounding who or what qualified as “folk” and how the music’s status as racially inclusive was not always a given.

William G. Roy is professor and chair of the sociology department at the University of California, Los Angeles. He is the author of Socializing Capital (Princeton) and Making Societies.

"Although some of Roy's theoretical discussions in the early chapters should interest folk music scholars, his book will be more important to students of social movements."—Robert V. Wells, Journal of American History

"The importance of this excellent book is that it revisits these two movements and reveals once again the power of culture."—Ron Eyerman, American Journal of Sociology

"With these carefully documented and well-argued case studies, Roy makes a considerable contribution to cultural sociology in general and social movement studies in particular, and those with a background in the latter field will gain the most from the work as a whole."—Dana Sawchuk, Political Studies Review

"Social movement scholars have slowly begun to explore the rich topic of culture and contention. With this wonderful book, Roy breaks important new ground by looking beyond the culture of a given movement to explore the social relations by which movements do culture and with what effects. The argument he puts forward, from examining the Old Left and Civil Rights Movement, is both convincing and important."—Doug McAdam, Stanford University

"This exceptional book provides one of the most grounded sociological accounts of music and its role in social movements to date. Integrating insights from the sociology of culture, music, and organizations with in-depth historical analyses of American folk traditions, Reds, Whites and Blues is both theoretically astute and innovative. It is a must-read, with implications for many specialties in our field."—Vincent Roscigno, Ohio State University

"In this revealing and incisive book, Roy shows how folk music inhabited two transformative moments of American social history in very different ways. Turning from how movements emerge to what they do, he demonstrates how music both reflects and reshapes the relations between movement leaders and militants. Some movements, his book shows, use music as a weapon of propaganda; others as a means of creating solidarity. Students of movements and American history will never again be able to sideline music as a mere ornament of social movement studies."—Sidney Tarrow, Cornell University