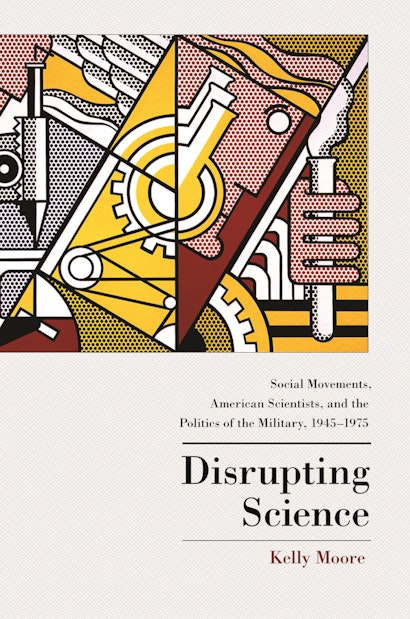 In the decades following World War II, American scientists were celebrated for their contributions to social and technological progress. They were also widely criticized for their increasingly close ties to military and governmental power — not only by outside activists but from among the ranks of scientists themselves. Disrupting Science tells the story of how scientists formed new protest organizations that democratized science and made its pursuit more transparent. The book explores how scientists weakened their own authority even as they invented new forms of political action.


Drawing extensively from archival sources and in-depth interviews, Kelly Moore examines the features of American science that made it an attractive target for protesters in the early cold war and Vietnam eras, including scientists’ work in military research and activities perceived as environmentally harmful. She describes the intellectual traditions that protesters drew from — liberalism, moral individualism, and the New Left — and traces the rise and influence of scientist-led protest organizations such as Science for the People and the Union of Concerned Scientists. Moore shows how scientist protest activities disrupted basic assumptions about science and the ways scientific knowledge should be produced, and recast scientists’ relationships to political and military institutions.

Disrupting Science reveals how the scientific community cumulatively worked to unbind its own scientific authority and change how science and scientists are perceived. In doing so, the book redefines our understanding of social movements and the power of insider-led protest.

Kelly Moore is assistant professor of sociology at the University of Cincinnati.

"In Disrupting Science, Kelly Moore attempts to explain how scientists' attitudes about the proper role of science and scientists in public life changed so dramatically within two generations....Moore's well-researched account introduces the pacifists, petition writers, newsletter publishers, and protestors—who doggedly drew attention to the ways that militarism was infiltrating the practice of science in the United States."—Audra J. Wolfe, Science

"Disrupting Science is an important scholarly addition to the literature in the sociology of science and history of science. The book's examination of archival sources shows a complex relationship between scientists and the military from 1945 to 1975."—G.D. Oberle, Choice

"The book prompts intriguing questions about the professional role, the boundaries by which it is constituted, and the potential consequences of overstepping those boundaries."—Joseph C. Hermanowicz, American Journal of Sociology

"As the U.S. government's budget for national and homeland security approaches three-quarters of a trillion dollars in fiscal year 2009, and the roles of science and technology continue to expand in our daily lives, our collective need for nuanced studies of the relations between the military and science is ever more pressing. Moore's thoughtful study points the way."—William J. Astore, H-Net Reviews

"Disrupting Science is first rate work. . . . Moore's account serves as an exemplary case study in what she and Scott Frickel have billed in their 2006 book as 'the new political sociology of science.' I expect her new book to be read widely across the discipline."—Steven Epstein, Mobilization

"Moore's book is very well-written, scholarly, and impeccably organized, making it a useful reference tool. It is relevant to those interested in political sociology, the 'fact-value' debate in the philosophy of science, questions of science and ideology, and science studies."—Ronjon Paul Datta, Canadian Journal of Sociology

"Useful for academics studying the history of science and social movements, this book offers an interesting, unique, and insightful look at the role of scientists in challenging the boundaries of their own expertise and positions of influence. From scientists as elite experts to science 'for the people,' this work offers a captivating glimpse as social movement activists among scientists during this time in history."—Chelsea Schelly, Social Science Journal

"Kelly Moore's book is a significant scholarly achievement and will be an important and much-cited work in the sociology and social studies of science. Moore not only advances how we conceive of the politics that scientists engage in, but she also more clearly spells out the protest activities of the 1960s and places science near the center of their concerns."—David H. Guston, author of Between Politics and Science: Assuring the Integrity and Productivity of Research

"This is a truly excellent book by a thoughtful scholar. Moore's theoretical development is compelling and her concepts are of use beyond the empirical terrain she covers in the book. What's more, she shows that it is worth looking at social movements that focus on institutions like science and studying these movements' effects on meanings and orientation, not just policies."—Daniel Lee Kleinman, editor of Science, Technology, and Democracy