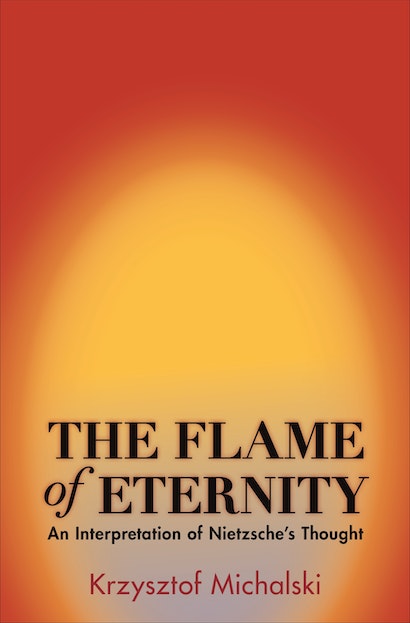 The Flame of Eternity provides a reexamination and new interpretation of Nietzsche’s philosophy and the central role that the concepts of eternity and time, as he understood them, played in it. According to Krzysztof Michalski, Nietzsche’s reflections on human life are inextricably linked to time, which in turn cannot be conceived of without eternity. Eternity is a measure of time, but also, Michalski argues, something Nietzsche viewed first and foremost as a physiological concept having to do with the body. The body ages and decays, involving us in a confrontation with our eventual death. It is in relation to this brute fact that we come to understand eternity and the finitude of time. Nietzsche argues that humanity has long regarded the impermanence of our life as an illness in need of curing. It is this “pathology” that Nietzsche called nihilism. Arguing that this insight lies at the core of Nietzsche’s philosophy as a whole, Michalski seeks to explain and reinterpret Nietzsche’s thought in light of it. Michalski maintains that many of Nietzsche’s main ideas — including his views on love, morality (beyond good and evil), the will to power, overcoming, the suprahuman (or the overman, as it is infamously referred to), the Death of God, and the myth of the eternal return — take on new meaning and significance when viewed through the prism of eternity.

Krzysztof Michalski is professor of philosophy at Boston University and Warsaw University, as well as rector of the Institute for Human Sciences in Vienna. He is the author of Logic and Time: An Essay on Husserl's Theory of Meaning.

"There was a deep continuity between the vision set out in The Flame of Eternity and the life [Krzysztof Michalski] lived. . . . His thought informed his life; and his life, as a thinker, a lover, a friend, is integrated in moving ways into his final work."—Tamsin Shaw, New York Review of Books

"[V]aluable. . . . The author rightly grasps Nietzsche's uniqueness and originality, anticipating the crisis of European thought about to unfold with the onset of the 20th century."—Choice

"[T]his is a marvelous book, absorbing, inspired and full of insights. It will be of interest to Nietzsche scholars, and to all those—not necessarily academics—with an interest in modern European thought, in religious studies, and in the connections between these disciplines."—Viola Brisolin, European Legacy

"This remarkable book is an attempt to understand that most enigmatic of philosophers, Friedrich Nietzsche. It reads for us the central notions of Nietzsche's work, culminating in the Eternal Return of the Same. The special illuminating power of Michalski's interpretation comes not just from his reading Nietzsche in the context of the philosophical tradition, but even more in his placing it in constant comparison to Nietzsche's foil and reference point, the Christ of the Bible. Most strikingly of all, Michalski helps us to grasp Nietzsche by exploring with insight and feeling the dimensions of human experience which this philosopher strove to lay open for us."—Charles Taylor, author of The Secular Age

"There are many books on Nietzsche. Some of them are distinguished by their learning and analytical power, some by their beauty. Very rarely can we find a book that combines both: learning and beauty. We see this unusual virtue in Michalski's book."—Leszek Kołakowski, author of Main Currents of Marxism

"This is an excellent and original interpretation of Nietzsche's philosophy as a whole, as well as a remarkable piece of scholarship and argumentative skill. Michalski has managed to achieve the happy balance that all of us professional philosophers strive for: he has succeeded in writing a philosophical book that has a lot to say to scholars and Nietzsche experts as well as to the general educated public. This is a rare feat indeed."—Piotr Hoffman, University of Nevada, Reno