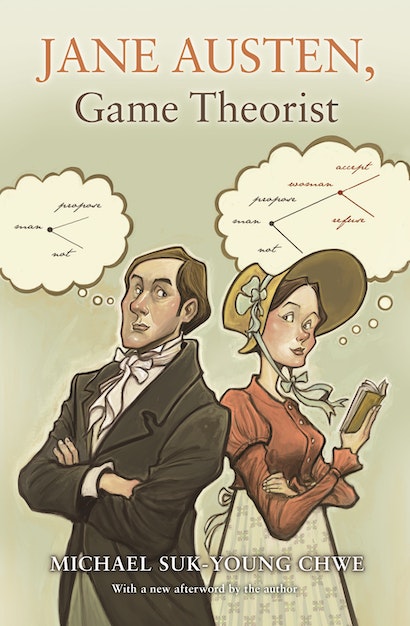 Game theory—the study of how people make choices while interacting with others—is one of the most popular technical approaches in social science today. But as Michael Chwe reveals in his insightful new book, Jane Austen explored game theory’s core ideas in her six novels roughly two hundred years ago—over a century before its mathematical development during the Cold War. Jane Austen, Game Theorist shows how this beloved writer theorized choice and preferences, prized strategic thinking, and analyzed why superiors are often strategically clueless about inferiors. Exploring a diverse range of literature and folktales, this book illustrates the wide relevance of game theory and how, fundamentally, we are all strategic thinkers.

Michael Suk-Young Chwe is professor of political science at the University of California, Los Angeles, and the author of Rational Ritual: Culture, Coordination, and Common Knowledge (Princeton).

"Jane Austen, Game Theorist . . . is more than the larky scholarly equivalent of 'Pride and Prejudice and Zombies.'. . . Mr. Chwe argues that Austen isn't merely fodder for game-theoretical analysis, but an unacknowledged founder of the discipline itself: a kind of Empire-waisted version of the mathematician and cold war thinker John von Neumann, ruthlessly breaking down the stratagems of 18th-century social warfare."—Jennifer Schuessler, New York Times

"[A] convincing case for how mathematical models and fictional narratives can work towards reciprocal illustration."—Jonathan Sachs, Times Literary Supplement

"This is insightful literary analysis at its most accessible and enjoyable."—Kate Hutchings, Huffington Post Books

"Jane Austen, Game Theorist should join the list of strategic classics like The Art of War . . . on the shelf of everybody who wants to be effective in life."—Diane Coyle, Enlightenment Economics

"Chwe makes an argument for Austen as a founder of decision science in this 2013 book that boasts an impressive array of diagrams and hard-nosed textual analysis."—Evelyn Crowley, Vogue.com

"This is such a fabulous book—carefully written, thoughtful and insightful."—Guardian.co.uk's Grrl Scientist blog

"Well researched and with an excellent index, the book will appeal to Austen fans who can see her characters in another light."—Choice

"When an intelligent, knowledgeable reader with a new distinctive viewpoint engages intensely with a great work of literature, the results are usually worthy of attention. There is much that is valuable in Chwe's book."—Ernest Davis, SIAM News

"Chwe's volume is a valuable first step toward a more interdisciplinary and much more inclusive field of decision sciences."—Mary Flanagan, American Journal of Play

"Chwe's book is already a success among academics with a taste for rational choice theory and among Austen fans. It is highly recommended for students of game theory who would like to place the theory within different contexts, as well as students of political economy who would like to understand the extent to which a unique context influences individual objectives in strategic thinking."—Aurelie Charles, Eastern Economic Journal

"The book is in more of a social science vein than a technical one. The general reader should have no trouble following the author's arguments."—Mary Long, Mathematical Reviews Clippings

"Jane Austen's novels provide wonderful examples of strategic thinking in the lives of ordinary people. In Jane Austen, Game Theorist, Michael Chwe brilliantly brings out these strategies, and Austen's intuitive game-theoretic analysis of these situations and actions. This book will transform the way you read literature."—Avinash Dixit, coauthor of The Art of Strategy: A Game Theorist's Guide to Success in Business and Life

"Jane Austen, game theorist?! You will cry, how absurd! But you will be wrong. Michael Chwe's beautifully written and argued book makes the case, crushingly, that Our Jane was fascinated by human prudent interaction—what the game theorists call strategy. Based on deep familiarity with the novels and their scholarly literature, his book will instruct and delight both literary critics and economists. Combining the humanities and social sciences for mutual illumination, Chwe practices a 'humanomics' masterfully."—Deirdre N. McCloskey, University of Illinois, Chicago

"Whether you're an intelligent strategic thinker or a clueless bureaucrat, this book will teach and delight you. The merger of game theory and Jane Austen, with extended examples from African American folklore and U.S. foreign policy, provides the best study I know of motive and cluelessness. Michael Chwe, a rare breed of political scientist, has raised the game of two disciplines. This is a genuinely interdisciplinary work that avoids the reductionism of much game theory and the provincialism of many Austen admirers."—Regenia Gagnier, author of The Insatiability of Human Wants: Economics and Aesthetics in Market Society

"It would be useful for everyone to understand a little bit more about strategic thinking. Jane Austen seems not only to get this, but to explore it obsessively. Looking at Austen and other works, this persuasive book shows that the game theory in historical sources is not inherently opposed to humanistic thinking, but embedded within it."—Laura J. Rosenthal, University of Maryland

"Polished, organized, and well-documented, this book demonstrates the existence of well-defined game theory in historical texts. Jane Austen, in particular, develops a clear model of strategic thinking in her novels. Michael Chwe shows the efficacy and pitfalls of such thinking in her characters' actions, and in their perceptions and understanding of the actions of others. An enjoyable read."—Susan Skeath, coauthor of Games of Strategy