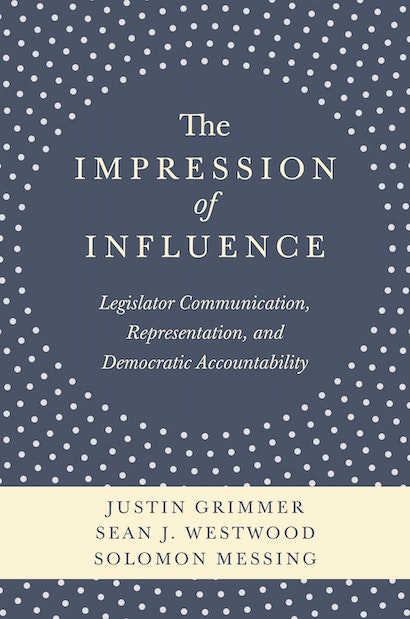 Constituents often fail to hold their representatives accountable for federal spending decisions—even though those very choices have a pervasive influence on American life. Why does this happen? Breaking new ground in the study of representation, The Impression of Influence demonstrates how legislators skillfully inform constituents with strategic communication and how this facilitates or undermines accountability. Using a massive collection of Congressional texts and innovative experiments and methods, the book shows how legislators create an impression of influence through credit claiming messages.

The Impression of Influence raises critical questions about how citizens hold their political representatives accountable and when deception is allowable in a democracy.

Justin Grimmer is associate professor of political science at Stanford University. He is the author of Representational Style. Sean J. Westwood is a postdoctoral researcher at the Center for the Study of Democratic Politics at Princeton University. Solomon Messing is a research scientist with Facebook's Data Science Team.

"This book is sophisticated in its approaches, theoretically rigorous, and well written. . . . The result is a deeply engaging and highly informative work."—Wendy J. Schiller, Congress & The Presidency

"A noteworthy essay that grapples with the broad question of democratic accountability. . . . There is much to like about The Impression of Influence."—Scot Schraufnagel, Political Science Quarterly

"An update, impressive, and in-depth look at how lawmakers are able to claim credit for, and benefit from, federal spending decisions. I expect that this book will be read by students of Congress for many years."—James M. Curry, Perspectives on Politics

"This important book provides novel insights into the strategic interactions among legislators, citizens, and the bureaucracy that shape federal spending. Grimmer, Westwood, and Messing deploy new observational and experimental analyses to understand which legislators are most likely to seek government spending in their districts, how they advertise this information, and what effect it has on their electoral fortunes."—Gregory A. Huber, Yale University

"Drawing from a cognitive model of voter attention and learning, The Impression of Influence generates a system of credit claiming that far surpasses prior models. Providing a compelling view of what drives voter attention and congressional credit claiming, this book will interest political psychologists and congressional scholars for generations to come."—Mathew D. McCubbins, Duke University

"This book, which could not have been written just a few years ago, is a must-read for students of American politics and all who want to know where social science is headed. The authors use the latest text as data methods and modern online platforms to conduct experiments, including on the world's largest social network. While their techniques are cutting edge, the substantive questions they illuminate are as old as our republic."—Jasjeet S. Sekhon, University of California, Berkeley

"The Impression of Influence throws new light on the credit claiming behavior of members of the U.S. House. The topical book makes a strong case for the idea that politicians need to generate the impression that they are cooking up benefits for those back home. This is the most convincing and interesting work about the credit claiming front that has appeared in a long time."—David Mayhew, Yale University

"Politicians are often claiming credit for spending, even when their role in securing spending is limited or absent. This book shows that voters largely fail to discount those claims, are mostly insensitive to spending, and primarily respond to politicians' mere announcements for spending. The Impression of Influence makes a major contribution to research on voters' limitations in holding politicians accountable."—Gabriel Lenz, University of California, Berkeley