"We cannot discount the risk, in light of the lessons of our own history, that at some point in the future, high-level government officials will decide that this massive database of extraordinarily sensitive private information is there for the plucking. Americans must never make the mistake of wholly 'trusting' our public officials."—The NSA Report 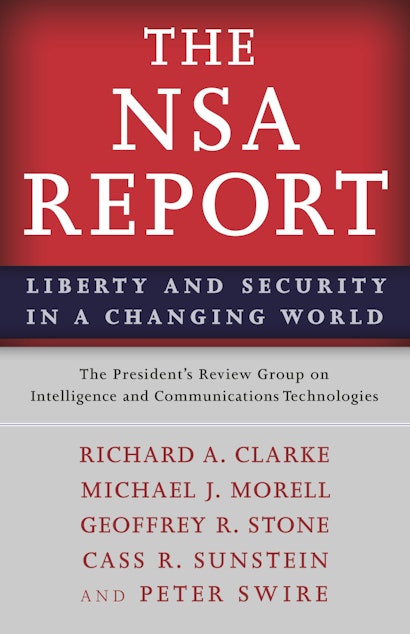 This is the official report that is helping shape the international debate about the unprecedented surveillance activities of the National Security Agency. Commissioned by President Obama following disclosures by former NSA contractor Edward J. Snowden, and written by a preeminent group of intelligence and legal experts, the report examines the extent of NSA programs and calls for dozens of urgent and practical reforms. The result is a blueprint showing how the government can reaffirm its commitment to privacy and civil liberties—without compromising national security.

Richard A. Clarke served as a national security official under presidents Bill Clinton and George W. Bush. Michael J. Morell is a former deputy director of the Central Intelligence Agency. Geoffrey R. Stone is the Edward H. Levi Distinguished Service Professor of Law at the University of Chicago Law School. Cass R. Sunstein is the Robert Walmsley University Professor at Harvard University. Peter Swire is the Nancy J. and Lawrence P. Huang Professor in the Scheller College of Business at the Georgia Institute of Technology.

"A remarkably thorough and well-reasoned report calling on the government to end its bulk phone-data collection program and to increase both the transparency and accountability of surveillance programs."—New York Times

"[The] recommendations take aim at some of the most controversial practices of the intelligence community."—Washington Post

"Within the 300-page report are 46 recommendations that would dramatically curtail the National Security Agency's surveillance powers. While the proposals are specific and varied, they all echo one theme: The government's reach can no longer be limited by technological capacity alone. It must be reined in with laws and institutional reform."—Atlantic

"The report is a brilliantly readable guide to the world [Edward] Snowden revealed; its clarity of analysis, proceeding from fundamental principles, impeccable. . . . Governments around the world would do well to reflect on the principles that underpin The NSA Report and relate them to their own intelligence-gathering activities."—Kieron O'Hara and Nigel Shadbolt, Science

"Fascinating insight . . . into how the nation's data-mining apparatus works—and how it's supposed to work."—Kirkus Reviews

"The NSA Report tackles some of the most important civil liberties issues of our era. Whether or not you agree with all of its recommendations, it is simply an outstanding introduction to the subject."—Jack M. Balkin, Yale Law School

"The Snowden revelations have prompted many people to wonder about what is going on, and what could be done to stop the surveillance infrastructure without crippling the nation's ability to interdict acts of terror. This report, written by world-class experts, provides a valuable explanation and assessment of the situation—and how best to address it. It could turn into the seminal report on the issue—an issue central to liberal democracy."—Viktor Mayer-Schönberger, University of Oxford

"This is an extraordinarily important report, reflecting a synthesis of viewpoints from luminaries in the fields of law, privacy, and national security. The report's recommendations are serious and extensive and will continue to influence the U.S. and other governments as they grapple with the problems and opportunities raised by all-pervasive surveillance."—Frank Pasquale, University of Maryland