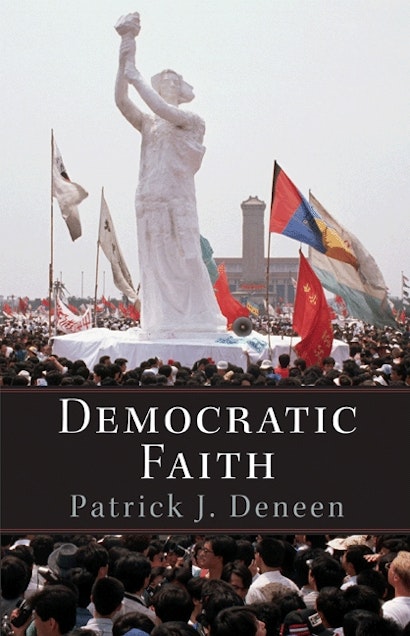 The American political reformer Herbert Croly wrote, “For better or worse, democracy cannot be disentangled from an aspiration toward human perfectibility.” Democratic Faith is at once a trenchant analysis and a powerful critique of this underlying assumption that informs democratic theory. Patrick Deneen argues that among democracy’s most ardent supporters there is an oft-expressed belief in the need to “transform” human beings in order to reconcile the sometimes disappointing reality of human self-interest with the democratic ideal of selfless commitment. This “transformative impulse” is frequently couched in religious language, such as the need for political “redemption.” This is all the more striking given the frequent accompanying condemnation of traditional religious belief that informs the “democratic faith.?


At the same time, because so often this democratic ideal fails to materialize, democratic faith is often subject to a particularly intense form of disappointment. A mutually reinforcing cycle of faith and disillusionment is frequently exhibited by those who profess a democratic faith — in effect imperiling democratic commitments due to the cynicism of its most fervent erstwhile supporters.


Deneen argues that democracy is ill-served by such faith. Instead, he proposes a form of “democratic realism” that recognizes democracy not as a regime with aspirations to perfection, but that justifies democracy as the regime most appropriate for imperfect humans. If democratic faith aspires to transformation, democratic realism insists on the central importance of humility, hope, and charity.

Patrick Deneen is Associate Professor of Government and the inaugural Markos and Eleni Tsakopoulos-Kounalakis Chair of Hellenic Studies at Georgetown University. He has also taught at Princeton University. He is the author of The Odyssey of Political Theory and a number of articles on ancient and American political thought.

"This book offers a serious philosophical and historical basis for current democratic theory. It makes a valuable contribution to the topic of religion and politics and is worthy of careful study. It is well written and immensely readable."—Studia Historiae Ecclesiasticae

"Following in the footsteps of Christopher Lasch, [Patrick Deneen] is concerned to expose what he perceives as the ill-placed object of the democratic faithful — a trust in human capacities for self-government and progress so perfectionist that it entails the transformation of humans into the divine creatures they can never be.… Unlike so much Christian commentary on democracy, Deneen pursues his critique not as prolegomena for the advocacy of an alternative faith but as a way of proposing a 'chastened' democratic faith, one that might count him among the faithful."—J. Ronald Engel, Journal of Religion

"Whether they be 'deliberative liberals,' whose confidence in rationality, science, and technique inspires their democratic quest, or 'agonistic democrats,' those animated by a foundational belief in the citizenship-forming capacity of conflict, these true believers insist on the possibility of profound social transformation with a hope that leans far more on faith than on empirical evidence. Deneen's probing of the origins of this faith is brilliant—an exacting, at times exciting venture into pivotal texts.... What we all need, Deneen implies, is not the absence of faith but a better faith, one that clarifies vision, forges better ties, forces a different reading of our past, and takes us down, down, into the depths of who we, as Americans, as Westerners, and as human beings are."—Eric Miller, Books & Culture

"This is a powerful and poignant work in that it refines and deepens contemporary democratic theory. It literally resurrects the perennial wisdom of Reinhold Niebuhr and Christopher Lasch for serious democrats in a fascinating dialogue with Plato, Tocqueville, and Rousseau. Its relevance for our time resounds loudly."—Cornel West, Princeton University, author of Democracy Matters

"Democratic Faith is truly a tour de force, a tremendously important, even magisterial contribution to democratic theory. With this book, Patrick Deneen establishes himself as the worthy exponent and even spiritual heir to the line of American political thinkers that ranges from Tocqueville to Whitman to Dewey to contemporaries Richard Rorty and Benjamin Barber. It is an amazing piece of scholarship, both rigorous and capacious, offering careful yet novel re-readings of the above authors as well as, to mention a few of the highlights, Plato, Aeschylus, Aristotle, Rousseau, and other luminaries. Deneen succeeds in bringing these disparate authors into a compelling narrative that assembles the various pieces into a synthetic perspective without any undue compromise along the way. Moreover, the book is gorgeously written and wonderfully readable—the beautiful prose and the scintillating argument flow."—John Seery, Pomona College. author of Political Theory for Mortals

"This book is an important contribution to studies of democratic theory, to studies of such authors as Dewey, Arendt, and Rorty, and to the burgeoning literature on the topic of religion and politics. After the first chapter my reaction came to be: get this book out fast!"—Robert Faulkner, Boston College, author of The Jurisprudence of John Marshall