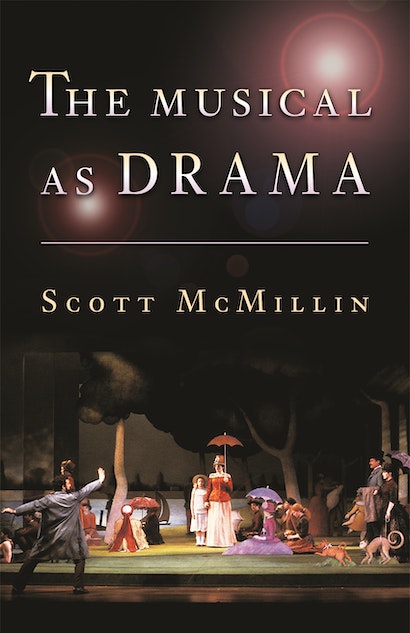 Derived from the colorful traditions of vaudeville, burlesque, revue, and operetta, the musical has blossomed into America’s most popular form of theater. Scott McMillin has developed a fresh aesthetic theory of this underrated art form, exploring the musical as a type of drama deserving the kind of critical and theoretical regard given to Chekhov or opera. Until recently, the musical has been considered either an “integrated” form of theater or an inferior sibling of opera. McMillin demonstrates that neither of these views is accurate, and that the musical holds true to the disjunctive and irreverent forms of popular entertainment from which it arose a century ago.


Critics and composers have long held the musical to the standards applied to opera, asserting that each piece should work together to create a seamless drama. But McMillin argues that the musical is a different form of theater, requiring the suspension of the plot for song. The musical’s success lies not in the smoothness of unity, but in the crackle of difference. While disparate, the dancing, music, dialogue, and songs combine to explore different aspects of the action and the characters.


Discussing composers and writers such as Rodgers and Hammerstein, Stephen Sondheim, Kander and Ebb, Leonard Bernstein, and Jerome Kern, The Musical as Drama describes the continuity of this distinctively American dramatic genre, from the shows of the 1920s and 1930s to the musicals of today.

Scott McMillin (1934-2006) was Professor of English at Cornell University. He was the coauthor of The Queen's Men and Their Plays and the author of The Elizabethan Theatre and the Book of Sir Thomas More.

"Rarely does a book come along that seems to elegantly summarize what has come before while taking its subject to the next level. The Musical as Drama is just such a book. ...This volume encapsulates an entire career's reflection on the nature and structure of musical theater....This well-written, lucid, and effective book should serve as a fine addition to the expanding scholarship on America's musical theater."—Elizabeth A. Wells, Notes

"Staunchly defending a much-maligned genre, McMillin sets his sights high. . . . Even if one disagrees with some of his tastes and arguments, his defense of the musicals of the last half-century is convincing and, appropriately, an entertaining one."—Heather Heckman, Screening the Past

"McMillin's specific examples are at once astute and persuasive and somehow obvious (and I mean this as the highest compliment). Anyone who reads this book (and all with even a passing interest in musical theatre should) will constantly be struck with a 'Why didn't I think of that?' feeling."—Stacy Wolf, Text & Presentation

"This is a lovely book, and it blows in like a breath of fresh air. After the theory, the apologetics, the cultural guilt, the special interests—here comes a book that tells you it's OK to like musicals, whoever you are."—Stephen Banfield, University of Bristol, author of Jerome Kern and Sondheim's Broadway Musicals