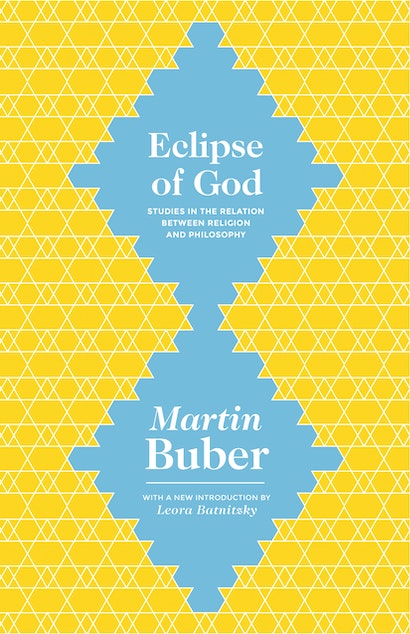 Biblical in origin, the expression “eclipse of God” refers to the Jewish concept of hester panim, the act of God concealing his face as a way of punishing his disobedient subjects. Though this idea is deeply troubling for many people, in this book Martin Buber uses the expression hopefully—for a hiding God is also a God who can be found.

First published in 1952, Eclipse of God is a collection of nine essays concerning the relationship between religion and philosophy. The book features Buber’s critique of the thematically interconnected—yet diverse—perspectives of Soren Kierkegaard, Hermann Cohen, C.G. Jung, Martin Heidegger, and other prominent modern thinkers. Buber deconstructs their philosophical conceptions of God and explains why religion needs philosophy to interpret what is authentic in spiritual encounters. He elucidates the religious implications of the I-Thou, or dialogical relationship, and explains how the exclusive focus on scientific knowledge in the modern world blocks the possibility of a personal relationship with God.

Featuring a new introduction by Leora Batnitzky, Eclipse of God offers a glimpse into the mind of one of the modern world’s greatest Jewish thinkers.

Martin Buber (1878–1965) is known for many influential works in the fields of philosophy of religion and biblical interpretation. His ideas and intellect were globally esteemed, propelled interfaith alliances, and inspired luminaries such as Paul Tillich and Martin Luther King Jr. His books included I and Thou and The Legend of Baal-Shem (Princeton). Leora Batnitzky is the Ronald O. Perelman Professor of Jewish Studies and Professor of Religion at Princeton University. She is the author of How Judaism Became a Religion: An Introduction to Modern Jewish Thought (Princeton).

"[Buber] remains a philosopher for our times. As he writes in the prelude to this volume, 'Real listening has become rare.' In an age in which technology and the vitriol of partisan politics dominate in the United States and the world at large, Buber's words could not be more prophetic."—Leora Batnitzky, Princeton University