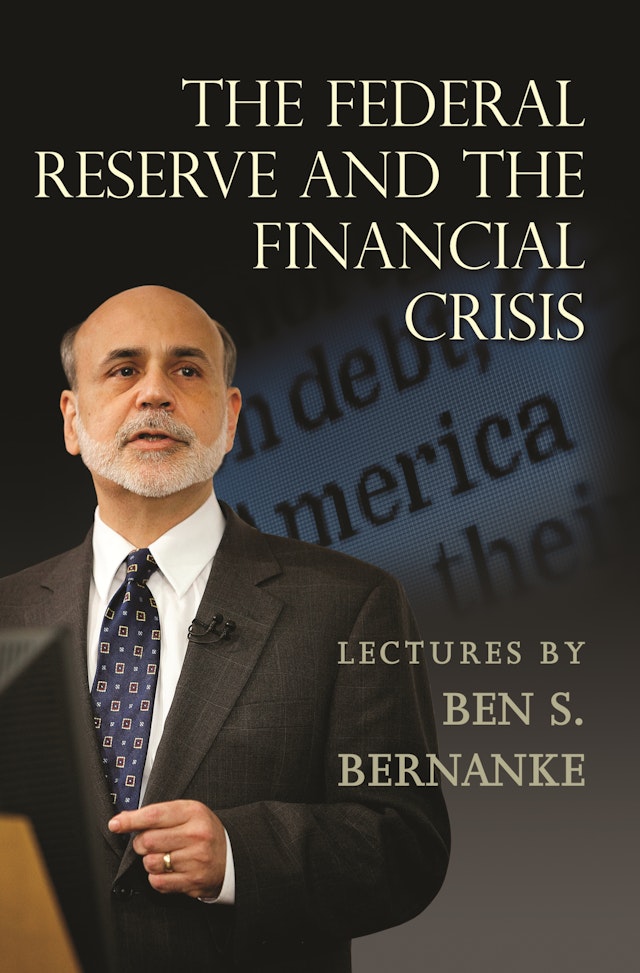 In 2012, Ben Bernanke, chairman of the U.S. Federal Reserve, gave a series of lectures about the Federal Reserve and the 2008 financial crisis, as part of a course at George Washington University on the role of the Federal Reserve in the economy. In this unusual event, Bernanke revealed important background and insights into the central bank’s crucial actions during the worst financial crisis since the Great Depression. Taken directly from these historic talks, The Federal Reserve and the Financial Crisis offers insight into the guiding principles behind the Fed’s activities and the lessons to be learned from its handling of recent economic challenges.

Bernanke traces the origins of the Federal Reserve, from its inception in 1914 through the Second World War, and he looks at the Fed post-1945, when it began operating independently from other governmental departments such as the Treasury. During this time the Fed grappled with episodes of high inflation, finally tamed by then-chairman Paul Volcker. Bernanke also explores the period under his predecessor, Alan Greenspan, known as the Great Moderation. Bernanke then delves into the Fed’s reaction to the recent financial crisis, focusing on the central bank’s role as the lender of last resort and discussing efforts that injected liquidity into the banking system. Bernanke points out that monetary policies alone cannot revive the economy, and he describes ongoing structural and regulatory problems that need to be addressed.

Providing first-hand knowledge of how problems in the financial system were handled, The Federal Reserve and the Financial Crisis will long be studied by those interested in this critical moment in history.

Ben S. Bernanke served as chairman of the U.S. Federal Reserve from 2006 to 2014. He has also served as chairman of the President's Council of Economic Advisors and as a member of the Board of Governors of the Federal Reserve. Before his time in public service he was a professor of economics at Princeton University. His many books include Essays on the Great Depression and Inflation Targeting (both Princeton).

"Anyone interested in a primer on recent financial history will likely find Bernanke's book to be worthwhile reading."—Publishers Weekly

"The lectures are consistently lucid and informal . . . and above all intelligent and interesting. . . . [I]t would be difficult to find a better short and not very technical account of what went wrong, and of how the Fed (and the Treasury) managed to keep it from getting much worse."—Robert Solow, New Republic

"Readers who are not fans of the Fed chairman and his Keynesian, fiat-money policies should find as much of interest here as those who are; it's the sort of primary-source book that investors will scrutinize, politicians will seize on, pundits will plunder and generations of scholars will analyse. . . . [The Federal Reserve and the Financial Crisis] brings what Bernanke said in the classroom to a vastly larger audience; now, it's up to the readers of varying political and economic persuasions to make what they will of his behind-the-scenes account."—Alan Wallace, Pittsburgh Tribune-Review

"This book is, in short, not just an excellent guide to the Fed and its response to the financial crisis, but also constitutes an important document of its time, a reflection that central banks can do some very effective short-term anti-crisis measures, but they cannot be miracle workers."—Harold James, Central Banking Journal

"The lectures, and Bernanke's answers to students' questions, are uniformly erudite, elegant and concise. Perhaps, the most arresting aspect of the lectures is the fascinating insight they provide into the thinking and motivation of the world's most powerful central banker."—Selwyn Cornish, Economic Record

"The author examines what the Federal Reserve was intended to accomplish, how it performed its statutory task as it evolved over time and the special functions of the lender-of-last-resort that have been called upon during the financial crisis. These lectures provide a useful primer on matters not often presented in such a comprehensive or unequivocal way. Bernanke's reputation is often identified with his expertise on the Great Depression. Here, he presents himself differently, as a practitioner of central banking. . . . A great introduction to the functioning of central banking for general readers."—Kirkus Reviews

"This important book deserves to be read widely both because Bernanke admirably explains the Fed and its actions and because his authorship provides a window into his thinking as one of the world's most powerful financial figures."—Library Journal

"In March 2012, Ben Bernanke, chairman of the US Federal Reserve, gave four guest lectures at George Washington University. This slim volume—at only 130 pages, comfortably finished in the time it takes to watch a TV movie—comprises those lectures apparently almost verbatim, with a few astute audience questions and answers at the end of each. . . . This is easy reading."—Financial World

"The Federal Reserve and the Financial Crisis . . . provides a useful tutorial on the workings of an institution in its most difficult hour. For that reason alone, it makes an important contribution to the historical record."—Marc L. Ross, Financial Analysts Journal

"[T]his is a useful and highly approachable take on the history of central banking and the recent financial crisis. It's worth a read, if only to get a first-person narrative from one of the most important figures in global capital markets."—Carrie Sheffield, Washington Times

"[F]or those interested in why we have central banks, what led to the 2008 financial crisis and how the nation's top officials reacted, there isn't a better primer. . . . This is no boring textbook, despite the occasional chart. Bernanke presents a clear and engaging narrative of the economic history of the United States, while also tackling a few of the perennial anti-Fed bugaboos. . . . One of the book's most important achievements is to place the Fed's extraordinary interventions during the crisis—including the emergency lending of $1.2 trillion to the financial industry—in context."—Ben Weyl, Roll Call

"That loud crack you hear are the necks snapping as money-managers and financial specialists all over the country do double takes before snatching this book off the shelves."—C.D. Quyn, San Francisco Book Review

"[The Federal Reserve and the Financial Crisis] is a helpful primer on modern central banking by one of its preeminent practitioners."—Foreign Affairs

"This book will be particularly useful for those teaching a class in either macroeconomics or economic history of the twentieth century at the undergraduate level, as these lectures provide a succinct and accessible account of U.S. macro policymaking over the last hundred years."—Kris James Mitchener, EH.Net

"Providing first-hand knowledge of how problems in the financial system were handled, The Federal Reserve and the Financial Crisis will long be studied by those interested in this critical moment in history."—World Book Industry

"I learned so much about the Fed, the crisis, the financial market. Say what you want about Bernanke, but he is one great teacher."—Tibi Puiu, ZME Science

"[T]his is an extremely useful book, especially to monetary neophytes like myself. I learned so much about the Fed, the crisis, the financial market. Say what you want about Bernanke, but he is one great teacher."—Tibi Puiu, ZME Science

"Providing first-hand knowledge of how problems in the financial system were handled, The Federal Reserve and the Financial Crisis will long be studied by those interested in this critical moment in history."—PolitCommerce

"In this well-organized book, Ben Bernanke tells the story of the Fed from its founding to the recent financial crisis. Bernanke's rendering is coherent and compelling."—Barry Eichengreen, author of Exorbitant Privilege: The Rise and Fall of the Dollar and the Future of the International Monetary System

"It is rare indeed to find a Fed chairman looking back and explaining the Fed's actions. In this valuable book, Ben Bernanke argues strongly that the Fed's decisions during the financial crisis were consistent with long-standing central banking practices. His account is an important part of the historical record."—Alan Blinder, Princeton University