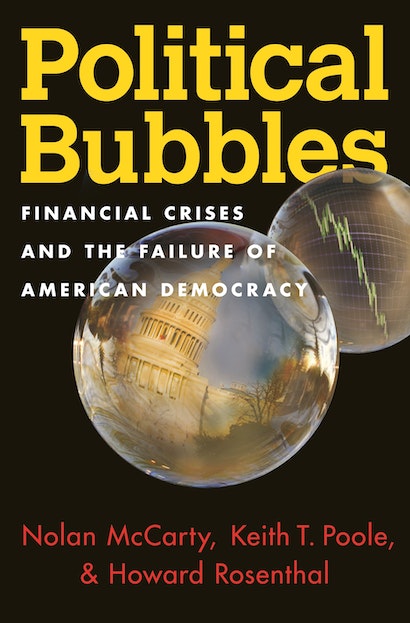 Behind every financial crisis lurks a “political bubble”—policy biases that foster market behaviors leading to financial instability. Rather than tilting against risky behavior, political bubbles—arising from a potent combination of beliefs, institutions, and interests—aid, abet, and amplify risk. Demonstrating how political bubbles helped create the real estate-generated financial bubble and the 2008 financial crisis, this book argues that similar government oversights in the aftermath of the crisis undermined Washington’s response to the “popped” financial bubble, and shows how such patterns have occurred repeatedly throughout US history.

The authors show that just as financial bubbles are an unfortunate mix of mistaken beliefs, market imperfections, and greed, political bubbles are the product of rigid ideologies, unresponsive and ineffective government institutions, and special interests. Financial market innovations—including adjustable-rate mortgages, mortgage-backed securities, and credit default swaps—become subject to legislated leniency and regulatory failure, increasing hazardous practices. The authors shed important light on the politics that blinds regulators to the economic weaknesses that create the conditions for economic bubbles and recommend simple, focused rules that should help avoid such crises in the future.

The first full accounting of how politics produces financial ruptures, Political Bubbles offers timely lessons that all sectors would do well to heed.

"As pundits debate the causes of the 2008 economic crisis, the authors contend that financial crises have inherently political dimensions. McCarty, Poole, and Rosenthal argue persuasively that political bubbles and market bubbles are highly similar, with policy biases contributing to and amplifying market behavior. . . . The authors provide an exhaustive review of structural problems that they believe impede effective government response to new catastrophic economic developments. Their arguments transcend the academic to include historical precedents and specifics on Wall Street machinations."—Publishers Weekly

"McCarty, Poole, and Rosenthal have crafted a masterful analysis of the 2008 financial crisis. Their central thesis is that the underlying cause of the Great Recession was the 'political bubble'. . . . The warnings for the U.S. political system are dire, and the authors make the case for political courage in dealing with wealth inequalities. This book would be an excellent addition to the library of any student of political economy and an excellent start in generating policy proposals on how to deal with future crises."—Choice

"Greatly expanding upon and enriching prior work on political polarization, Political Bubbles persuasively shows that the 2008 financial crisis was the product of potent political forces."—Philip Rocco, Public Administration

"If you thought that the financial crisis was just about finance and the alphabet soup of financial products, think again. With style and eloquence, McCarty, Poole, and Rosenthal show it's all about politics—the Faustian bargains that our politicians have made, their ideological biases, and more. This is essential reading for understanding how we got into the current mess and how we are likely to get into many more unless we rethink our politics."—Daron Acemoglu, Massachusetts Institute of Technology and coauthor of Why Nations Fail

"McCarty, Poole, and Rosenthal are the most incisive analysts of America's political economy. In Political Bubbles, their penetrating gaze offers the clearest definitive political economic explanation for the recent financial crisis."—James Robinson, Harvard University and coauthor of Why Nations Fail

"This wise book offers an incisive evaluation of the politics of economic crisis. Persuasively insisting on the need for a new public philosophy, its elegant account at the juncture of political economy and policy analysis artfully connects conceptual argumentation about ideology, interests, and institutions to inventive and illuminating analyses of data."—Ira Katznelson, Columbia University

"This innovative and compelling book demonstrates how financial bubbles and political bubbles go hand in hand, producing periodic meltdowns that deeply affect the lives of ordinary citizens. Synthesizing political science with economics and finance, the book explains not only how the most recent financial crisis relates to previous episodes in American history, but also why responses to the crisis have fallen short of what many had hoped for in terms of fundamental reforms."—Gregory Wawro, Columbia University