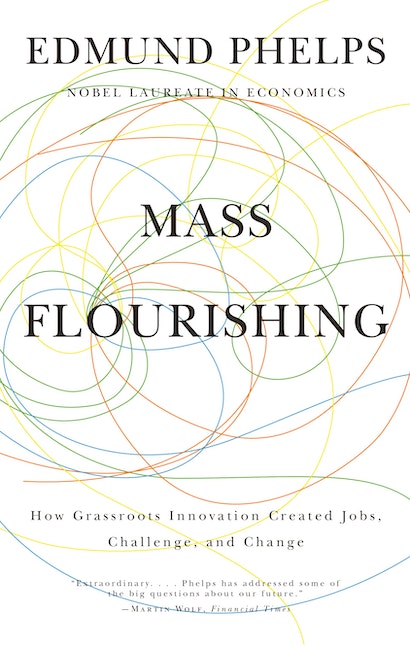 In this book, Nobel Prize-winning economist Edmund Phelps draws on a lifetime of thinking to make a sweeping new argument about what makes nations prosper — and why the sources of that prosperity are under threat today. Why did prosperity explode in some nations between the 1820s and 1960s, creating not just unprecedented material wealth but “flourishing” — meaningful work, self-expression, and personal growth for more people than ever before? Phelps makes the case that the wellspring of this flourishing was modern values such as the desire to create, explore, and meet challenges. These values fueled the grassroots dynamism that was necessary for widespread, indigenous innovation. Most innovation wasn’t driven by a few isolated visionaries like Henry Ford and Steve Jobs; rather, it was driven by millions of people empowered to think of, develop, and market innumerable new products and processes, and improvements to existing ones. Mass flourishing — a combination of material well-being and the “good life” in a broader sense — was created by this mass innovation.


Yet indigenous innovation and flourishing weakened decades ago. In America, evidence indicates that innovation and job satisfaction have decreased since the late 1960s, while postwar Europe has never recaptured its former dynamism. The reason, Phelps argues, is that the modern values underlying the modern economy are under threat by a resurgence of traditional, corporatist values that put the community and state over the individual. The ultimate fate of modern values is now the most pressing question for the West: will Western nations recommit themselves to modernity, grassroots dynamism, indigenous innovation, and widespread personal fulfillment, or will we go on with a narrowed innovation that limits flourishing to a few?


A book of immense practical and intellectual importance, Mass Flourishing is essential reading for anyone who cares about the sources of prosperity and the future of the West.

Edmund Phelps was the 2006 Nobel Laureate in economics. He is director of the Center on Capitalism and Society at Columbia University. His many books include Designing Inclusion,
Rewarding Work, and Seven Schools of Macroeconomic Thought. 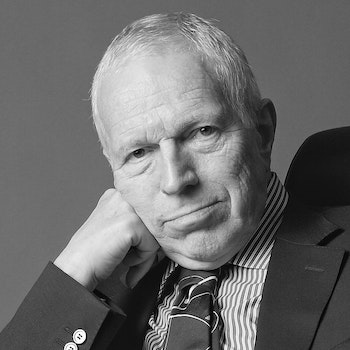 "The book eloquently discusses the culture of innovation, which can refer to both an entrepreneurial mind-set and the cultural achievements during an age of change. . . . The dismal science becomes a little brighter when Mr. Phelps draws the connections between the economic ferment of the industrial age and the art of Beethoven, Verdi and Rodin."—Edward Glaeser, Wall Street Journal

"Phelps, a Nobel laureate in economics, defies categorisation. In this extraordinary book—part history, part economics and part philosophy—he proclaims individual enterprise as the defining characteristic of modernity. But he fears this dynamism is lost. One does not have to agree to recognise that Phelps has addressed some of the big questions about our future."—Martin Wolf, Financial Times

"Phelps has written a book that transcends the materialist walls of standard economics. . . . It is a book J.M. Keynes would have admired."—Paul DeRosa, American Interest

"A great book that will annoy big business and absolutely infuriate the left. I loved it."—Diana Hunter, Financial World

"Nobel laureate Edmund Phelps' latest book should be read by those seeking a broader context to the challenges currently facing the global economies. In his wide-ranging and insightful book, Professor Phelps draws on historical trends and cultural shifts to present his hypothesis that a lack of dynamism in modern economies lies at the root of the current malaise. . . . Indeed, this remarkable book addresses the central economic question of why some economies thrive while others languish."—Declan Jordan, London School of Economics Review of Books

"Few leading economists . . . have tried to develop Marx's contention that there is an ineluctable relationship between human psychology and market participation. This relationship is what Phelps describes as human 'flourishing.'"—Andrew Godley, International Journal of the Economics of Business

"Phelps has produced an insightful work that bridges gaps among economics, sociology, and philosophy to identify countries that have the capabilities to prosper and flourish. This book is an essential read for individuals interested in better assessing countries' economies and competitive advantages."—Library Journal

"The author ranges extremely widely and any student of any age will gain something from it, irrespective of political views."—Samuel Brittan, Financial Times

"Phelps's book deserves credit for showing that the strength of an economy doesn't depend on small differences in the tax rate, or the tactics of a country's central bank. Phelps rightly points out that economic dynamism depends on much deeper issues like a culture's affinity for risk taking and respect for individual achievement. And he wields convincing statistics that suggest actors in our political economy, from our government, to corporations, to workers, have to some extent lost their reverence for these values."—Chris Matthews, Time.com Money & Business

"I . . . find his values-driven view of national prosperity fascinating—and applicable to corporate and personal prosperity. If innovation and the prosperity it yields stem from the values to which we subscribe as individuals, organizations, and nations, it stands to reason that we should be paying a great deal of attention to the particular values we adopt and espouse."—Theodore Kinni, Strategy-Business.com

"[W]ide-ranging. . . . Mass Flourishing: How Grassroots Innovation Created Jobs, Challenge and Change, a distillation of years of research and thought about the changes in values and attitudes that once unleashed wide-scale creativity and risk-taking and which are under severe threat today."—Brian Milner, Globe & Mail

"Phelps has given us a clear warning of the dangers of corporatism. I hope that more people hear and heed the warning."—Arnold Kling, Econlog

"[I]t wasn't until today that I started looking at Mass Flourishing by Edmund Phelps, about the central role of innovation in modern growth and, more, in the enabling of the good life. Obviously I should have read it last week. It looks right on theme, and it is pleasing to pick up an economics book that has a chapter on Aristotle."—Enlightened Economist

"One does not have to agree to recognise that Phelps has addressed some of the big questions about our future."—Financial Times

"Mass Flourishing offers a brilliant dissection of the origins, causes, and eventual decline of modern capitalism—an inclusive economy characterized by the complex unfettered interactions among diverse indigenous innovators, entrepreneurs, financiers, and consumers. . . . This book should be accessible to general readers and is especially stimulating for graduate students and those interested in economics, sociology, history, political science, and psychology."—Choice

"It applies many important aspects of Virginia political economy, making a contribution to understanding not only the positive, but also the normative implications of the rules of the game."—Rosolino Candela, Public Choice

"It challenges many of our prized assumptions about what makes economies succeed."—David P Goldman, Standpoint

"This is a recommended read, not only because it was written by Edmund Phelps, the 2006 Nobel Laureate in economics, but for encouraging reflection on fundamental issues related to modern life and the contemporary interpretation of Aristotle's 'the good life'. The author is such an experienced and iconic guide that it makes the journey through the subjects covered in the book an excellent read for anyone."—Jacek Klich, Central Banking Journal

"It is a marvelous book that deserves to be read by everyone, but particularly those entrusted with the design of the European future."—Bjorn Wahlroos, Bloomberg Businessweek

"Anyone who finds today's economic debates too small-minded for the immense challenges we face should be drawn to this important work. Only Edmund Phelps would place ultimate blame for the Great Recession on the loss of the right concept of the good life. Phelps has been ahead of his time as an economic thinker for a half century. This may be his deepest, boldest, and most important work."—Lawrence H. Summers, Harvard University

"Few scholars have had the capacity to place the concept of the 'good life' in the context of both philosophical and economic thought. That is what Edmund Phelps has done in his masterly analysis of what he terms a 'modern economy,' once exemplified by Americans' capacity to innovate, to challenge, to dream—and to grow. But he warns that this model needs to be refreshed and changed to restore its potential."—Paul Volcker, former chairman of the Federal Reserve

"In this magisterial sweep of historical storytelling, Edmund Phelps draws upon his rich and deep cultural hinterland—from Robin Hood to Karl Marx to Friedrich Hayek—to explore why some countries develop dynamic economies driven by incessant innovation and inspiration while others still lag far behind. Economic history has rarely been more penetratingly understood and engagingly told."—Nicholas Wapshott, author of Keynes Hayek: The Clash That Defined Modern Economics

"This extraordinary, paradigm-shifting book provides fascinating and fresh insights into the relationship between economic systems, innovation, and creativity. Drawing from a dazzling array of historical and contemporary evidence, Edmund Phelps shows that misguided economic ideas have fractured societies and stifled well-being, and he provides a framework for going beyond the current predicament to create a better world. This book should be read by the widest possible audience."—Ian Goldin, director of the Oxford Martin School, University of Oxford

"In this powerful book, Edmund Phelps disrupts lines of debate between right and left. He shows how human initiative and creativity hold the key to future economic prosperity and social progress, and argues that what is holding us back are not the demands of the needy, but rather the stranglehold of conservative attitudes and entrenched privileges, which have steadily narrowed the field for individual innovation and accomplishment."—Philip K. Howard, author of The Death of Common Sense

"This book is what Adam Smith's Wealth of Nations should have been about, if it were to have been an even more important book. Mass Flourishing contains much history, but it focuses more on what society should do today, and it provides a call to action."—Robert J. Shiller, author of Finance and the Good Society

"This book is very good indeed, drawing on a lifetime of thought and experience and a wide knowledge outside economics as well as, of course, in it. Phelps's argument about the relationship between personal flourishing, the dynamism of a society, and the innovative capacity of that society is well argued and clearly enunciated."—John Kay, author of Obliquity: Why Our Goals Are Best Achieved Indirectly