A revealing examination of small-town life 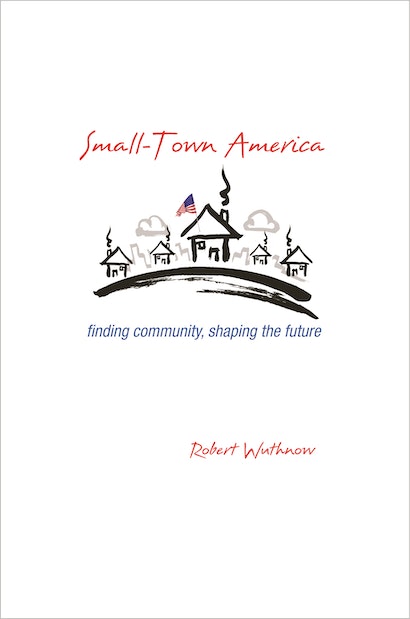 More than thirty million Americans live in small, out-of-the-way places. Many of them could have joined the vast majority of Americans who live in cities and suburbs. They could live closer to more lucrative careers and convenient shopping, a wider range of educational opportunities, and more robust health care. But they have opted to live differently.

In Small-Town America, we meet factory workers, shop owners, retirees, teachers, clergy, and mayors—residents who show neighborliness in small ways, but who also worry about everything from school closings and their children’s futures to the ups and downs of the local economy. Drawing on more than seven hundred in-depth interviews in hundreds of towns across America and three decades of census data, Robert Wuthnow shows the fragility of community in small towns. He covers a host of topics, including the symbols and rituals of small-town life, the roles of formal and informal leaders, the social role of religious congregations, the perception of moral and economic decline, and the myriad ways residents in small towns make sense of their own lives. Wuthnow also tackles difficult issues such as class and race, abortion, homosexuality, and substance abuse.

Small-Town America paints a rich panorama of individuals who reside in small communities, finding that, for many people, living in a small town is an important part of self-identity.

Robert Wuthnow is the Gerhard R. Andlinger '52 Professor of Social Sciences at Princeton University. His books include Rough Country: How Texas Became America's Most Powerful Bible-Belt State, Red State Religion: Faith and Politics in America's Heartland and Remaking the Heartland: Middle America since the 1950s (all Princeton).

"This comprehensive investigation of social life in small, rural U.S. communities by distinguished scholar Wuthnow is a remarkable contribution to the rural sociological literature. The author combines data from the U.S. census, national surveys, and his own quantitative and qualitative research to illuminate how rural residents view the changes in small town life over the past few decades. . . . An important, thought-provoking picture of small town life."—Choice

"[A] rich tapestry depicting the pleasures and difficulties of life in small-town America, the histories and the promises of these places, and the hopes and fears of the people who choose to live there."—Elizabeth Dilley, Christian Century

"In Small-Town America there is a wealth of information for the field researcher, the demographer, the survey designer, and the community theorist. We are confident that Wuthnow's work will lead to more insightful explorations in community theory and how rural America continues to play a significant role in American society."—Matthew L. McKnight and Ralph B. Brown, American Journal of Sociology

"This engaging book offers a reassessment of small-town life, avoiding nostalgic simplifications and placing the small town into proper perspective relative to the rest of American society. Wuthnow navigates through misperceptions held by many people—including some social scientists—and offers a more balanced view of small-town life and culture. I know of no other book like it."—Wade Clark Roof, University of California, Santa Barbara

"Small-Town America fills a significant gap in the sociological literature. Grounded in a nationally representative survey, ethnographic site visits, and scores of in-depth interviews, Wuthnow's nuanced and sensitive book draws on the voices of small-town Americans and challenges enduring stereotypes. Wuthnow takes the conversation deeper, and he does not avoid the hot-button issues."—John Schmalzbauer, Missouri State University