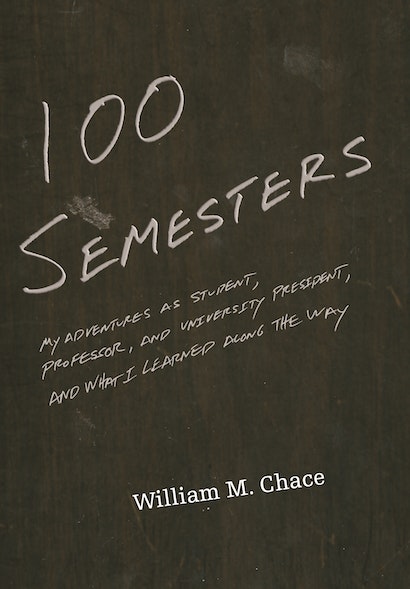 In One Hundred Semesters, William Chace mixes incisive analysis with memoir to create an illuminating picture of the evolution of American higher education over the past half century. Chace follows his own journey from undergraduate education at Haverford College to teaching at Stillman, a traditionally African-American college in Alabama, in the 1960s, to his days as a professor at Stanford and his appointment as president of two very different institutions — Wesleyan University and Emory University.


Chace takes us with him through his decades in education — his expulsion from college, his boredom and confusion as a graduate student during the Free Speech movement at Berkeley, and his involvement in three contentious cases at Stanford: on tenure, curriculum, and academic freedom. When readers follow Chace on his trip to jail after he joins Stillman students in a civil rights protest, it is clear that the ideas he presents are born of experience, not preached from an ivory tower.


The book brings the reader into both the classroom and the administrative office, portraying the unique importance of the former and the peculiar rituals, rewards, and difficulties of the latter.


Although Chace sees much to lament about American higher education — spiraling costs, increased consumerism, overly aggressive institutional self-promotion and marketing, the corruption of intercollegiate sports, and the melancholy state of the humanities — he finds more to praise. He points in particular to its strength and vitality, suggesting that this can be sustained if higher education remains true to its purpose: providing a humane and necessary education, inside the classroom and out, for America’s future generations.

William M. Chace is Professor of English and President Emeritus at Emory University. He is the author of two books, The Political Identities of Ezra Pound and T. S. Eliot and Lionel Trilling: Criticism and Politics.

"Chace here recounts a young man's maturation and offers insight into the challenges of university administration. . . . Chace is a gifted storyteller, appealingly honest in analyzing what he did well and where he went wrong."—Evelyn Beck, Library Journal

"An unusual book, 100 Semesters is part memoir, part analysis and part how-to manual. . . . Chace's prose is clear and compelling, a pleasure to read as much for its style as for its ideas. It is, in a word, eloquent."—Mark E. Hayes, Atlanta Journal-Constitution

"A thoughtful commentary on both the promises and challenges colleges and universities have and continue to face. . . . [T]his is a much-needed, authentic commentary on the changes which happened throughout American higher education from one who was a direct participant in academia. . . . Highly recommended."—Choice

"A very useful, if not crucial addition, to the libraries of aspiring humanists and administrators in U.S. higher education. Although neither a call to arms nor a road-map for change, Chace's book is a rich, timely, and sober reflection on higher education's upper half at the start of the twenty-first century."—Tim Lacy, History and Education

"I have read Bill Chace's book and found it moving and full of what Nietzsche called 'joyful wisdom.' He is the Ishmael of American higher education's great quest for excellence: he has seen it all, its glories and shames, its triumphs and defeats, its ironies, tragedies, and paradoxes—and he has survived to tell us the tale. He is the best commentator on college and university life since Clark Kerr. And he weaves the threads of his own life and his own struggles into the great tapestry of institutions. His story takes us beyond the roles he has played—student, professor, dean, president—into the life he has lived in these institutions. It has been a good life but not an easy one. And out of it he has drawn thoughtful lessons for all of us who care about America's best colleges and universities. A wise and well-crafted memoir."—Tom Gerety, New York University

"In his engaging and delightfully honest account of the changes he experienced in American higher education over the last half century, Bill Chace mixes memoir and affectionate criticism as he reflects on his own continuing education in a variety of roles: student, teacher, administrator, on six very different campuses. While deploring the destructive role that intercollegiate athletics has come to play, the competitive commercialization of what was once thought of as the life of the mind, and the cost of attending college today, Chace's respect for and love of teaching, and all that is best in the academy, shines through the pages of this thoughtful book. Those of us who have spent our lives on a campus will see our own experience mirrored in Chace's odyssey, and for those who have not, it will be clearer why higher education in this country is admired around the world. We should all hope that 'loving critics' like Chace will continue to answer the calling."—Mary Patterson McPherson, President Emeritus of Bryn Mawr College and Vice President of the Andrew W. Mellon Foundation

"Chace's book is not a standard memoir but an autobiography of his experiences inside higher education. He had the good fortune to be at important schools at important times, and he had the intelligence and wit to observe carefully what was occurring at those institutions and in higher education generally. In a crowded field, this is a new kind of book: a mixed genre that deftly combines memoir and educational critique."—Murray Sperber, author of Beer and Circus: How Big-Time College Sports Is Crippling Undergraduate Education

"If one were to design the experience for someone to write a memoir surveying, critically and thoughtfully, the landscape of post-World War II higher education in America, Bill Chace's career or one very like it would emerge. I don't think there is a book about higher education in America that is as thorough, as personal, and as rich."—Donald Kennedy, former president of Stanford University, Editor-in-Chief of Science