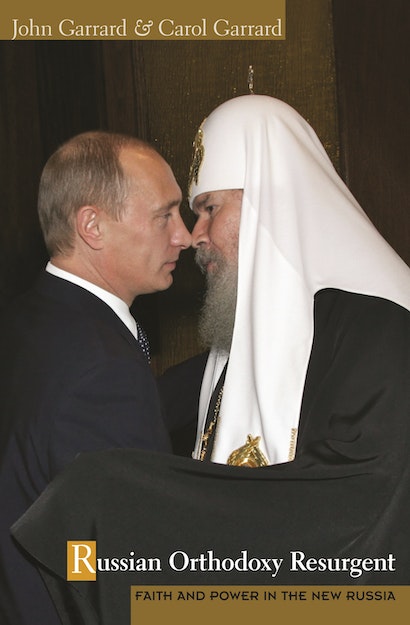 Russian Orthodoxy Resurgent is the first book to fully explore the expansive and ill-understood role that Russia’s ancient Christian faith has played in the fall of Soviet Communism and in the rise of Russian nationalism today. John and Carol Garrard tell the story of how the Orthodox Church’s moral weight helped defeat the 1991 coup against Gorbachev launched by Communist Party hardliners. The Soviet Union disintegrated, leaving Russians searching for a usable past. The Garrards reveal how Patriarch Aleksy II — a former KGB officer and the man behind the church’s successful defeat of the coup — is reconstituting a new national idea in the church’s own image.


In the new Russia, the former KGB who run the country — Vladimir Putin among them — proclaim the cross, not the hammer and sickle. Meanwhile, a majority of Russians now embrace the Orthodox faith with unprecedented fervor. The Garrards trace how Aleksy orchestrated this transformation, positioning his church to inherit power once held by the Communist Party and to become the dominant ethos of the military and government. They show how the revived church under Aleksy prevented mass violence during the post-Soviet turmoil, and how Aleksy astutely linked the church with the army and melded Russian patriotism and faith.

Russian Orthodoxy Resurgent argues that the West must come to grips with this complex and contradictory resurgence of the Orthodox faith, because it is the hidden force behind Russia’s domestic and foreign policies today.

John Garrard is professor of Russian studies at the University of Arizona. Carol Garrard is an independent scholar. Together they are the authors of The Bones of Berdichev: The Life and Fate of Vasily Grossman and Inside the Soviet Writers' Union.

"At the heart of the book is a masterful biography of Alexy himself. . . . An important and meticulously researched book."—Thomas de Waal, Times Literary Supplement

"[The Garrards] focus on Aleksy II's agenda both to reroot Russian Orthodoxy to its claim as the true apostolic succession in Christendom (a challenge to Roman Catholicism's rival claim) and to reidentify it with Russian nationalism. The former claim lies in New Testament texts the Garrards clearly explain, while their discussion of Aleksy II's activities in the latter realm display the authors' supple understanding of Russian patriotism and its religio-military heroes going back to Alexander Nevsky. An important work for students of contemporary Russia."—Gilbert Taylor, Booklist

"After the long dark eclipse of the Soviet period, the Russian Orthodox Church is again central to an understanding of contemporary Russia, and this book provides a fine starting point."—Robert Levgold, Foreign Affairs

"J. Garrard and C. Garrard provide an important portrait of the Russian Church and its role in the establishment of the 'new' Russia. . . . Based on an abundance of contemporary sources, the Garrards tell a fascinating story."—G.P. Cox, Choice

"The Garrards (he a lapsed Anglican, she a practising Lutheran) write evocatively about the history, in elegiac style about the beauty of the architecture, iconography and liturgy, and clear-headedly about nasty aspects such as the church's severe anti-Semitism."—Miriam Cosic, The Australian

"Even though the book's style appeals to a popular readership, scholars will want to study the Garrards' work. Their personal contacts with many Russians active in church life have awarded them priceless insights, within the reach of very few Westerners, and many of the important events they witnessed have not been well covered by news outlets."—John D. Basil, Church History

"This book combines empathy and detailed scholarship, shedding light on the intricacies of church-state relations in the new Russia."—Iannis Carras, opendemocracy.net

"[T]his is an engaging study of a fascinating subject that is essential to our understanding of the new Russia."—Ruth Coates, European Legacy

"The Garrards' monograph is an accessible survey of many aspects of Russian Orthodox history and culture and can serve as a valuable introduction to these topics."—Katja Richters, Journal of Contemporary History

"In this rewarding book, the Garrards humanize and deliver with great learning the epic story of the revival of the Russian Orthodox Church. They illuminate a lost experience by studying the church through the prism of its spectacular civic rebirth. The Garrards give a meticulously detailed account of the rise of Patriarch Aleksy and his successful use of the faith to implant the church and its teachings once again deep into the hearts of Russian people."—Richard Stites, Georgetown University

"This book contains much rich information, colorful detail, and valuable insights. The Garrards know the Russian background intimately. They are dedicated, scrupulous, and immensely hardworking scholars. It is worth reading this book for the footnotes alone."—Rodric Braithwaite, author of Moscow 1941

"A splendid book—scholarly, deeply researched but with the tone of a personal memoir, delivered in a riveting style, and original in its contribution to our reconstruction of Russia's transition out of Communism. The Garrards are marvelous storytellers. Their story will frighten some and reassure others—but either way, this is a book for our times."—Caryl Emerson, Princeton University