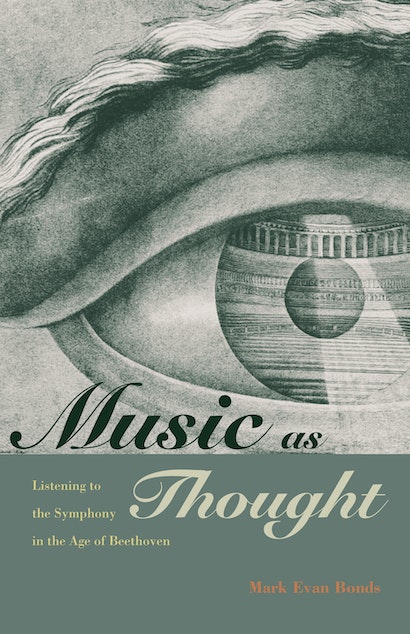 Before the nineteenth century, instrumental music was considered inferior to vocal music. Kant described wordless music as “more pleasure than culture,” and Rousseau dismissed it for its inability to convey concepts. But by the early 1800s, a dramatic shift was under way. Purely instrumental music was now being hailed as a means to knowledge and embraced precisely because of its independence from the limits of language. What had once been perceived as entertainment was heard increasingly as a vehicle of thought. Listening had become a way of knowing.

Music as Thought traces the roots of this fundamental shift in attitudes toward listening in the late eighteenth and early nineteenth centuries. Focusing on responses to the symphony in the age of Beethoven, Mark Evan Bonds draws on contemporary accounts and a range of sources — philosophical, literary, political, and musical — to reveal how this music was experienced by those who heard it first.

Music as Thought is a fascinating reinterpretation of the causes and effects of a revolution in listening.

Mark Evan Bonds is Professor of Musicology at the University of North Carolina, Chapel Hill. His previous books include Wordless Rhetoric: Musical Form and the Metaphor of the Oration and After Beethoven: Imperatives of Originality in the Symphony. He is a former editor in chief of Beethoven Forum.

"This is a cogent and well-illustrated account of the theoretical basis for the changes in how instrumental music was listened to in the early decades of the 19th century. Bonds clarifies complex material and piles up evidence to make a convincing case for a 'revolution in listening.'"—Patricia Howard, Currents

"Philosophical discussion of music can easily become dense, but Bonds presents his arguments and evidence in a clear, discernible manner such that readers with little exposure to the philosophical issues of the time period can follow his reasoning and come away illuminated by a first-hand account concerning the reception of the symphony in the first quarter of the nineteenth century."—John Stine, Music Research Forum

"Through the lucid presentation of many diverse sources and the close reading of several central documents, Music as Thought establishes the cultural force of listening to music in the age of Beethoven. The result is a compelling story with a fresh polemical spin."—Scott Burnham, Princeton University

"Music as Thought navigates the discursive space of nineteenth-century German symphonies, and Beethoven's symphonic music especially, between the pointedly apolitical metaphysics of 'absolute music,' and the explicit political appropriation of these works in the service of emerging German nationalism. It is hard to imagine a topic that would be more central to current musicological discourse."—Alexander Rehding, Harvard University