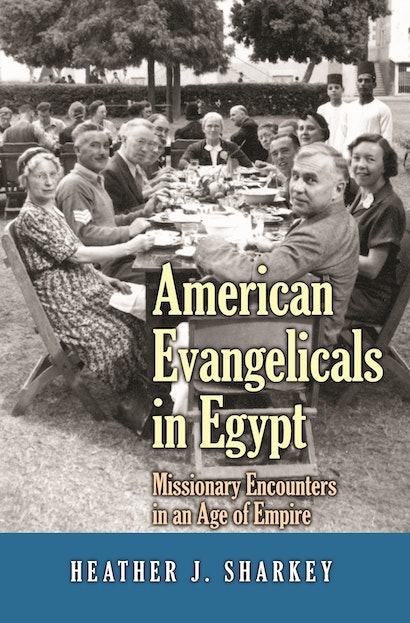 In 1854, American Presbyterian missionaries arrived in Egypt as part of a larger Anglo-American Protestant movement aiming for worldwide evangelization. Protected by British imperial power, and later by mounting American global influence, their enterprise flourished during the next century. American Evangelicals in Egypt follows the ongoing and often unexpected transformations initiated by missionary activities between the mid-nineteenth century and 1967 — when the Six-Day Arab-Israeli War uprooted the Americans in Egypt.


Heather Sharkey uses Arabic and English sources to shed light on the many facets of missionary encounters with Egyptians. These occurred through institutions, such as schools and hospitals, and through literacy programs and rural development projects that anticipated later efforts of NGOs. To Egyptian Muslims and Coptic Christians, missionaries presented new models for civic participation and for women’s roles in collective worship and community life. At the same time, missionary efforts to convert Muslims and reform Copts stimulated new forms of Egyptian social activism and prompted nationalists to enact laws restricting missionary activities. Faced by Islamic strictures and customs regarding apostasy and conversion, and by expectations regarding the proper structure of Christian-Muslim relations, missionaries in Egypt set off debates about religious liberty that reverberate even today. Ultimately, the missionary experience in Egypt led to reconsiderations of mission policy and evangelism in ways that had long-term repercussions for the culture of American Protestantism.

Heather J. Sharkey is an assistant professor in the Department of Near Eastern Languages and Civilizations at the University of Pennsylvania. She is the author of Living with Colonialism: Nationalism and Culture in the Anglo-Egyptian Sudan.

"Sharkey's focus on twentieth-century issues is especially welcome, since relatively few scholars have chosen to concentrate on this phase of Presbyterian mission history. . . . [S]he has added significantly to what can be known about Protestant mission history in the Middle East, the rapidly evolving character of Christian-Muslim relations since the nineteenth century, and the social, cultural, and political aspects of these encounters."—Stanley H. Skreslet, International Bulletin of Missionary Research

"This book will be of interest to several audiences. Specialists will welcome it as a provocative theorization of a critical period in the region's intellectual history. . . . The work will also be of interest to Cold War historians. . . . This is a rich work that succeeds in situating a remarkable chapter in Ethiopian history in a broader, comparative context."—James De Lorenzi, International Journal of African Historical Studies

"American Evangelicals in Egypt is an important book. . . . While some should read the book out of a general interest in Egypt or the history of Presbyterian missions, there is much more to be found here."—David Greenlee, Missiology

"Sharkey . . . offers a lucid account of the activities of American Presbyterians in Egypt for over a century and makes a persuasive case that the missionaries' work had far-reaching ramifications."—Lisa Joy Pruitt, Journal of American History

"Sharkey's book has opened up a neglected field of research in modern Egyptian and Middle Eastern history. More generally, readers and researchers in international, imperial, religious, cultural, social, and political history would do well to make use of Sharkey's many insights."—Donald Malcolm Reid, International History Review

"Sharkey deftly weaves American, Egyptian, and British history based on archival research in both English and Arabic. She impresses the reader with her knowledge of each field and convinces her audience of the interconnectivity of each history in an age of state building and imperialism."—Lisa Pollard, American Historical Review

"Sharkey's excellent study of the history of one particular mission brings into sharp focus the transformation of almost all missionary activity in the course of the past hundred and fifty years."—Hugh Wybrew, Journal of Ecclesiastical History

"A fine piece of historical scholarship: soundly argued and finely nuanced. It is a fair and balanced portrayal of the relationship between American missionaries and Egyptians—both Christian and Muslim."—Dana L. Robert, Boston University

"This book reexamines the history of modern Christian missions and makes an important contribution to new ways of understanding the underlying issues involved in the so-called dialogue of civilizations."—John Voll, Georgetown University