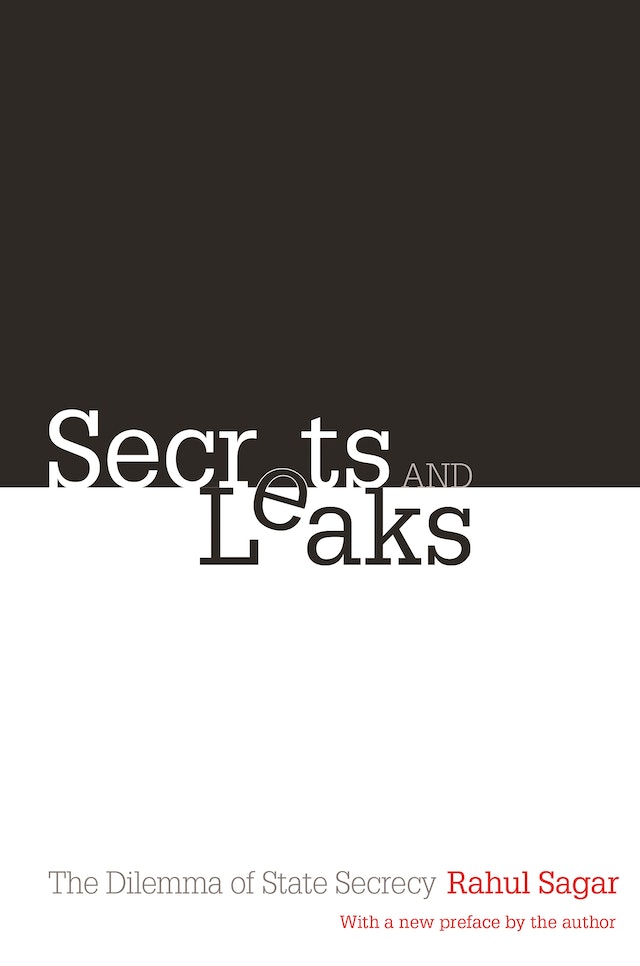 Secrets and Leaks examines the complex relationships among executive power, national security, and secrecy. State secrecy is vital for national security, but it can also be used to conceal wrongdoing. How then can we ensure that this power is used responsibly? Typically, the onus is put on lawmakers and judges, who are expected to oversee the executive. Yet because these actors lack access to the relevant information and the ability to determine the harm likely to be caused by its disclosure, they often defer to the executive’s claims about the need for secrecy. As a result, potential abuses are more often exposed by unauthorized disclosures published in the press.


But should such disclosures, which violate the law, be condoned? Drawing on several cases, Rahul Sagar argues that though whistleblowing can be morally justified, the fear of retaliation usually prompts officials to act anonymously — that is, to “leak” information. As a result, it becomes difficult for the public to discern when an unauthorized disclosure is intended to further partisan interests. Because such disclosures are the only credible means of checking the executive, Sagar writes, they must be tolerated, and, at times, even celebrated. However, the public should treat such disclosures skeptically and subject irresponsible journalism to concerted criticism.

"Were Snowden's leaks justified? Rahul Sagar's Secrets and Leaks sheds important light on the question. In carefully argued and lucid prose, Sagar, a professor of politics at Princeton, argues that secrets are inevitable, as are leaks—and that leaks have an important if precarious part in checking secrecy abuse."—David Cole, New York Review of Books

"This is an excellent book that comes at an essential time. Snowden's leaks, which took place after Sagar finished the book, have focused public debate on the secrecy/transparency paradox, and Sagar's book is infinitely superior to the sloganeering that dominates the media."—Eric Posner, New Republic

"Rahul Sagar's new book Secrets and Leaks: The Dilemma of State Secrecy is both an important new work on the deep problem of political accountability in the context of U.S. government secrecy, and it is an excellent teaching resource."—Mary L. Dudziak, Balkinization

"Sagar makes a compelling argument that leaking plays an important role in uncovering wrongdoing in an arena in which both Congress and the courts are institutionally inhibited."—Gabrielle Appleby, Inside Story

"In his new book, Secrets and Leaks, the Princeton political scientist Rahul Sagar ably documents . . . growth in secrecy and the problems it poses, excavating from his thorough research a concise history of concealment and revelation from the Revolutionary War to the present. Atop this scholarship, he adds legal analysis and an attempt to map a regulatory framework that will keep the country secure, make the government accountable, and still preserve Americans' civil liberties."—Jack Shafer, Foreign Affairs

"[Secrets and Leaks is] a shining deed in a naughty world."—International Affairs

"[A] fresh, original and provocative contribution to the field. . . . [Sagar] is about as critical of his own arguments as he is towards those of others, and readers will be the wiser for it."—Steven Aftergood, Lawfare

"Rahul Sagar's Secrets and Leaks . . . is a thoughtfully considered work that clarifies an unsolvable dilemma at the heart of democratic governance."—Gabriel Schoenfeld, Claremont Review of Books

"Sagar's new book could not come at a more opportune time. As a fresh national and even international debate about the morality of whistle-blowing and state secrecy develops, Sagar presents a compelling set of arguments about the balance between national security and liberty. In doing so, he examines all of the relevant actors: the national security apparatus, the courts, Congress, the leakers, and of course the executive itself. . . . In fact, Secrets and Leaks can be read as a case study in the inexorable tensions of executive power in a liberal democracy. This profound and profoundly important book deserves to inform the on-going debate."—Choice

"Whether one accepts or rejects this conclusion, Secrets and Leaks is a provocative, thoughtful, and important contribution to our understanding."—Geoffrey R. Stone, Political Science Quarterly

"In this provocative and original book, Rahul Sagar resolves a core dilemma of executive power in a democracy. He shows how the justification for secrecy and accountability for its misuse both hover outside the normal legal order. Elegant in its symmetry and uncanny in its timing."—Jeffrey K. Tulis, University of Texas at Austin

"Rahul Sagar investigates the mirror problems of government secrecy and the leaking of government secrets. There are no easy solutions to these problems, and Sagar doesn't pretend there are. Instead, he provides a rigorous, judicious, and clear-eyed analysis of the tradeoffs that policymakers must make, and the uneasy compromises that must be reached. The book comes at a vital time, and is indispensable for current debates about NSA surveillance and related counterterrorism activities."—Eric A. Posner, coauthor of The Executive Unbound

"A truly excellent and provocative book. Secrets and Leaks makes an outstanding contribution to an issue of contemporary concern that will not go away—and will probably become far more serious—in the future."—Sanford Levinson, author of Our Undemocratic Constitution

"Sagar examines the very hot topic of the role of leaks and whistleblowing in democracy. He argues that they are fundamental to democratic politics generally and American democracy specifically, but he is subtle and informed enough to recognize the dangers of whistleblowing, particularly on matters of national security. Sagar could well launch a new literature on the subject."—Corey Brettschneider, author of When the State Speaks, What Should It Say?