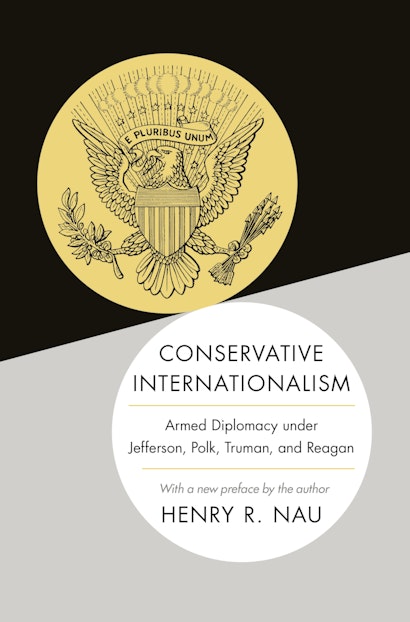 Nau explores conservative internationalism in the foreign policies of Thomas Jefferson, James Polk, Harry Truman, and Ronald Reagan. These presidents did more than any others to expand the arc of freedom using a deft combination of force, diplomacy, and compromise. Since Reagan, presidents have swung back and forth among the main traditions, overreaching under Bush and now retrenching under Obama. Nau demonstrates that conservative internationalism offers an alternative way. It pursues freedom but not everywhere, prioritizing situations that border on existing free countries—Turkey, for example, rather than Iraq. It uses lesser force early to influence negotiations rather than greater force later after negotiations fail. And it reaches timely compromises to cash in military leverage and sustain public support.

A groundbreaking revival of a neglected foreign policy tradition, Conservative Internationalism shows how the United States can effectively sustain global leadership while respecting the constraints of public will and material resources.

Henry R. Nau is professor of political science and international affairs in the Elliott School of International Affairs at George Washington University.

"In the wake of Syria-related brinkmanship, it is easy to see, at the moment, how enduringly important it is to manage force in human affairs. . . . [Nau] identifies six traditions in American diplomatic history and connects each to at least one important president whose policies capture the tradition's outlook . . . the general reader can learn a good deal."—Wall Street Journal

"Nau is interesting, provocative, and sometimes convincing when he looks for signs of conservative internationalism through the long sweep of U.S. history. His description of that school of thought alone makes this book worth reading. . . . This is a valuable way of thinking about U.S. foreign policy for a post-Bush, post-Obama future."—Foreign Affairs

"Conservative Internationalism offers a rigorous and thought provoking conceptual look into an important dimension of U.S. foreign policy. It raises in particular the question of whether the literature on American liberal internationalism focuses too much on the 'liberal' and not enough on the 'internationalism.' If so, Nau tilts back the balance here."—Nicolas Bouchet, International Affairs

"Throughout this tightly reasoned book, Nau carefully defines relevant terms, identifies the key features and principles of conservative internationalism, and distinguishes it from nationalism, realism, and liberal internationalism. . . . This book would be a solid addition to courses on foreign policy or American politics."—Choice

"[Nau] has presented a useful reference work for researchers attempting to determine what inspires U.S. presidents to go to war and what dissuades them."—Wes Vernon, Washington Times

"In this book, Henry Nau accomplishes the seemingly impossible, by recovering conservative internationalism as one of America's long-standing and respected foreign policy traditions. In eliciting vigorous engagement from all political sides, his dispassionate and learned book makes us reexamine some of our most cherished assumptions about core aspects of world politics. No serious student of American foreign policy can afford not to read this book closely."—Peter J. Katzenstein, Cornell University

"Henry Nau is one of our wisest scholars of international relations, and that wisdom is on full display here. Cutting across today's exhausted political categories, his book is a vision of limited government and personal liberty at home and abroad, achieved through an international engagement pioneered by Thomas Jefferson and developed by three of America's most successful presidents. It is a vision that will surprise and challenge conservatives, liberals, and realists alike."—John Owen, University of Virginia

"Arguing for the existence and advantages of a distinct American foreign policy tradition called conservative internationalism, this book is engaging, very well organized, and entirely relevant to current U.S. foreign policy problems. Grounded in a serious reading of the historical literature, and informed by a clear awareness of the main theoretical debates on the subject, this work is a worthy contribution to the field. There is no other book like it."—Colin Dueck, George Mason University

"In this compelling book, Nau identifies and defines conservative internationalism as an important but overlooked tradition in American foreign policy, from the time of Jefferson to Reagan. It is grounded in a deep understanding of American strategy and diplomatic history, and is integrated with a sophisticated treatment of competing currents in foreign policy analysis and prescription."—Robert J. Lieber, author of No Common Power: Understanding International Relations