An entertaining, enlightening, and humorous graphic narrative of the dangerous thinkers who laid the foundation of modern thought 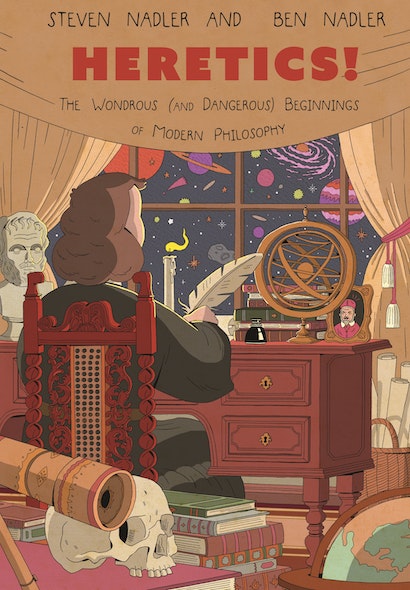 This entertaining and enlightening graphic narrative tells the exciting story of the seventeenth-century thinkers who challenged authority—sometimes risking excommunication, prison, and even death—to lay the foundations of modern philosophy and science and help usher in a new world. With masterful storytelling and color illustrations, Heretics! offers a unique introduction to the birth of modern thought in comics form—smart, charming, and often funny.

These contentious and controversial philosophers—from Galileo and Descartes to Spinoza, Locke, Leibniz, and Newton—fundamentally changed the way we look at the world, society, and ourselves, overturning everything from the idea that the Earth is the center of the cosmos to the notion that kings have a divine right to rule. More devoted to reason than to faith, these thinkers defended scandalous new views of nature, religion, politics, knowledge, and the human mind.

Heretics! tells the story of their ideas, lives, and times in a vivid new way. Crisscrossing Europe as it follows them in their travels and exiles, the narrative describes their meetings and clashes with each other—as well as their confrontations with religious and royal authority. It recounts key moments in the history of modern philosophy, including the burning of Giordano Bruno for heresy, Galileo’s house arrest for defending Copernicanism, Descartes’s proclaiming cogito ergo sum, Hobbes’s vision of the “nasty and brutish” state of nature, and Spinoza’s shocking Theological-Political Treatise.

A brilliant account of one of the most brilliant periods in philosophy, Heretics! is the story of how a group of brave thinkers used reason and evidence to triumph over the authority of religion, royalty, and antiquity.

Steven Nadler is the William H. Hay II Professor of Philosophy and Evjue-Bascom Professor in the Humanities at the University of Wisconsin–Madison. His books include Spinoza: A Life, which won the Koret Jewish Book Award, and Rembrandt's Jews, which was a finalist for the Pulitzer Prize. He lives in Madison. Ben Nadler is a graduate of the Rhode Island School of Design and an illustrator. He lives in Chicago. Follow him on Instagram at @bennadlercomics. 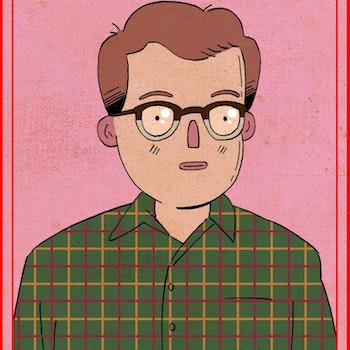 "As the title suggests, this book seldom has a dull moment. . . . In the bright panels that lay out a who's who of European philosophers [Heretics!] adopts a very simple but beautiful visual and textual format. . . . It’s a wonderful addition to the tradition of graphic nonfiction, and readers should be able to breeze through it."—Publishers Weekly

"What's not to like? Philosopher Steven Nadler and illustrator Ben Nadler have crafted an absolute gem of a science history, capturing with gravitas and zing the abstruse musings of René Descartes on mind-body dualism, John Locke on empiricist epistemology, and more."—Barbara Kiser, Nature

"Bring[s] both entertainment and enlightenment to the subject of how modern philosophical thought challenged the church's doctrine on the relationship between God and man and led to democratic challenges to monarchy and the divine right of kings. . . . Nimbly advance[s] through a little more than a century in fewer than 200 pages, presenting a primer that can instruct those new to the period while serving as a refresher for readers who have forgotten what they studied in history and philosophy."—Kirkus

"A quick introduction to the basic figures and concepts of modern philosophy as it was developed in the 17th century. René Descartes, Francis Bacon, Baruch Spinoza, and other philosophers pop up to discuss, and sometimes argue, about the nature of matter, the existence of God, mind-body dualism, the structure of society, and even the existence of knowledge itself. The authors use quotes from the philosophers themselves and quickly place them in historical context, and the lively illustrations keep the narrative from getting bogged down."—Brigid Alverson, School Library Journal

"Being a philosopher in the 17th century was a dangerous career choice. At odds with the Catholic church, Western philosophy found itself in a precarious position that would sometimes end in violence. Written by the father-son team Steven and Ben Nadler, the comic book aims to turn the trials of early scientific thought into a riveting graphic narrative. With the help of colorful illustrations and jokes, the duo is able to make complicated philosophical ideas easier to digest for a larger group of readers as well as offer up plenty of drama."—Mental Floss

"A remarkable new book. . . . Thanks to Princeton, we now have philosophy delivered in graphic form. . . . The Nadlers, father and son, have given us an informed but light-hearted look at the heaviest subjects: God, man and the cosmos. It's engaging, like much graphic work, and altogether accessible."—Robert Fulford, National Post

"The art is the best thing about Heretics!, which traces the connections among influential 17th-century European philosophers. Most of the book's humor comes from the relationship between the lofty ideas expressed and the goofy situations."—Book Riot

"Heretics! is an excellent read that will not only teach you a bit about modern philosophy, but will also put a smile on your face. . . . I recommend this graphic novel to anyone interested in learning a bit more about the history of modern philosophy that doesn't involve delving into tomes like Meditations, Ethics, or Leviathan."—Comic Bastards

"With its delightful visuals and simplistic way of presenting complex topics, Heretics! has what it takes to become a classic, or even better yet—pioneer a new literary genre. It's extremely rare to come across a book that’s innovative in form as well as in content, but I think Heretics! just deserves those accolades. Masterfully mixing a comic book style with complex notions from science and philosophy, Heretics! manages to charm and educate at the same time, and it does all this in style."—Mihai Andrei, ZME Science

"Take your beach reading a step further with this graphic novel about the 17th-century Western philosophers who bravely said ‘nah' to the status quo set by that era’s religions and royal leaders. Written and illustrated by the father-son team Steven and Ben Nadler, this interesting and funny graphic novel dives into the backstories of historical powerhouses, including Galileo, Baruch Spinoza, and John Locke. It’s the ‘birth of modern thought’ via comics, and you’ll become an expert on this time period without realizing it by the time you’re through."—Sarah Sloat, Inverse

"In this telling of the story of modern philosophy, esteemed historian of philosophy Steven Nadler . . . teams with his son, illustrator Ben Nadler, to turn these complex theories into a visual journey through the history of ideas. . . . Ben Nadler's art is colorful and expressive, and he has taken some pains to make these figures look like their ‘classic’ depictions from historical art."—PopMatters

"In yet another example of sequential art's awesome versatility, the Nadlers, an award-winning philosophy professor father (Spinoza; Rembrandt’s Jews) and his illustrator son, take on the heady subject of 17th-century Western European philosophy, producing a primer that clearly explains oft-complex ideas with accessible prose and colorful, witty artwork. . . . The creators bring the great thinkers face-to-face to debate, using colloquialisms and anachronisms to hilarious effect, and demonstrate where they agreed and differed, thus reviewing the material for readers rather than forcing them to go back and reread previous pertinent pages. In the Nadlers’ capable hands, seminal philosophy and the graphic novel combine in serious fun for the learned and laypeople alike."—Library Journal

"Team Nadler manage to convey complex information economically and wittily, in large part thanks to the images which are more than mere illustration. [Ben] Nadler gives us genuinely visual metaphors. . . . An impressive overview."—Adam Ferner, Daily Nous

"For those of us who hope to revive in memory what our liberal arts educations were supposed to leave us with for life, it is with pleasure that I can say that [Steve and Ben Nadler] have collaborated on a fine formula in which the narrative zip (and overall entertainment value) of the cartoon format lend critical aid to the project of introducing—or reintroducing—readers to philosophy's revolutionary era. . . . And we are given that friendly nudge to familiarize ourselves with these people, not only to grasp how we arrived at our way of comprehending and being in the world, but to keep on questioning."—Peter Lewis, Barnes & Noble Review

"An entertaining book that will keep the interest of all readers. . . . The color illustrations keep the text moving at a brisk pace. The authors are excellent story tellers. . . . An enjoyable read for any science teacher. The engaging nature of the stories makes it easy for the reader to learn about the ideas and stories of the philosophers and scientists who laid the groundwork for our modern world. Teachers could also use this book to help students understand the origins of our modern scientific thinking."—Thomas Brown, NSTA Recommends

"Steven and Ben Nadler (philosopher and illustrator) aren't the first to locate the birth of the modern world in the 17th century, but they're possibly the first to do it in comic-book form. The result is an informed and entertaining beginner's guide through the most revolutionary century in the history of ideas: dangerous ones, forged in a violent time, that clashed with the dictates of the Catholic church in such a way that when they'd finished (Galileo, Descartes, Newton etc) ordinary people looked at the world in a truly modern way."—Steven Carroll, Sydney Morning Herald

"A fantastic graphic historical recording of the evolution and emergence of philosophic thought during the 17th century. Skillfully sketched and painted in antique colors, the graphic scenes themselves depict the background intrigues that enrich the commentaries."—Aron Row, San Francisco Book Review

"Entertaining and thoughtful. . . . If you're already familiar with 17th-century philosophy, Heretics! is a delightful refresher; if you’re not, it’s a fine introduction."—Dianne Timblin, American Scientist

"An excellent book which gives the reader a concise and chronological history of philosophy from the 17th century. The story by Seven Nadler, is definitely written with passion, as his love for these subjects shine through every panel. The art by Ben Nadler, is vibrant and gorgeous."—Graphic Policy

"Set out in a highly original cartoon strip form, this book tells the story of the birth of modern philosophy and political freedom in the 17th century. . . . An entertaining and informative read."—David Lorimer, Paradigm Explorer

"[A] highly entertaining introduction to the founding fathers of modern philosophy."—Thomas Klikauer, Philosophy in Review

"Heretics! is an easy, fun read that is deceptively replete with historical detail and philosophy. . . . Nadler and Nadler have been successful at bringing philosophy to comics and comics to philosophy."—Kirsten Gerdes, Reading Religion

"With its engaging, playful graphics, Heretics! combines narrative immediacy, intimacy, and warmth, reminding us that philosophy and history are alive, and bringing abstract and complex ideas back down to earth—faithfully, concisely, and wittily."—Ivan Brunetti, author of Cartooning: Philosophy and Practice

"The revolutionary beginnings of modern thought are brought vividly and amusingly to life in this masterful and entertaining book."—Anthony Gottlieb, author of The Dream of Enlightenment

"Steven Nadler and Ben Nadler's graphic exploration of the thinkers of the seventeenth century is brimming with information concisely expressed, and the illustrations add an extra dimension of irreverent wit to the text, truly earning it its proud title of Heretics!"—Rebecca Newberger Goldstein, author of Plato at the Googleplex: Why Philosophy Won’t Go Away

"Heretics! is a triumph of modern comic art. It will be widely read by those of any age seeking a way into the vast and many-sided transition to modern thought and life."—Paul Buhle, coeditor of Wobblies!: A Graphic History of the Industrial Workers of the World

"Heretics! is very charming, with a zippy, whimsical text and attractive illustrations."—Daniel Garber, editor of The Cambridge History of Seventeenth-Century Philosophy