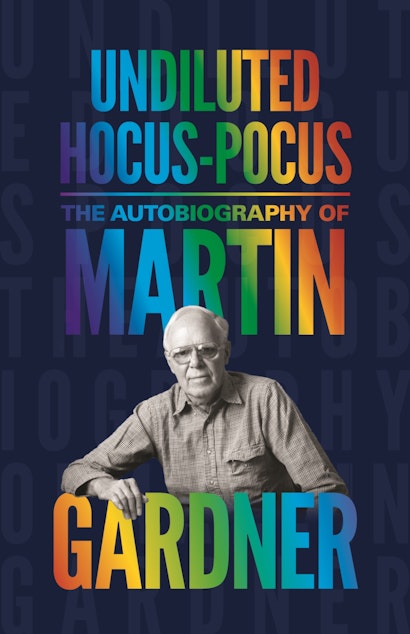 Martin Gardner wrote the Mathematical Games column for Scientific American for twenty-five years and published more than seventy books on topics as diverse as magic, religion, and Alice in Wonderland. Gardner’s illuminating autobiography is a candid self-portrait by the man evolutionary theorist Stephen Jay Gould called our “single brightest beacon” for the defense of rationality and good science against mysticism and anti-intellectualism.

Gardner takes readers from his childhood in Oklahoma to his varied and wide-ranging professional pursuits. He shares colorful anecdotes about the many fascinating people he met and mentored, and voices strong opinions on the subjects that matter to him most, from his love of mathematics to his uncompromising stance against pseudoscience. For Gardner, our mathematically structured universe is undiluted hocus-pocus—a marvelous enigma, in other words.

Undiluted Hocus-Pocus offers a rare, intimate look at Gardner’s life and work, and the experiences that shaped both.

Martin Gardner (1914–2010) was an acclaimed popular mathematics and science writer. His numerous books include The Annotated Alice, When You Were a Tadpole and I Was a Fish, and Fads and Fallacies in the Name of Science. 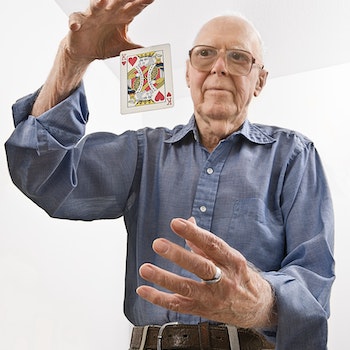 "His radiant self lives on in his massive and luminous literary output and shines at its sweetest, wittiest and most personal in Undiluted Hocus-Pocus."—Teller, New York Times Book Review

"For those of us who believe that the sciences and the humanities don't have to be enemies, Martin Gardner is an inspiring model. Undiluted Hocus-Pocus reveals a man immersed in philosophy, religion and literature, even as he makes a career writing about science."—Jordan Ellenberg, Wall Street Journal

"Readers who only know Gardner for his math and science writing will be surprised at his focus on religion, and this autobiography demonstrates his passion to explain and understand the world around him."—Publishers Weekly

"Zealously debunking science fads and declaring his bafflement at the human brain, maths writer Martin Gardner was on fine form in this posthumous memoir."—Nature

"For half a century, Martin Gardner (1914-2010) was an international scientific treasure. . . . Gardner's passion for writing and his warmth and humour shine forth on every page of this book, making it a memoir of a great human being."—David Singmaster, Nature

"The style is that of a memoir, conversationally phrased, and not afraid to be sidetracked occasionally by an amusing aside. Gardner paints vividly an inside picture of American intellectual life in the twentieth century, coloured by honest accounts of the many influential figures with whom he came into contact."—Alexander Shannon, Plus

"In summary, I give this book the highest praise that I can possibly give an autobiography: it was much too short."—Charles Ashbacher, MAA Reviews

"[Undiluted Hocus-Pocus] is the most sincere, unadulterated biography I ever read. . . . [D]etails of his life and personality exposed in the book help create a more complete picture of this fascinating person. . . . Martin Gardner had tremendous influence on several generations of young minds; his autobiography will help his fans appreciate how that came about. This is a book no one who ever heard his name would want to miss."—Cut the Knot Insights

"I only wish his autobiography was twice as long, for I never tire of reading him and feeling enriched. . . . And thank you Martin for this last, final, further peek into your brilliant, fertile, curious, nimble, incisive, probing, captivating life and mind."—Math Tango

"Undiluted Hocus-Pocus reminds us how Gardner taught many of us how to play the game of mathematics better."—Mathrecreation blog

"A case can be made, in purely practical terms, for Martin Gardner as one of the most influential writers of the 20th century. His popularizations of science and mathematical games in Scientific American, over the 25 years he wrote for them, might have helped create more young mathematicians and computer scientists than any other single factor prior to the advent of the personal computer. . . . Gardner was capable of appealing to the literary side of left-brained sorts, and did so with . . . taste and restraint. . . . Undiluted Hocus-Pocus, his posthumously published autobiography . . . reveals the sort of mentality that shaped itself around his encyclopedic interests."—David Auerbach, Los Angeles Review of Books

"[This book] will be an eye-opener knowing that Martin Gardner was active on so many diverse fields."—European Mathematical Society

"The book is just a delight to read."—Stephen Hirtle, Pittsburgh Post-Gazette

"Here my guru and sage brought together, over the course of two hundred pages, the full range of his interests—math, magic, philosophy, stories, poetry, science, religion, politics—and combined these disparate topics with an account of his private life and intellectual development. I enjoyed every page of this book."—Ted Gioia, Millions

"Reading Martin Gardner's autobiography is like spending a pleasant afternoon in the company of a 95-year-old man with sharp memories and a twinkle in his eye. Oh wait, that's what it is."—Science Musings

"This book describes some of the pivotal moments in the life of prolific author/journalist Martin Gardner (1914-2010), who is best known for his illuminating and entertaining contributions to Scientific American magazine from 1956 to 1981. Fans of Martin Gardner will find this posthumously published autobiography fascinating."—Choice

"[H]ighly readable. Even those well familiar with Gardner's writings, although they will be acquainted with much of the ground covered, will still make several new discoveries. The foreword by Persi Diaconis will also interest mathematicians."—Leon Harkleroad, Zentralblatt Math

"For all his fame, Gardner was a humble, generous man, always modest about his mathematical achievements. His humanity, humor, and sheer decency shine through every page. Reading this book is like chatting with him about his intellectually adventure-filled life for a whole weekend."—Colm Mulcahy, Math Horizons

"At the age of 95 he wrote this . . . charming and informative autobiography covering an incredibly prolific and productive life that should inspire anyone who encounters it."—AAAS

"Martin Gardner as one of those rare and valuable writers who could venture into the worlds of science and mathematics as an intelligent and interested layman, and then entertain the rest of us with his discoveries."—Jon Wainwright, Skeptic Magazine

"Informative, original, unexpected, and always charmingly written with his uniquely subtle sense of fun, this final autobiographical work of Martin Gardner, Undiluted Hocus-Pocus, sums up his own life and opinions, in the way that has become so familiar and inspirational to us from his well-known writings on puzzles, mathematics, philosophy, and the oddities of the world."—Roger Penrose, author of Cycles of Time: An Extraordinary New View of the Universe

"Martin Gardner was the most learned man I have ever met. He wrote articles and books for mathematicians, magicians, and puzzle lovers, and he didn't even get quantum mechanics wrong! Now you can read how this amazing man came to be so amazing."—John Conway, John von Neumann Distinguished Professor Emeritus, Princeton University

"A curious read, reminiscent of Uriah Fuller's attempts to persuade the nonbelievers. I'm left wondering if Gardner's questions have now been answered—which to some readers will always be an intriguing paradox!"—attributed to Armand T. Ringer

"Martin is gone, but his depth and clarity will illuminate our world for a long time."—from the foreword by Persi Diaconis

"A huge intellect, a prolific author, and a caring, responsible citizen of the world."—from the afterword by James Randi

"Undiluted Hocus-Pocus is a book that every fan of Gardner will want to own."—Ron Graham, coauthor of Magical Mathematics

"Martin Gardner occupies a special place in twentieth-century mathematics. More than any other single individual, he inspired a generation of young people to study math. Years from now, people reading his books and marveling at the clarity of his expository style will want to know who he was. How better to satisfy that curiosity than by letting Gardner himself tell the story of his life?"—Barry Cipra, coauthor of What's Happening in the Mathematical Sciences