A groundbreaking account of how religion made society possible 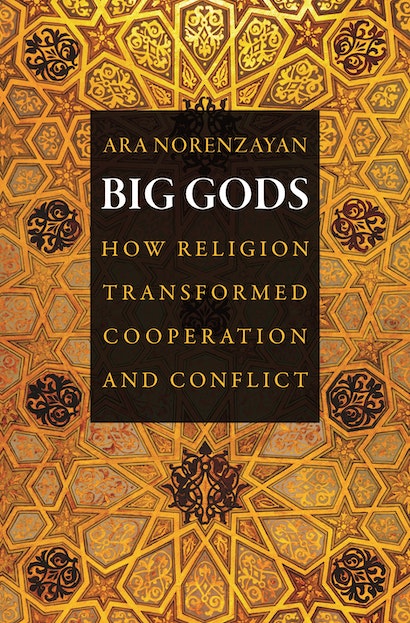 How did human societies scale up from tight-knit groups of hunter-gatherers to the large, anonymous, cooperative societies of today—even though anonymity is the enemy of cooperation? How did organized religions with “Big Gods”—the great monotheistic and polytheistic faiths—spread to colonize most minds in the world? In Big Gods, Ara Norenzayan makes the surprising argument that these fundamental puzzles about the origins of civilization answer each other.

Sincere faith in watchful Big Gods unleashed unprecedented cooperation within ever-expanding groups, yet at the same time it introduced a new source of potential conflict between competing groups. And in some parts of the world, societies with atheist majorities—some of the most cooperative and prosperous in the world—have climbed religion’s ladder, and then kicked it away.

Big Gods answers fundamental questions about the origins and spread of world religions and helps us understand the rise of cooperative societies without belief in gods.

Ara Norenzayan is professor of psychology at the University of British Columbia. His work has been featured on the BBC and CNN, and in the New York Times Magazine. 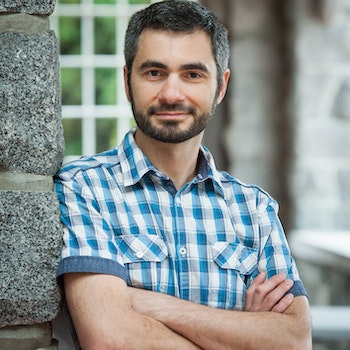 "Ranging across quantitative studies, historical cross-cultural examples, theological texts, and the practices of believers, Norenzayan convincingly argues that religions with Big Gods are successful because they generate a sense of being watched and regulated, require extravagant displays of commitment that weed out religious impostors, and encourage solidarity and trust."—Publishers Weekly

"I found this book insightful, well-written, and to the point."—Tyler Cowen, Marginal Revolution

"The book is a breakthrough, and will undoubtedly influence scientific perspectives on religion and secularism. . . . Without a doubt, Big Gods is a seminal and outstanding book, rocketing the psychological and evolutionary understanding of faith and secularization to new heights and new questions. I strongly recommend it to anyone interested in human evolution, psychology, and the scientific study of religion."—Michael Blume, Evolution: This View of Life

"Once in a while, a whole field of research is pushed forward by a seminal work. Ara Norenzayan's Big Gods: How Religion Transformed Cooperation and Conflict is one of those rare books bound to becoming a classic for a generation of colleagues and students."—Michael Blume, SciLogs

"This is an impressive work; it demonstrates how and why the Big Gods are still with us, and watching."—Reference & Research Book News

"I recommend it to readers interested in the relationships between religions, the non-religious, and nation states. It should be required reading for psychologists and sociologists."—John Harney, Magonia

"[T]his book is great value for the money: it provides energy, intriguing ideas and a joyous display of a fine mind, one that swoops and soars and frequently stops to preen, like some brightly coloured bird in an Edenic rainforest."—Donald Harman Akenson, Literary Review of Canada

"Norenzayan weaves in one convincing scientific study after another, leaving me (as a study junkie) highlighting about every page. . . . His thesis is fascinating and well worth a read (or two). Norenzayan is not prescribing a way to end religion or to suggest that one form of thinking over another is better, but to get at the underlying factors that bring a society from big gods to secularity. I'm sure any deeply held convictions about the nature of religion and disbelief will be challenged tremendously by Big Gods, and as any analytical thinker would probably say, why shouldn't they?"—Brandon G. Withrow, Discarded Image

"Norenzayan analyzes religion primarily as a mechanism for enforcing social cooperation, a problem for which the evolution of increasingly more powerful gods provides a solution in increasingly large and complex societies. . . . With consistently clear organization and thorough documentation, this book combines explanations for cognitive belief in supernatural entities with social explanations of religion's function, advancing readers' understanding of how the former serves the latter."—Choice

"Norenzayan's book provides the best collection and dissemination of research regarding religion as a cultural adaptation for prosociality and cooperation among groups. It sets forth an important agenda for research among psychologists, religious scholars and historians."—James A. Van Slyke, Philosophy, Theology, and the Sciences

"Ambitious, comprehensive and well-delivered. . . . Norenzayan presents an empirically grounded, coherent and overall persuasive attempt to solve some of the great puzzles in the social sciences. Drawing from several disciplines, he skillfully describes the interplay between the origins of religion and society, toward the form we know today."—Filip Uzarevic, Religion and Society in Central and Eastern Europe

"People love origin stories, and this is ours—a fascinating and accessible account of how Big Gods helped us make the leap from hunter-gatherers to gigantic and religiously diverse societies. But this book is not just about the past. Norenzayan gives us a nuanced account of secularism, and offers us some surprising tools we can use to create more ethical organizations and societies going forward."—Jonathan Haidt, author of The Righteous Mind: Why Good People Are Divided by Politics and Religion

"Does God make us good? In this fascinating new book, Ara Norenzayan explores how the invention of Big Gods—powerful and omniscient moralizing deities—has transformed the world. Replete with insights about morality, cooperation, faith, atheism, and much more, Big Gods will change the way we think about human nature and human society."—Paul Bloom, author of Just Babies: The Origins of Good and Evil

"Of all the topics forbidden debate in polite company, religion is the last taboo. This brave, lucid, balanced blend of compassion and science tackles our most cherished values and most intractable disputes. Big Gods sheds light on the cultural evolution of sacred watchers who arguably make us better humans. And it opens the door to explain how and when secular institutions can do the same. For all of us who worry about the role of religion in the modern world, this is a must-read, original milestone."—Susan T. Fiske, coauthor of Social Cognition: From Brains to Culture

"In this bold and important work, the brilliant young social scientist Ara Norenzayan offers a profound new perspective on religion and atheism, arguing that some gods were more effective than others at promoting trust and cooperation among strangers. The rich narrative ranges all over the world, covering not only religious people and the difference between big and little gods but also the puzzling durability of widespread prejudice against atheists. Packed with information extending from international social trends to findings from scientific experiments, this deeply thought-provoking book will change the way you understand the connection between religion and social life."—Roy F. Baumeister, coauthor of Willpower: Rediscovering the Greatest Human Strength

"This is by far the most accessible and comprehensive synthesis of the new social and cognitive science of religion. Ara Norenzayan combines ingenious cross-cultural experiments and judicious historical analysis to give an original evolutionary account of the civilization-creating idea of Big Gods. He also provides a compelling exploration of the ongoing global competition for humanity's heart and mind between the monotheisms and various forms of atheism that represent God's secular offspring, including the great ideologies of the modern era and perhaps science itself."—Scott Atran, author of In Gods We Trust: The Evolutionary Landscape of Religion

"In a time of heated debate about the origin and function of religion, Ara Norenzayan provides a much-needed, well-written argument based on extensive research. The data reveal how religion impacts human behavior. His view that an omniscient God is our own creation designed to deal with the problem of freeriders deserves much more attention. It brings faith closer to where Darwin thought it belonged, in the sphere of social life and cooperation."—Frans de Waal, author of The Bonobo and the Atheist

"This is a terrific book. Authoritative, clear, and written in a straightforward, entertaining style, it deals with a problem of great interest to a wide range of general readers and academics, including psychologists, anthropologists, historians, and sociologists."—Robert Boyd, coauthor of Not by Genes Alone: How Culture Transformed Human Evolution