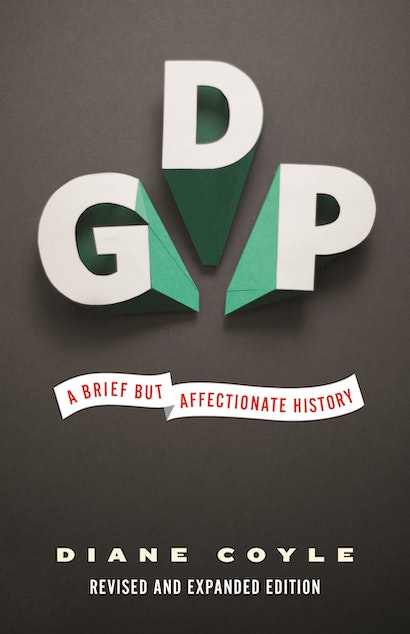 Diane Coyle traces the history of this artificial, abstract, complex, but exceedingly important statistic from its eighteenth- and nineteenth-century precursors through its invention in the 1940s and its postwar golden age, and then through the Great Crash up to today. The reader learns why this standard measure of the size of a country’s economy was invented, how it has changed over the decades, and what its strengths and weaknesses are. The book explains why even small changes in GDP can decide elections, influence major political decisions, and determine whether countries can keep borrowing or be thrown into recession. The book ends by making the case that GDP was a good measure for the twentieth century but is increasingly inappropriate for a twenty-first-century economy driven by innovation, services, and intangible goods.

Diane Coyle is professor of economics at the University of Manchester. She runs the consultancy Enlightenment Economics, and as well as a regular blog, she is the author of numerous books, including The Economics of Enough and The Soulful Science: What Economists Really Do and Why It Matters (both Princeton).

"GDP is, as Diane Coyle points out in her entertaining and informative GDP: A Brief but Affectionate History, a bodge, an ongoing argument."—John Lanchester, London Review of Books

"[A] little charmer of a book. . . . GDP: A Brief but Affectionate History is just what the title promises. . . . Cowperthwaite himself would nod in agreement over Ms. Coyle's informed discussion of what the GDP misses and how it misfires. . . . Ms. Coyle—a graceful and witty writer, by the way—recounts familiar problems and adds some new ones. . . . [E]xcellent."—James Grant, Wall Street Journal

"Anyone who wants to know how GDP and the SNA have come to play such important roles in economic policy-making will gain from reading Coyle's book. As will anyone who wants to gain more understanding of the concept's strengths and weaknesses."—Nicholas Oulton, Science

"Diane Coyle's book is as good a simple guide as we are likely to see."—Samuel Brittan, Financial Times

"Coyle does good work explicating a topic that few understand, even if it affects each of us daily. A pleasure for facts-and-numbers geeks, though accessibly written and full of meaningful real-world examples."—Kirkus Reviews

"In a charming and accessible new book, Diane Coyle untangles the history, assumptions, challenges and shortcomings of this popular rhetorical device, which has become so central to policy debates around the world. . . . Coyle's book is a good primer for the average citizen as well as the seasoned economist."—Adam Gurri, Ümlaut

"[I]t is interesting and important, particularly when it comes to the emphasis now given to GDP, and the inadequacies of this now time-honoured measurement of how our economies are doing. . . . With clarity and precision, she explains its strengths and weaknesses."—Peter Day, BBC News Business

"Diane Coyle has bravely attempted in a recent book to make the subject once more accessible, and even interesting."—John Kay, Financial Times

"[T]his is as engaging a book about GDP as you could ever hope to read. It falls into that genre of books that are 'biographies of things'—be they histories of longitude, the number zero or the potato—and is both enlightening and entertaining."—Andrew Sawers, FS Focus

"As a potted history of approaches to quantifying national output from the 18th century onward, GDP: A Brief but Affectionate History deserves high marks. It is particularly edifying to learn about the military motivation behind the initial attempts."—Martin S. Fridson, Financial Analysts Journal

"The strongest part of the book charts the development of national accounting from the 17th century through to the creation of GDP itself and its literal and metaphorical rises and falls in the 20th and 21st centuries. . . . This is lively and surprisingly readable stuff."—Eilís Lawlor, LSE Review of Books

"Coyle has written an engaging, introductory to mid-level book on the GDP that makes sense of a statistic that hardly anyone actually understands. . . . It does not require any training in economics, but it covers many topics that even professional economists would find beneficial, including an argument that GDP is an increasingly inappropriate measure for the 21st century."—Choice

"[A] little charmer of a book."—Wall Street Journal

"GDP is a thought-provoking account of how the gross domestic product statistic came to be so important. . . . The book is a useful and timely contribution."—Louise Rawlings, Economic Record

"Diane Coyle renders GDP accessible and introduces a much-needed historical perspective to the discourse of what we measure and why. A must-read for those interested in the far-reaching impact of GDP on the global economy, just as we seek ways to go beyond it."—Angel Gurría, secretary-general of the Organisation for Economic Co-operation and Development

"Countries are judged by their success in producing GDP. But what is it and where do those numbers reported on television come from? Diane Coyle makes GDP come to life—we see its strengths and its fallibilities, and we learn to understand and respect both."—Mervyn King, governor of the Bank of England, 2003-2013

"This is an engaging and witty but also profoundly important book. Diane Coyle clearly and elegantly explains the fundamental difficulties of GDP—and how this headline figure is liable to radical change by apparently simple changes in method. She also provides a nice treatment of alternative proposals such as happiness surveys."—Harold James, author of Making the European Monetary Union

"GDP: A Brief But Affectionate History is a fascinating 140-page book that I cannot recommend highly enough. This is simply the best book on GDP that I've ever seen."—John Mauldin

"Well written, interesting, and useful, this book will appeal to many readers. I learned a lot from it."—Robert Hahn, University of Oxford