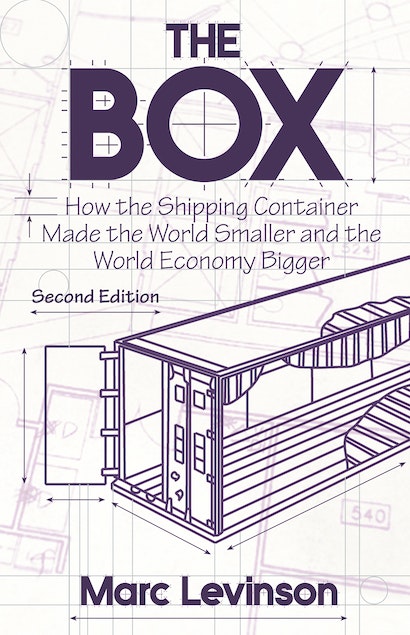 In April 1956, a refitted oil tanker carried fifty-eight shipping containers from Newark to Houston. From that modest beginning, container shipping developed into a huge industry that made the boom in global trade possible. The Box tells the dramatic story of the container’s creation, the decade of struggle before it was widely adopted, and the sweeping economic consequences of the sharp fall in transportation costs that containerization brought about.

But the container didn’t just happen. Its adoption required huge sums of money, both from private investors and from ports that aspired to be on the leading edge of a new technology. It required years of high-stakes bargaining with two of the titans of organized labor, Harry Bridges and Teddy Gleason, as well as delicate negotiations on standards that made it possible for almost any container to travel on any truck or train or ship. Ultimately, it took McLean’s success in supplying U.S. forces in Vietnam to persuade the world of the container’s potential.

Drawing on previously neglected sources, economist Marc Levinson shows how the container transformed economic geography, devastating traditional ports such as New York and London and fueling the growth of previously obscure ones, such as Oakland. By making shipping so cheap that industry could locate factories far from its customers, the container paved the way for Asia to become the world’s workshop and brought consumers a previously unimaginable variety of low-cost products from around the globe.

Published in hardcover on the fiftieth anniversary of the first container voyage, this is the first comprehensive history of the shipping container. Now with a new chapter, The Box tells the dramatic story of how the drive and imagination of an iconoclastic entrepreneur turned containerization from an impractical idea into a phenomenon that transformed economic geography, slashed transportation costs, and made the boom in global trade possible.

Marc Levinson is an economist in Washington, DC. He was formerly a senior fellow at the Council on Foreign Relations, an economist at a leading investment bank, and finance and economics editor at The Economist. 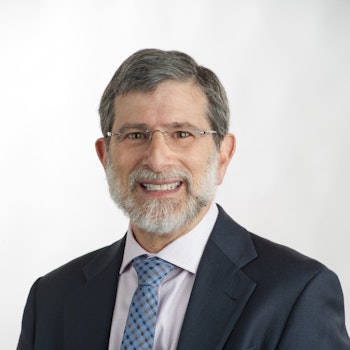 "One of the most significant, yet least noticed, economic developments of the last few decades [was] the transformation of international shipping. . . . The idea of containerization was simple: to move trailer-size loads of goods seamlessly among trucks, trains and ships, without breaking bulk. . . . Along the way, even the most foresighted people made mistakes and lost millions. . . . [A] classic tale of trial and error, and of creative destruction."—Virginia Postrel, The New York Times

"Marc Levinson's concern is business history on a grand scale. He tells a moral tale. There are villains ... and there is one larger than life hero: Malcom McLean. . . . Levinson has produced a fascinating exposition of the romance of the steel container. I'll never look at a truck in the same way again."—Howard Davies, The Times

"Like much of today's international cargo, Marc Levinson's The Box arrives 'just in time.'. . . It is a tribute to the box itself that far-off places matter so much to us now: It has eased trade, sped up delivery, lowered prices and widened the offering of goods everywhere. Not bad for something so simple and self-contained."—Tim W. Ferguson, The Wall Street Journal

"[A] smart, engaging book. . . . Mr. Levinson makes a persuasive case that the container has been woefully underappreciated. . . . [T]he story he tells is that of a classic disruptive technology: the world worked in one fashion before the container came onto the scene, and in a completely different fashion after it took hold."—Joe Nocera, The New York Times

"By artfully weaving together the nuts and bolts of what happened at which port with the grand sweep of economic history, Levinson has produced a marvelous read for anyone who cares about how the interconnected world economy came to be."—Neil Irwin, Washington Post

"Mr Levinson. . . . makes a strong case that it was McLean's thinking that led to modern-day containerisation. It altered the economics of shipping and with that the flow of world trade. Without the container, there would be no globalization."—The Economist

"A fascinating new book. . . . [I]t shows vividly how resistance to technological change caused shipping movements to migrate away from the Hudson river to other East Coast ports."—Management Today

"Marc Levinson's The Box . . . illustrates clearly how great risks are taken by entrepreneurs when entrenched interests and government regulators conspire against them. Even after these opponents are dispatched, technological and economic uncertainty plague the entrepreneur just as much as the vaunted 'first-mover advantage' blesses him, perhaps more. The story of the shipping container is the story of the opponents of innovation."—Chris Berg, Institute of Public Affairs Review

"International trade . . . owes its exponential growth to something utterly ordinary and overlooked, says author Marc Levinson: the metal shipping container.... The Box makes a strong argument. . . . Levinson . . . spins yarns of the men who fought to retain the old On the Waterfront ways and of those who made the box ubiquitous."—Michael Arndt, BusinessWeek

"[An] enlightening new history. . . . [The shipping container] was the real-world equivalent of the Internet revolution."—Justin Fox, Fortune

"Marc Levinson's The Box is . . . broad-ranging and . . . readable. It describes not just the amazing course of the container-ship phenomenon but the turmoil of human affairs in its wake."—Bob Simmons, The Seattle Times

"The Box is . . . an engrossing read. . . . The book is well-written, with detailed notes and an index. I found it absorbing and informative from the first page."—Graham Williams, Sydney Morning Herald

"This well-researched and highly readable book about the ubiquitous containers that carry so much of the world's freight will no doubt surprise most readers with its description of the immensity of the impact this simple rectangular steel box has had on global and regional economics, employment, labor relations, and the environment. . . . The Box makes for an excellent primer on innovation, risk taking, and strategic thinking. It's also a thoroughly good read."—Craig B. Grossgart, Taiwan Business Topics

"Here's another item we see every day that had a revolutionary effect. The shipping container didn't just rearrange the shipping industry, or make winners of some ports (Seattle and Tacoma among them). It changed the dynamics and economics of where goods are made and shipped to."—Bill Virgin, Seattle Post-Intelligencer

"An engrossing read. . . . The book is well written, with detailed notes and an index. I found it absorbing and informative from the first page."—Sydney Morning Herald

"For sheer originality . . . [this book] by Marc Levinson, is hard to beat. The Box explains how the modern era of globalization was made possible, not by politicians agreeing to cut trade tariffs and quotas, but by the humble shipping container."—David Smith, The Sunday Times

"Ingenious analysis of the phenomenon of containerism."—Stefan Stern, Financial Times

"This is a smoothly written history of the ocean shipping container. . . . Marc Levinson turns it into a fascinating economic history of the last 50 years that helps us to understand globalization and industrial growth in North America."—Harvey Schachter, Globe and Mail

"This is an ingenious analysis of containerization—a process that, Levinson argues, in fact made globalization possible."—Business Voice

"Using a blend of hard economic data and financial projections, combined with human interest, Levinson manages to provide insights into a revolution that changed transport forever and transformed world trade."—Leon Gettler, The Age

"There is much to like about Marc Levinson's recent book, The Box. . . . Levinson uses rich detail, a combination of archival and anecdotal data to build his story, and is constantly moving across levels of observation. . . . And the story of the box is a very good read."—Administrative Science Quarterly

"A lively and entertaining history of the shipping container. . . . The Box does a fine job of demonstrating how exciting the container industry is, and how much economists stand to lose by ignoring it."—William Sjostrom, EH.Net

"The Box is highly recommended for anyone with an interest in understanding the emergence of our contemporary 'globalized' world economy."—Pierre Desrochers, Independent Review

"[T]he insights the book provides make it a worthwhile read for anyone interested in how international trade in goods has evolved over the last 50 years."—Meredith A. Crowley, World Trade Review

"The Box reveals the subject to be interesting and powerful, shedding light on all kinds of issues, from the role of trade unions to the Vietnam War."—NUMAST Telegraph

"A perfect illustration of how an idiosyncratic entrepreneur brings something new into the world, and a wonderful example of how business history can be made to sing."—David Warsh, Economic Principals Blog

"An interesting read for port diplomats and industry professionals interested in contain­ers and their impact on global transport."—Ajay Deshmukh, Journal of Maritime Affairs

"The continuous decline of ocean shipping costs in the last 40 years is rarely credited for the growth of global trade in contemporary literature. Don't miss this amazing history."—George Stalk, Boston Consulting Group and author of Surviving the China Riptide

"This book is dynamite. The experts who tell you the transistor and microchips changed the world are off base. The ugly, unglamorous, little-noticed shipping container has changed the world. Without it, there would be no globalization, no Wal-Mart, maybe even no high-tech. And what looks like low-tech is in fact a breathtaking technological innovation. Marc Levinson's sparkling and authoritative story is great fun to read, but it is spectacular economic history as well."—Peter L. Bernstein, author of Against the Gods: The Remarkable Story of Risk

"Fascinating, informative, wonderfully historicized. This is a terrific untold story."—Nelson Lichtenstein, University of California, Santa Barbara, and editor of Wal-Mart: the Face of Twenty-First Century Capitalism

"The adoption of the modern shipping container may be a close second to the Internet in the way it has changed our lives. It has made products from every corner of the world commonplace and accessible everywhere. It has dramatically cut the cost of transportation and thereby made outsourcing a significant issue. It has transformed the world's port cities, and more. This book, very nicely written, makes a fascinating set of true stories of an apparently mundane subject, and dramatically illustrates how simple innovations can transform our lives."—William Baumol, Director, Berkley Center for Entrepreneurial Studies, author of The Free-Market Innovation Machine

"In the second half of the twentieth century, an innovation came along that would transform the way the world did business. . . . I'm not talking about software. I'm talking about the shipping industry, and in particular an innovation you might not have thought much about: the shipping container. It is the subject of an excellent book I read this summer called The Box. . . . The story of this transition is fascinating and reason enough to read the book. But in subtle ways The Box also challenges commonly held views about business and the role of innovation."—Bill Gates, Gatesnotes 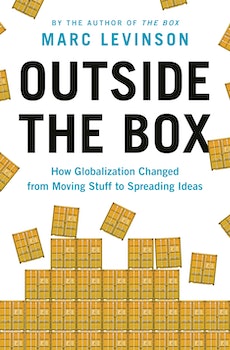