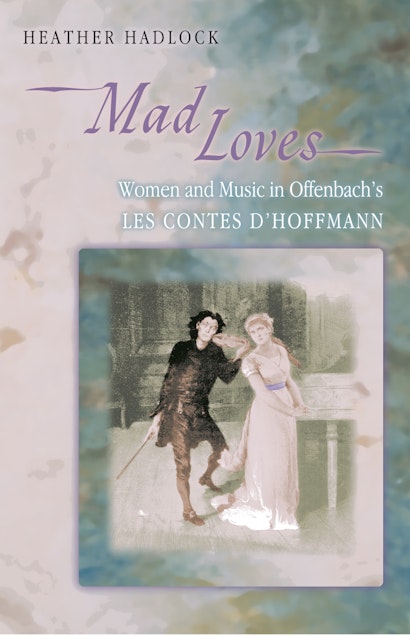 In a lively exploration of Jacques Offenbach’s final masterpiece, Heather Hadlock shows how Les Contes d’Hoffmann summed up not only the composer’s career but also a century of Romantic culture. A strange fusion of irony and profundity, frivolity and nightmare, the opera unfolds as a series of dreamlike episodes, peopled by such archetypes as the Poet, the Beautiful Dying Girl, the Automaton, the Courtesan, and the Mesmerist. Hadlock shows how these episodes comprise a collective unconscious. Her analyses touch on topics ranging from the self-reflexive style of the protagonist and the music, to parallels between nineteenth-century discourses of theater and medical science, to fascination with the hysterical female subject.

Les Contes d’Hoffmann is also examined as both a continuation and a retraction of tendencies in Offenbach’s earlier operettas and opéra-comiques. Hadlock investigates the political climate of the 1870s that influenced the composer’s vision and the reception of his last work. Drawing upon insights from feminist, literary, and cultural theory, she considers how the opera’s music and libretto took shape within a complex literary and theatrical tradition. Finally, Hadlock ponders the enigmas posed by the score of this unfinished opera, which has been completed many times and by many different hands since its composer’s death shortly before the premiere in 1881. In this book, the “mad loves” that drive Les Contes d’Hoffmann — a poet’s love, a daughter’s love, erotic love, and fatal attraction to music — become figures for the fascination exercised by opera itself.

Heather Hadlock is Assistant Professor of Musicology at Stanford University.

"While Hadlock's reading of Hoffman against its sources affords many keen insights, her reading of the opera against itself is even more revealing. . . . A work of scintillating intelligence and endlessly intriguing possibilities."—M. Lignana Rosenberg, Opera News

"In keeping with Offenbach's hybrid work, this book moves freely across academic borders—alongside the opera's literary origins sit historical and biographical contexts, and intertwined with straightforward musicology is feminist theory and philosophy. . . . If you love the opera, and are not frightened of some solid intellectual abstractions, here is something for your bookshelves."—Julia Hollander, Opera Now

"[An] attractive study of Offenbach's most enduring opera. . . . [L]overs of Offenbach's masterpiece will enjoy the ride . . . garnering insights into one of the most enjoyable and problematic operas in the central repertory."—Byron Nelson, Opera Quarterly

"Mad Loves offers us a prolonged meditation on Offenbach's final masterpiece, one in which we are often reminded, both elegantly and persuasively, of the diversity of cultural messages an opera can carry. This is one of the most impressive examples of operatic criticism to have appeared in the past decade, and a book that will definitely appeal to a broad range of opera enthusiasts."—Roger Parker, St. John's College, Cambridge

"Heather Hadlock has produced a charming book on one of the central operas of the standard repertory. Mad Loves engages with the pleasures afforded by Offenbach's Les Contes d'Hoffmann, that is, it does not ignore the basis for the piece's popularity in an attempt at salvaging it for the sake of formalist music theory. Yet it also interrogates key aspects of the opera in ways that open it up to serious cultural criticism. The book should attract, stimulate, and delight both scholars from across the humanities and the many opera enthusiasts who love to read about their favorite works."—Susan McClary, University of California, Los Angeles