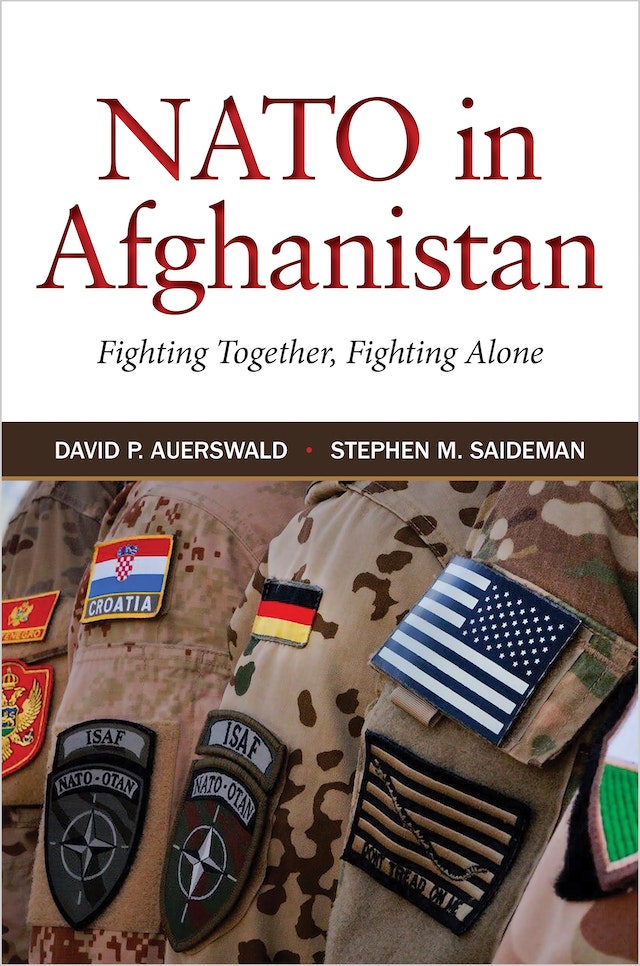 Modern warfare is almost always multilateral to one degree or another, requiring countries to cooperate as allies or coalition partners. Yet as the war in Afghanistan has made abundantly clear, multilateral cooperation is neither straightforward nor guaranteed. Countries differ significantly in what they are willing to do and how and where they are willing to do it. Some refuse to participate in dangerous or offensive missions. Others change tactical objectives with each new commander. Some countries defer to their commanders while others hold them to strict account.

NATO in Afghanistan explores how government structures and party politics in NATO countries shape how battles are waged in the field. Drawing on more than 250 interviews with senior officials from around the world, David Auerswald and Stephen Saideman find that domestic constraints in presidential and single-party parliamentary systems — in countries such as the United States and Britain respectively — differ from those in countries with coalition governments, such as Germany and the Netherlands. As a result, different countries craft different guidelines for their forces overseas, most notably in the form of military caveats, the often-controversial limits placed on deployed troops.


Providing critical insights into the realities of alliance and coalition warfare, NATO in Afghanistan also looks at non-NATO partners such as Australia, and assesses NATO’s performance in the 2011 Libyan campaign to show how these domestic political dynamics are by no means unique to Afghanistan.

David P. Auerswald is professor of security studies at the National War College. His books include Congress and the Politics of National Security. Stephen M. Saideman holds the Norman Paterson Chair in International Affairs at Carleton University. His books include For Kin or Country: Xenophobia, Nationalism, and War.

"The relationship between theoretical and empirical work contribution is certainly the great strength of this book, which demonstrates once again the importance of education in political science to the understanding of strategic phenomena. . . . [This] book deserves to become required reading for anyone interested in the conflict in Afghanistan the future of NATO."—Olivier Schmitt, War Studies Publications

"This book is very impressive, relying on some 250 interviews with key policy makers, including defense ministers, as well as senior military commanders. No other study provides such wide assessment of caveats. The authors provide in-depth case studies of the countries that provided he most troops to this operation. . . . The authors also devote an excellent chapter to NATO decision making procedures, which helps produce such different levels of political commitment to military operations, and results in contributing states fighting wars in their own unique ways."—Choice

"A brilliant, theoretically informed, and empirically rich analysis of coalition warfare in Afghanistan. Despite NATO's centralized structure intended to create unity of command, each country's military forces remain subordinate to national political leaders. Auerswald and Saideman demonstrate how national political institutions constrain leaders and, thus, how force is used or not within multilateral operations. Essential reading not only for policymakers but scholars of international organizations and modern warfare as well."—David A. Lake, University of California, San Diego

"NATO is arguably the most efficient military alliance in modern times, but there is nothing simple about managing the often widely divergent rules of engagement, chains of command, and politics of individual member states. Auerswald and Saideman have done an exhaustive examination of these challenges and how they have been met—or not met—in Afghanistan. Their book will be of extraordinary value to anyone seeking a better understanding of how coalitions operate."—Ryan Crocker, dean of the Bush School of Government and Public Service, Texas A&M University, and former U.S. ambassador to Afghanistan

"This book provides a superb look at all the challenges and opportunities faced in Afghanistan. Fair and balanced, it shows both the progress and the difficulties. A must-read for all who are following the important work of NATO and the International Security Assistance Force coalition."—Admiral James G. Stavridis, former Supreme Allied Commander Europe, NATO

"Success in Afghanistan is crucial to NATO's reputation as a global security organization, yet the mission has been considerably hindered by NATO partners, who often have different levels of commitment, interests at stake, and preferences over tactics. This original and compelling book explains why."—Theo Farrell, Department of War Studies, King's College London

"A significant contribution to our understanding of an important case of coalition warfare. Auerswald and Saideman provide an excellent account of NATO, how it works in operational settings, and the way in which the domestic politics of its various members and partners have complicated efforts at coordination in Afghanistan. The empirical material in this book is outstanding."—Deborah D. Avant, author of The Market for Force: The Consequences of Privatizing Security