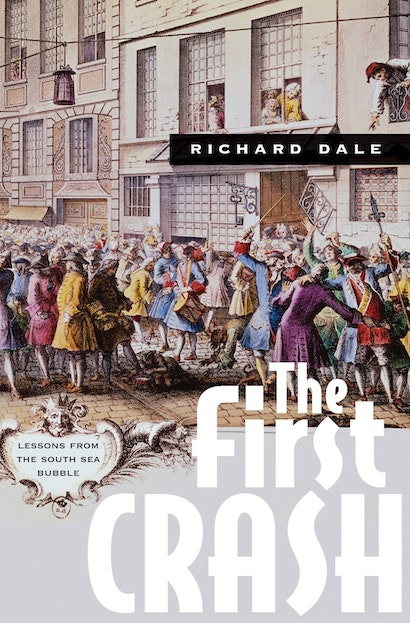 For nearly three centuries the spectacular rise and fall of the South Sea Company has gripped the public imagination as the most graphic warning to investors of the dangers of unbridled speculation. Yet history repeats itself and the same elemental forces that drove up the price of South Sea shares to dizzying heights in 1720 have in recent years produced the global crash of 1987, the Japanese stock market bubble of the 1980s/90s, and the international dot.com boom of the 1990s.

The First Crash throws light on the current debate about investor rationality by re-examining the story of the South Sea Bubble from the standpoint of investors and commentators during and preceding the fateful Bubble year. In absorbing prose, Richard Dale describes the trading techniques of London’s Exchange Alley (which included ‘modern’ transactions such as derivatives) and uses new data, as well as the hitherto neglected writings of a brilliant contemporary financial analyst, to show how investors lost their bearings during the Bubble period in much the same way as during the dot.com boom.


The events of 1720, as presented here, offer insights into the nature of financial markets that, being independent of place and time, deserve to be considered by today’s investors everywhere. This book is therefore aimed at all those with an interest in the behavior of stock markets.

"Richard Dale . . . picks a scholarly but readable path through the events that led to the collapse of shares in the infamous South Sea Company in 1720. Only the purblind could fail to draw some important parallels between the events of that year and the bubbles of the more recent past, not least the dot.com mania of five years ago."—Jonathan Davis, The Independent

"In this gripping tale of the South Sea scam, Richard Dale describes personal and corporate greed, creative accounting, and financial malpractice. He writes about events from three centuries ago, but his analysis is relevant to today's investors, traders, and policymakers."—Elroy Dimson, London Business School, author of Triumph of the Optimists

"This book represents an important piece of new scholarship focused almost exclusively on the South Sea Bubble. The author's tireless research yields a wonderful historical document that brings the reader into the center of financial markets in the early 1700s, and then reveals much about the South Sea Bubble that has previously gone undetected. Dale's work brings so much new evidence, and interweaves it with the old so skillfully, that The First Crash will certainly become a must read for scholars and is likely to be relied upon heavily in university classes as well. The author is to be congratulated."—Kevin Hassett, American Enterprise Institute, author of Bubbleology

"This extremely useful contribution to the field serves to remind nonhistorians, and particularly most financial economists, that almost all of what is thought of as modern financial analysis today was available 300 years ago."—Forrest Capie, City University Business School, London, author of Depression and Protectionism