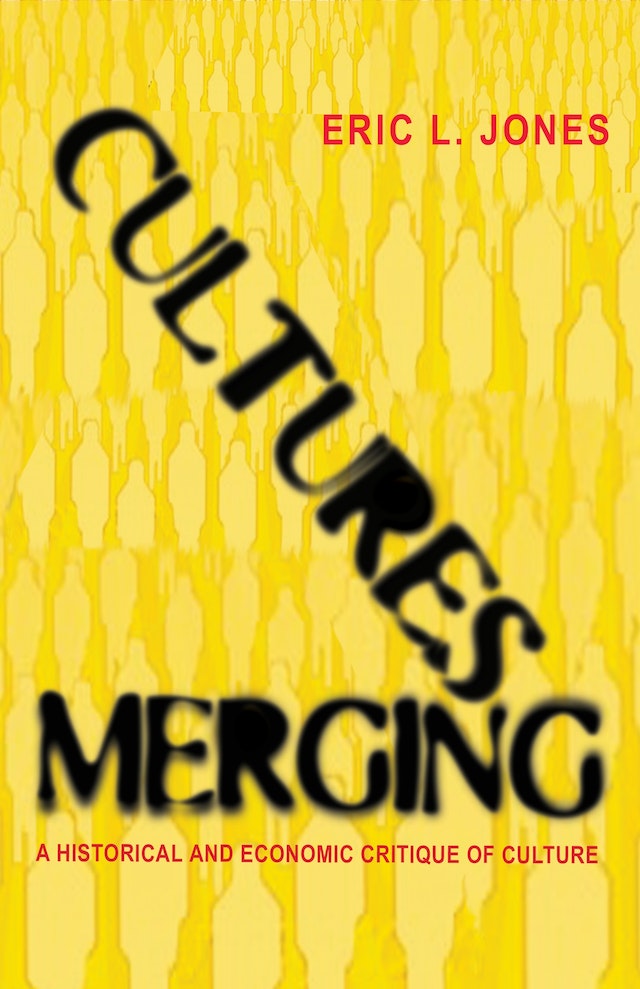 “Economists agree about many things — contrary to popular opinion — but the majority agree about culture only in the sense that they no longer give it much thought.” So begins the first chapter of Cultures Merging, in which Eric Jones — one of the world’s leading economic historians — takes an eloquent, pointed, and personal look at the question of whether culture determines economics or is instead determined by it.


Bringing immense learning and originality to the issue of cultural change over the long-term course of global economic history, Jones questions cultural explanations of much social behavior in Europe, East Asia, the United States, Australia, and the Middle East. He also examines contemporary globalization, arguing that while centuries of economic competition have resulted in the merging of cultures into fewer and larger units, these changes have led to exciting new syntheses.


Culture matters to economic outcomes, Jones argues, but cultures in turn never stop responding to market forces, even if some elements of culture stubbornly persist beyond the time when they can be explained by current economic pressures. In the longer run, however, cultures show a fluidity that will astonish some cultural determinists. Jones concludes that culture’s “ghostly transit through history” is much less powerful than noneconomists often claim, yet it has a greater influence than economists usually admit.


The product of a lifetime of reading and thinking on culture and economics, a work of history and an analysis of the contemporary world, Cultures Merging will be essential reading for anyone concerned about the interaction of cultures and markets around the world.

Eric L. Jones is Professorial Fellow at Melbourne Business School, University of Melbourne; Emeritus Professor at La Trobe University; and Visiting Professor at Exeter University. He is the author of The European Miracle and numerous other books and articles on economic history, economic development, international affairs, and environmental history.

"Jones's scholarship is enormous, and the book is full of fascinating facts. . . . He writes clearly with an absence of jargon, which makes the book accessible to a wide audience. Economists could certainly benefit from the way it opens up a wider set of perspectives. And . . . there is more than enough interesting material to make the book worthwhile for the more general reader."—Paul Ormerod, Times Higher Education Supplement

"Jones' book is important because it links our economic past and future with our ideas about culture."—Mark Trahant, Seattle Post-Intelligencer

"Eric Jones is intelligent, literate, and eclectic. His comments range over many fields besides economic history, and he writes in a sprightly manner. The book is fun to read, and it engages one of the big issues of economic history: the role of culture in economic affairs."—Peter Temin, Economic History Review

"Eric L. Jones has written an interesting and well-argued critique of two positions that he believes are well entrenched in the economic history literature. The first, which he terms 'cultural nullity', is widely held by economists and assigns no or at best a trivial role to culture in explaining economic outcomes. Second, Jones criticizes those (often historians) who think of a 'cultural fixity', in which an unchanging culture dominates every other aspect of life. . . . Jones marshals an impressive and at times amusing range of illustrations of the fluidity of cultures."—Harold James, International History Review

"Cultures Merging is a remarkable historical tour de force presenting a wealth of argument to indicate the role of economic forces in the modification of culture and vice versa."—Arthur Webb, Journal of Cultural Economics

"Jones . . . makes a compelling argument for the special place of literature in understanding these dialectics of poverty."—John Marsh, The Minnesota Review

"Jones writes in a vivid, attractive manner, expressing sometimes trenchant arguments on specific topics. . . . His book has a syncretic and eclectic feel, and conveys a sense of its author as someone who, having established his standing in his previous, more focused work, now revels in his ability to survey that of another generation or two of scholars, and to tell his readers which leads to follow and which to consider useless."—Gianfranco Poggi, Sociologica

"Eric Jones is one of the world's foremost economic historians and in this book he turns his attention to one of the most difficult puzzles of all: how much does culture matter for economic development? Culture often seems to be a constraint on what individuals and societies can do, yet in some circumstances cultures can change at remarkable speed. This book provides an erudite and thought-provoking guide for the culturally perplexed."—Paul Seabright, University of Toulouse

"One of the most fascinating and promising developments in thinking about the economy during recent years is the attempt to reintroduce the concept of culture into the analysis. This time around, however, an effort is made to use cultural explanation in such a way that it does not promise too much-but still delivers. Eric L. Jones's new book represents an excellent introduction to this debate. It also contains a wise as well as a suggestive solution for where to draw the line between using culture to explain everything and excluding it totally from the analysis."—Richard Swedberg, Cornell University

"A landmark treatment of economics and culture."—Tyler Cowen, author of Good and Plenty: The Creative Successes of American Arts Funding

"Jones, among the world's leading economic historians, marshals here a lifetime of scholarship to take on the enemies of globalization—especially the cultural relativists who defend as 'traditional' a life of ignorance and patriarchy, material poverty, and female circumcision. The book is beautifully and amusingly written, and Jones is wonderfully wide in his reference, ranging over anthropology, history, economics, social psychology, film, recent journalism, and the history of medieval China. He uses his personal experience, when relevant, which adds to the charm of the book. But the argument is grounded in economics and economic history: culture matters, Jones argues, but it is not eternal; in fact, it is quite changeable, and can be either an economic drag or enabler."—Deirdre McCloskey, University of Illinois, Chicago, author of The Rhetoric of Economics