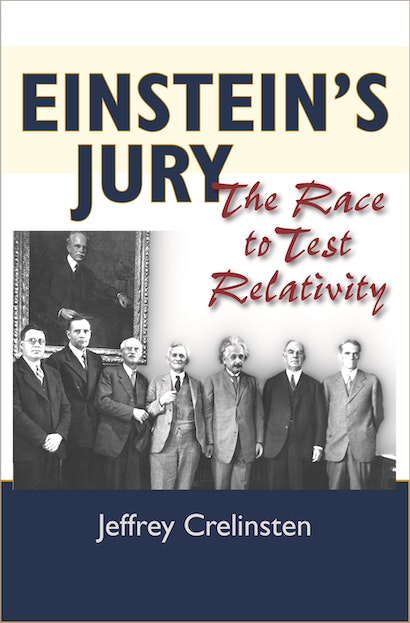 Einstein’s Jury is the dramatic story of how astronomers in Germany, England, and America competed to test Einstein’s developing theory of relativity. Weaving a rich narrative based on extensive archival research, Jeffrey Crelinsten shows how these early scientific debates shaped cultural attitudes we hold today.


The book examines Einstein’s theory of general relativity through the eyes of astronomers, many of whom were not convinced of the legitimacy of Einstein’s startling breakthrough. These were individuals with international reputations to uphold and benefactors and shareholders to please, yet few of them understood the new theory coming from the pen of Germany’s up-and-coming theoretical physicist, Albert Einstein. Some tried to test his theory early in its development but got no results. Others — through toil and hardship, great expense, and perseverance — concluded that it was wrong.


A tale of international competition and intrigue, Einstein’s Jury brims with detail gleaned from Crelinsten’s far-reaching inquiry into the history and development of relativity. Crelinsten concludes that the well-known British eclipse expedition of 1919 that made Einstein famous had less to do with the scientific acceptance of his theory than with his burgeoning public fame. It was not until the 1920s, when the center of gravity of astronomy and physics shifted from Europe to America, that the work of prestigious American observatories legitimized Einstein’s work. As Crelinsten so expertly shows, the glow that now surrounds the famous scientist had its beginnings in these early debates among professional scientists working in the glare of the public spotlight.

Jeffrey Crelinsten is an award-winning science writer and historian and president of The Impact Group, a private communications and research firm specializing in science and technology policy, communications, and education. He has written radio and film documentaries on Einstein and his theory of relativity for the Canadian Broadcasting Corporation (CBC), National Public Radio, and the National Film Board of Canada. His two-hour radio biography of Einstein, prepared for Einstein's 1979 centenary, was re-broadcast by the CBC in June, 2005. He lives in Toronto, Canada.

"In this impressively detailed yet readable scholarly work, Jeffrey Crelinsten examines the history of early attempts by astronomers to put Einstein's theory to the test. . . . As well as casting new light on a neglected aspect of relativity studies, Einstein's Jury provides a fascinating analysis of science in action: the scrupulous weighing of evidence to assay—as far as is humanly possible—the truth of the matter."—Peter D. Smith, Times Literary Supplement

"By focusing on astronomers rather than the theoretical physicists more often associated with Einstein, Jeffrey Crelinsten offers new insights. . . . He uses the introduction of the theory of relativity to present a case study of how innovative scientific ideas enter both the scientific community and the consciousness of the general public."—Publishers Weekly

"Jeffrey Crelinsten's fascinating Einstein's Jury: The Race to Test Relativity tracks the ways in which one particular community, astronomers, handled Einstein's relativity theories, roughly between 1910 and 1925. . . . Crelinsten has done a great service and deserves our thanks for tracking so beautifully the American astronomical response to relativity between the wars."—Peter Galison, Science

"Crisply written and impressively researched. . . . [T]wo elements make Einstein's Jury stand out: First, it looks at astronomers, rather than physicists or mathematicians, providing a focus that comparatively offer a genuinely novel perspective on the question of relativity's reception. . . . It belongs to that rare breed of works that will be of genuine interest and enjoyment to the casual reader while at the same time being required reading for the specialist."—Suman Seth, American Scientist

"Einstein's Jury tells a fascinating and largely unknown story of how Einstein's revolutionary ideas on the nature of space and time were received, understood, misunderstood, tested and finally confirmed by astronomers of the day, giving birth to relativistic cosmology."—Alan S.McRae, Mathematical Reviews

"Einstein's Jury is a story of true scientific effort and petty human weaknesses and eventualities. It is hard to put down this tale of how American astronomers, equipped with the best instruments in the world, struggled for or against the observational evidence for three experimental consequences of Einstein's theory of general relativity."—József Illy, Isis

"Einstein's Jury is an extremely well researched and readable account of how Einstein's innovative theories were received in the early decades of the twentieth century. The book follows the birth of modern astrophysics from the first trickles off Einstein's pen in 1905 to the emergence of relativistic cosmology in the mid-1930s. . . . Crelinsten's account of Relativity's twenty-year struggle for acceptance by the scientific community is told with all the tension of a well-paced thriller. I have no doubt that professional historians and popular science readers alike will thoroughly enjoy Einstein's Jury."—Gerard McMahon, Astronomy and Space

"Crelinsten charts an important but understudied episode in the history of modern physics: the empirical tests of general relativity. . . . Crelinsten is a believer in details. He diligently documents exchanges of ideas, conducts of experiments, and steps of arguments. He utilizes two kinds of sources. Regarding Einstein and other European physicists, Crelinsten relies on published documents and the secondary literatures. To delineate American astronomers' activities, he uses a lot of unpublished archival substances."—Chen-Pang Yeang, University of Toronto Quarterly

"Crelinsten is to be congratulated on having made a substantial contribution to our understanding of the reception of general relativity by American astronomers, and the central role they played in placing the theory's astronomical predictions beyond doubt."—Andrew Warwick, British Journal for the History of Science

"Crelinsten . . . is a good writer, who, without repeating himself, periodically sums up his discussion and sets things up for the next section so that we always know what to look forward to and are reminded of what we have just learned. . . . I strongly recommend this book to anyone interested in how revolutionary scientific ideas find acceptance within the scientific community."—Naomi Pasachoff, Metascience

"There is no shortage of literature on Einstein and relativity, yet Crelinsten succeeds in providing a novel and fruitful perspective on how Einstein's theory of general relativity was received in its early years. By focusing on the astronomers rather than the physicists, and America rather than Europe, he adds a valuable chapter to the history of modern science in which scientific and social aspects are treated equally and in the same compelling detail."—Helge Kragh, University of Aarhus, Denmark

"Jeffrey Crelinsten has written a wonderful book that fills an important gap in our knowledge of the reception and acceptance of general relativity in the scientific community: he focuses on the crucial role played by astronomers, particularly in the United States. In a fascinating account he describes how general relativity was tested and confirmed and how the new field of relativistic cosmology emerged out of this work. I wish this book had appeared earlier!"—A. J. Kox, University of Amsterdam

"An excellent book, with wonderful gems that arise out of the author's mastery of the literature. It will be enormously useful to Einstein scholars as well as to those interested in the history of astronomy."—Daniel Kennefick, University of Arkansas

"A fascinating and detailed story of the emergence of modern cosmology that reaches back to the debates over the validity of Einstein's theory of general relativity during the early decades of the twentieth century. This is an American tale of pragmatism and empiricism, of eclipse expeditions and of the intrepid spirit of those who built the world's largest astronomical observatories and discovered an expanding universe."—Diana Kormos Buchwald, Einstein Papers Project, Caltech

"Since the 1960s, scientists have shown with exquisite precision that Einstein was right about relativity. But for relativity's first two decades (1910-1930), the case for Einstein was hardly a slam dunk. Jeffrey Crelinsten tells the exciting roller-coaster story of the early experimental tests of special and general relativity, from light deflection measurements to ether-drift tests. Believers debated skeptics, but in the end, the jury was swayed by the data. Crelinsten's tale reads like a scientific courtroom thriller."—Clifford Will, Washington University in St. Louis, author of Was Einstein Right?

"An overwhelming accomplishment that surely will have a lasting impact on the history of the subject. So much is laid to rest about the dominance of the 'Eddington' 1919 eclipse result and its resulting PR as to be an eye-opener to many (to most) would-be-historians. [Crelinsten's] research into original sources is powerful and makes the case!"— Allan R. Sandage, Staff Astronomer Emeritus, The Observatories (Pasadena, CA) Carnegie Institution of Washington