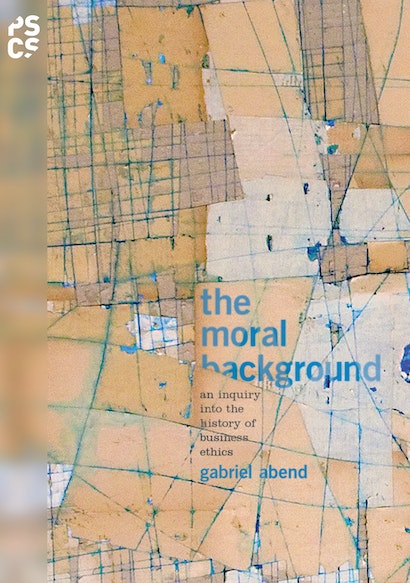 In recent years, many disciplines have become interested in the scientific study of morality. However, a conceptual framework for this work is still lacking. In The Moral Background, Gabriel Abend develops just such a framework and uses it to investigate the history of business ethics in the United States from the 1850s to the 1930s.

According to Abend, morality consists of three levels: moral and immoral behavior, or the behavioral level; moral understandings and norms, or the normative level; and the moral background, which includes what moral concepts exist in a society, what moral methods can be used, what reasons can be given, and what objects can be morally evaluated at all. This background underlies the behavioral and normative levels; it supports, facilitates, and enables them.

Through this perspective, Abend historically examines the work of numerous business ethicists and organizations—such as Protestant ministers, business associations, and business schools—and identifies two types of moral background. “Standards of Practice” is characterized by its scientific worldview, moral relativism, and emphasis on individuals’ actions and decisions. The “Christian Merchant” type is characterized by its Christian worldview, moral objectivism, and conception of a person’s life as a unity.

The Moral Background offers both an original account of the history of business ethics and a novel framework for understanding and investigating morality in general.

"The most incisive and theoretically sophisticated entry into the 'new sociology of morality' movement that has consolidated in recent years."—Omar Lizardo, Contemporary Sociology

"The Moral Background is an ambitious, deeply researched, and engaging book. . . . Abend's account is both thorough and broad, and the erudition he displays is astounding. . . . [A] masterful book."—Simone Polillo, Social Forces

"Abend combines history, philosophy, and social science to suggest a comprehensive base for understanding moral behavior. While the book's focus is on business ethics, the insights presented have many applications."—Choice

"[A] stimulating book, essential to understand the place of the business world . . . in the moral landscape of America today, but also . . . to grasp the contemporary trends in corporate social responsibility."—Michel Anteby, Sociologie du Travail

"This is an enormously ambitious book packed with history, ethics, and philosophy of science as well as sociology. It is more historical than much history of philosophy and takes business ethics more seriously than most ethicists do. It is an important contribution to creating a field in which researchers in a variety of traditions mutually inform each other about morality."—Dale Jamieson, European Journal of Sociology

"The Moral Background discerns and details moral patterns in the echo chamber where business protagonists talk, mostly to each other, about ethical motives, obligations, and opportunities. Abend has done a yeoman's job in excavating, analyzing, and systematizing the discursive surrounds of business ethics, pushing us all to think about who can and cannot be seen in the moral background."—Robin Wagner-Pacifici, European Journal of Sociology

"Especially important among the virtues of Abend's research is his ability to work through a huge body of historical material . . . and to find meaning in these disparate sources that point back to the 'moral backgrounds' from which they emanate. This is a truly gigantic task of intellectual integration, and Abend's book sets a high bar for future studies of the cultural meaning of intellectual, practical, and normative social realities."—Daniel Little, Understanding Society Blog

"The Moral Background is an intriguing and useful book. Abend develops and promotes an analytical concept that contemporary sociology desperately needs. I think it will be influential as cultural sociology continues to seek the right balance between culture as a repertoire of skills and styles and culture as something deeper—something that shapes the thoughts we think and provides the menu for the kinds of people we can aspire to be."—Stephen Vaisey, European Journal of Sociology

"This major, innovative study of what American businessmen were urged to do, be, and believe between the 1850s and 1930s reveals differing underlying assumptions that shaped how business was viewed, and how it viewed itself. It brings a new depth and subtlety to the emerging field of the sociology of morality."—Steven Lukes, author of Moral Relativism

"A successful treatment of the history of business ethics, this book provides what surely must be the most thorough account of the business ethics literature ever done. Coming at the material with a new, fully developed, and convincing theory, Abend analyzes business ethics from the perspective of the science of morality. A fine work."—Richard Swedberg, Cornell University

"With exceptional intellectual maturity, ambition, and vision, Abend skillfully deploys his analysis of moral background through an in-depth look at how business ethicists, businessmen, and journalists dealt with moral tensions, scandals, and failures. The result is a magisterial historical analysis that adds complexity to current approaches, particularly to the study of moral dilemmas. This book is sure to have a lasting impact on the study of morality in sociology and beyond."—Michèle Lamont, Harvard University

"Exploring large questions of morality, The Moral Background is a thoughtful, innovative, and absorbing account of business ethics, most specifically the history of business ethics and business ethicists in the United States between the 1850s to 1930s. With an authoritative voice and vigorous prose, Abend displays a talent for conveying complex ideas with lucidity and he illustrates sophisticated concepts with apt examples. A major contribution to the fields of cultural and economic sociology."—Viviana Zelizer, author of Economic Lives