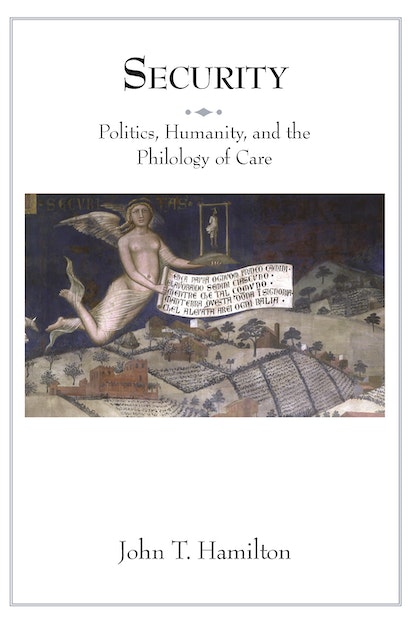 From national security and social security to homeland and cyber-security, “security” has become one of the most overused words in culture and politics today. Yet it also remains one of the most undefined. What exactly are we talking about when we talk about security? In this original and timely book, John Hamilton examines the discursive versatility and semantic vagueness of security both in current and historical usage. Adopting a philological approach, he explores the fundamental ambiguity of this word, which denotes the removal of “concern” or “care” and therefore implies a condition that is either carefree or careless. Spanning texts from ancient Greek poetry to Roman Stoicism, from Augustine and Luther to Machiavelli and Hobbes, from Kant and Nietzsche to Heidegger and Carl Schmitt, Hamilton analyzes formulations of security that involve both safety and negligence, confidence and complacency, certitude and ignorance. Does security instill more fear than it assuages? Is a security purchased with freedom or human rights morally viable? How do security projects inform our expectations, desires, and anxieties? And how does the will to security relate to human finitude? Although the book makes clear that security has always been a major preoccupation of humanity, it also suggests that contemporary panics about security and the related desire to achieve perfect safety carry their own very significant risks.

John T. Hamilton is professor of comparative literature at Harvard University. He is the author of Music, Madness, and the Unworking of Language and Soliciting Darkness: Pindar, Obscurity, and the Classical Tradition.

"[This] is a wonderfully rich volume that makes punctual yet decisive incursions leading to brilliant new readings of canonical texts. . . . Through the cornucopia of its corpus and the generosity of its gesture, Security is above all an invitation to think along, to think further and deeper, to pursue the project of the book on a yet wider corpus. It invites us to practice the philology of care in our approach to books but also to the world."—Hall Bjornstad, L'Esprit Créateur

"John Hamilton's meditation on 'security'—the word and the thing—ranges, with uncommon erudition, over centuries of thought, from Hyginus's Latin fable on Cura (a marvelous beginning) to Heidegger and Homeland Security. Hamilton's philological skill, intellectual historical imagination, and critical brio fuse in a radiant explication of Goethe's Faust; indeed, the trajectory of his thought is itself Faustian in its appetite and willpower."—Stanley Corngold, author of Franz Kafka: The Ghosts in the Machine

"Broad and deep, learned and incisive, Security traces crisscrossing arcs from Roman securitas, back to Greek asphaleia, up through renaissance allegorization and the major thinkers of the Western tradition until our own times. The paradox of security, a state of lacking care, sets up a double bind between being carefree and carelessness. Hamilton's philological method resists the degradation that comes with a governmental monopolization of security measures and proposes instead a flexible, more humane politics."—Michèle Lowrie, University of Chicago

"This is an important and absolutely timely exploration of security in all its intonations, structures, and puzzlements, from the classical world to the present. Hamilton moves with breathtaking ease between different languages, contexts, traditions, and periods, as well as different discourses, including literature, philosophy, anthropology, religion, political theory, painting, and film. Lucid, persuasive, and enlightening, this is a tour de force."—Paul Fleming, Cornell University

"Hamilton brings a vitally humanist and historicist perspective to the complex ideas, fears, risks, and desires that the word 'security' names. With brilliant close readings and fine insights, this is an excellent and refreshingly original study that will interest scholars and students in many fields."—Marc Redfield, Brown University