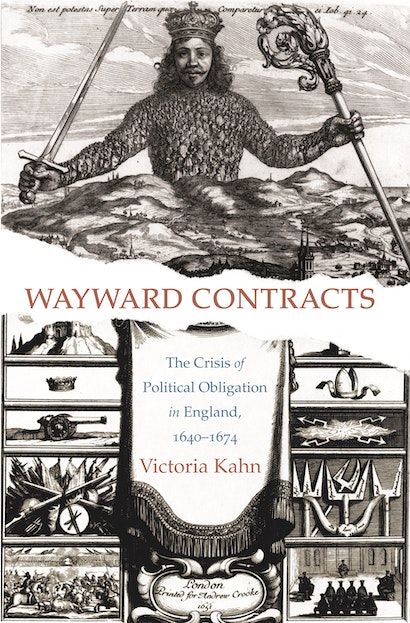 Why did the language of contract become the dominant metaphor for the relationship between subject and sovereign in mid-seventeenth-century England? In Wayward Contracts, Victoria Kahn takes issue with the usual explanation for the emergence of contract theory in terms of the origins of liberalism, with its notions of autonomy, liberty, and equality before the law.


Drawing on literature as well as political theory, state trials as well as religious debates, Kahn argues that the sudden prominence of contract theory was part of the linguistic turn of early modern culture, when government was imagined in terms of the poetic power to bring new artifacts into existence. But this new power also brought in its wake a tremendous anxiety about the contingency of obligation and the instability of the passions that induce individuals to consent to a sovereign power. In this wide-ranging analysis of the cultural significance of contract theory, the lover and the slave, the tyrant and the regicide, the fool and the liar emerge as some of the central, if wayward, protagonists of the new theory of political obligation. The result is must reading for students and scholars of early modern literature and early modern political theory, as well as historians of political thought and of liberalism.

Victoria Kahn is Professor of English and Bernie H. Williams Professor of Comparative Literature at the University of California, Berkeley. She is the author of Machiavellian Rhetoric (Princeton).

"This is an utterly remarkable book. Kahn is an immensely gifted historian of political theory—though that conventional pigeonhole threatens to obscure much of what is distinctive about her work. Here Kahn effortlessly breaks new ground and overturns longstanding orthodoxies. Whether she is flyspecking well-worn passages in Milton or exploring obscure works by Percy Herbert, Kahn is original and perceptive. She has illuminating things to say about the texts and about the big-picture theoretical stakes, and those two enterprises fit together very nicely indeed."—Don Herzog, University of Michigan, author of Poisoning the Minds of the Lower Orders