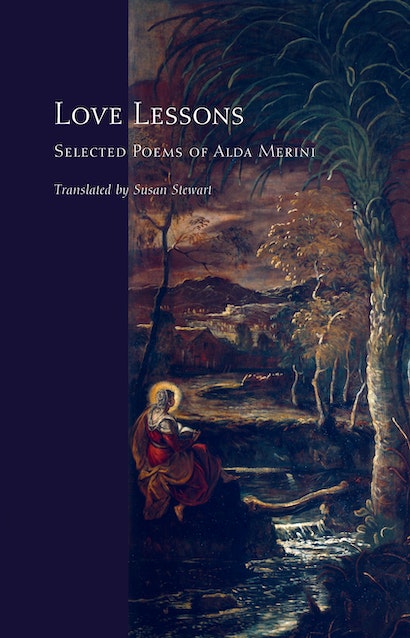 Alda Merini is one of Italy’s most important, and most beloved, living poets. She has won many of the major national literary prizes and has twice been nominated for the Nobel Prize — by the French Academy in 1996 and by Italian PEN in 2001. In Love Lessons, the distinguished American poet Susan Stewart brings us the largest and most comprehensive selection of Merini’s poetry to appear in English. Complete with the original Italian on facing pages, a critical introduction, and explanatory notes, this collection gathers lyrics, meditations, and aphorisms that span fifty years, from Merini’s first books of the 1950s to an unpublished poem from 2001. These accessible and moving poems reflect the experiences of a writer who, after beginning her career at the center of Italian Modernist circles when she was a teenager, went silent in her twenties, spending much of the next two decades in mental hospitals, only to reemerge in the 1970s to a full renewal of her gifts, an outpouring of new work, and great renown.

Whether she is working in the briefest, most incisive lyric mode or the complex time schemes of longer meditations, Merini’s deep knowledge of classical and Christian myth gives her work a universal, philosophical resonance, revealing what is at heart her tragic sense of life. At the same time, her ironic wit, delight in nature, and affection for her native Milan underlie even her most harrowing poems of suffering. In Stewart’s skillful translations readers will discover a true sibyl of the twentieth and twenty-first centuries.

Susan Stewart is the author of five books of poems, including Red Rover and Columbarium, which won the National Book Critics Circle Award. Her other books include Poetry and the Fate of the Senses, which won the Christian Gauss and Truman Capote prizes for literary criticism, and The Open Studio: Essays on Art and Aesthetics. A former MacArthur Fellow, she is the Annan Professor of English at Princeton and a chancellor of the Academy of American Poets.

"[T]hese lovely translations will enable American readers, many of whom will be encountering these poets for the first time, to see what all the fuss is about."—David Skeel, Books & Culture

"Every now and then, poetry is capable of hitting the mark—more simply, accurately and succinctly—than anything else in the world. It can touch, heel, inspire, enquire, and what's more, understand, during periods of extreme pain, peril and anguish; which, if we really, really think about it, is what accounts for poetry's inexorable validity. So when something great comes along, it certainly lightens the load and brightens the day. It's simply wonderful, and as such, ought to be embraced with both open arms and an open heart. Such is the case with Love Lessons, the selected poems of one of Italy's most beloved and important poets, Alda Merini."—David Marx, davidmarx.co.uk

"The line-by-line accuracy of Stewart's translations nearly makes of Love Lessons a primer for students of Italian."—Will Schutt, West Branch

"What we have in Love Lessons is a fantastic selection of poems by Alda Merini, one of Italy's foremost poets, translated into English by Susan Stewart, one of America's foremost poets. As millions of Italian readers already know—and English readers are about to discover for the first time—to open a book by Merini is to discover a poetry of immediate freshness, unlike any other."—Robert P. Harrison, Rosina Pierotti Professor in Italian Literature, Stanford University