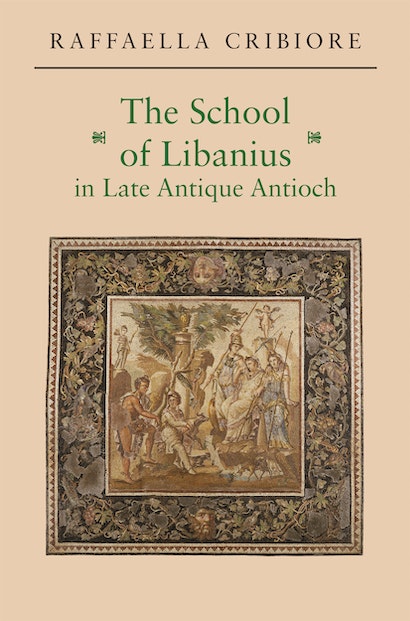 This book is a study of the fourth-century sophist Libanius, a major intellectual figure who ran one of the most prestigious schools of rhetoric in the later Roman Empire. He was a tenacious adherent of pagan religion and a friend of the emperor Julian, but also taught leaders of the early Christian church like St. John Chrysostom and St. Basil the Great. Raffaella Cribiore examines Libanius’s training and personality, showing him to be a vibrant educator, though somewhat gloomy and anxious by nature. She traces how he cultivated a wide network of friends and former pupils and courted powerful officials to recruit top students. Cribiore describes his school in Antioch — how students applied, how they were evaluated and trained, and how Libanius reported progress to their families. She details the professional opportunities that a thorough training in rhetoric opened up for young men of the day. Also included here are translations of 200 of Libanius’s most important letters on education, almost none of which have appeared in English before.


Cribiore casts into striking relief the importance of rhetoric in late antiquity and its influence not only on pagan intellectuals but also on prominent Christian figures. She gives a balanced view of Libanius and his circle against the far-flung panorama of the Greek East.

Raffaella Cribiore is Associate Curator for Papyri and Adjunct Professor of Classics at Columbia University. She is the coauthor of Women's Letters from Ancient Egypt, 300 BC-AD 800 and the author of Gymnastics of the Mind: Greek Education in Hellenistic and Roman Egypt (Princeton), which won the American Philological Association's 2004 award for the best book in classics.

"In addition to providing insights into Libanius's achievements in Antioch, the author provides translations of 200 letters (most never before translated into English) that reflect vividly the practice of education and the world of the fourth century in the east. An invaluable contribution to the study of ancient education, this volume includes everything from Libanius's early successes in Constantinople to the challenge of student retention."—J. de Luce, Choice

"Cribiore's new study of the school of Libanius offers a richly detailed view of the world of the late ancient classroom and the behind-the-scenes activities of one of its most famous teachers."—Craig A. Gibson, Classical World

"This . . . is a valuable—and extremely readable—contribution, which brings attention to underused and important evidence."—Gavin Kelly, Journal of Hellenic Studies

"This is a work of outstanding scholarship, a thorough and lively account which I would not only recommend to classicists and ancient historians but to anyone with a broad interest for the history of education. . . . Any review will do injustice to the book as a whole, which should be read and reread: undoubtedly the rich footnotes and bibliography will provide historians of childhood and youth with many new and unexpected facts."—Véronique Van Driessche, Les Etudes Classiques

"This book is a thorough and lively account of the school of rhetoric led by the sophist Libanius. Cribiore depicts this educational system in greater detail and with more attention to context than anyone before her. She manages to convey the excitement of words and speech. The surviving quantity of Libanius's written work is enormous. Few scholars of late antiquity have even attempted to master it as a whole. Cribiore has done this with a sharp historical eye and a fine sense of style. She breathes life into a corpus of texts that have traditionally induced ennui or neglect. This is a highly significant contribution to the field of late antique studies. The scholarship is impeccable. Cribiore has a deep knowledge of her voluminous author."—Glen Bowersock, Institute for Advanced Study

"This book will be welcomed wholeheartedly by classicists who work on ancient education and those whose interests touch late imperial culture and history. By careful reading of Libanius's vast correspondence, Cribiore pieces together the most complete picture we have of this tremendously important figure's educational activities in late antiquity. One might disagree with her, but she has done her homework, and her disputes with earlier points of view are both intelligent and clear. This is a study that has long been needed."—Stephen Trzaskoma, University of New Hampshire