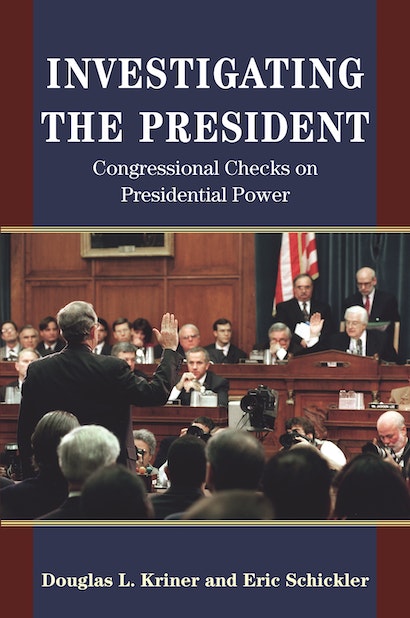 Douglas Kriner and Eric Schickler construct the most comprehensive overview of congressional investigative oversight to date, analyzing nearly thirteen thousand days of hearings, spanning more than a century, from 1898 through 2014. The authors examine the forces driving investigative power over time and across chambers, identify how hearings might influence the president’s strategic calculations through the erosion of the president’s public approval rating, and uncover the pathways through which investigations have shaped public policy. Put simply, by bringing significant political pressure to bear on the president, investigations often afford Congress a blunt, but effective check on presidential power—without the need to worry about veto threats or other hurdles such as Senate filibusters.

In an era of intense partisan polarization and institutional dysfunction, Investigating the President delves into the dynamics of congressional investigations and how Congress leverages this tool to counterbalance presidential power.

Douglas L. Kriner is associate professor of political science at Boston University. Eric Schickler is the Jeffrey and Ashley McDermott Professor of Political Science at the University of California, Berkeley.

"Kriner and Schickler have written an important and timely work that deepens our understanding of the relationship between Congress and the executive branch, and fills a gap in the scholarly literature. This state-of-the-art study demonstrates that Congress's power to investigate executive misconduct is not just a vehicle for political grandstanding but an effective check on presidential power."—Choice

"Overall, Investigating the President presents a novel theory of congressional investigations surrounding executive branch misconduct, convincingly finding support for its predictions using a variety of methodological approaches. In addition to its contribution to the separation of powers literature, it will undoubtedly become an invaluable model for future researchers and a staple in American politics classrooms."—Sharece Thrower, Public Administration

"Brightly illuminating how Congress's formidable powers of publicity constrain the president's choices, Kriner and Schickler map out the pathways by which congressional investigations affect presidents' public standing and policy leadership. Readers will be impressed by this book's causal analyses and its many clear, concise case examples."—Frances E. Lee, University of Maryland

"This book is the last word on congressional investigations of the presidency. With rich case studies extending back most of a century, Kriner and Schickler show beyond doubt that major probes have swerved U.S. politics and policymaking, particularly when the media world is paying attention."—David R. Mayhew, Yale University

"Making a major contribution to the literature on the relationship between Congress and the president, Investigating the President uses congressional investigations as a lens to explore important constitutional, political, and policy issues. An exemplary combination of historical data, experiments, case studies, and thoughtful analysis, this ambitious book stakes out new ground in innovative ways."—Linda L. Fowler, University of Michigan

"This impressive book's broad historical sweep yields a persuasive new treatment of the politics and implications of congressional investigations. Carefully argued and crafted, it rescues congressional investigatory activity from the dustbins of political grandstanding, and in doing so, offers a strong contribution to our understanding of the twentieth century and contemporary U.S. Congress."—Sarah Binder, George Washington University and Brookings Institution