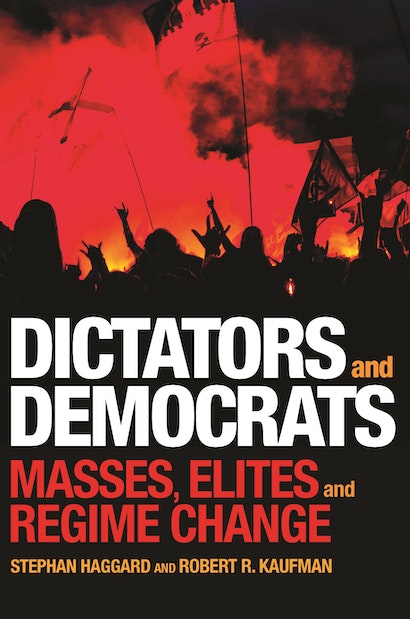 From the 1980s through the first decade of the twenty-first century, the spread of democracy across the developing and post-Communist worlds transformed the global political landscape. What drove these changes and what determined whether the emerging democracies would stabilize or revert to authoritarian rule? Dictators and Democrats takes a comprehensive look at the transitions to and from democracy in recent decades. Deploying both statistical and qualitative analysis, Stephen Haggard and Robert Kaufman engage with theories of democratic change and advocate approaches that emphasize political and institutional factors. While inequality has been a prominent explanation for democratic transitions, the authors argue that its role has been limited, and elites as well as masses can drive regime change.

Examining seventy-eight cases of democratic transition and twenty-five reversions since 1980, Haggard and Kaufman show how differences in authoritarian regimes and organizational capabilities shape popular protest and elite initiatives in transitions to democracy, and how institutional weaknesses cause some democracies to fail. The determinants of democracy lie in the strength of existing institutions and the public’s capacity to engage in collective action. There are multiple routes to democracy, but those growing out of mass mobilization may provide more checks on incumbents than those emerging from intra-elite bargains.

Moving beyond well-known beliefs regarding regime changes, Dictators and Democrats explores the conditions under which transitions to democracy are likely to arise.

"Haggard and Kaufman provide an erudite analysis of the complexities of transition from the authoritarian rule to democracy in the last three decades. . . . A first-rate contribution to the literature on regime transition."—Choice

"Dictators and Democrats will certainly take its place among the most significant, broad-scale studies of political change in the contemporary world. . . . The volume will be enthusiastically embraced by scholars already immersed in the literature of global data sets and familiar with the dialogue of controversies related to those methodologies."—Richard P. Farkas, Slavic Review

"In a crowded landscape Dictators and Democrats stands out. It sets a high standard for multimethod research with its deep involvement in the cases and statistical analyses of regime change. Notably, the book systematically examines the causal mechanisms at the heart of class theories."—Gary Goertz, University of Notre Dame

"Haggard and Kaufman have written another gem, one that is certain to become central to the study of regime change. Exploring transitions to and from democracy, they argue that influential theories of regime change focusing on modernization and inequality offer relatively little leverage compared to the importance of elite actors' interests, the nature of the ancien régime, and international factors."—David Samuels, University of Minnesota

"This book rigorously analyzes transition pathways for different types of democracies and the conditions under which each is likely. It recognizes that there is no unified path to democratic outcomes and makes significant contributions to the raging debates over the role of inequality and pressures from below for redistribution. With its global coverage and careful research, it is a tour de force."—Rachel Beatty Riedl, Northwestern University

"This is a seminal achievement by two master craftsmen. Substantively innovative, their book addresses the single most widely studied topic in the field of comparative politics. It is certain to be highly influential in shaping scholarly debates about democracy, authoritarianism, and regime change for many years to come."—Kenneth M. Roberts, Cornell University

"Dictators and Democrats challenges theories that focus on economic inequality and distributive conflict as the primary drivers of democratic transitions and breakdowns. Through a remarkable range of data, readers are left with the most detailed map of regime transitions during the 1980–2008 period that currently exists anywhere. The lesson that democracies arise and collapse through a diverse set of political processes and mechanisms shines brilliantly through."—Dan Slater, University of Chicago