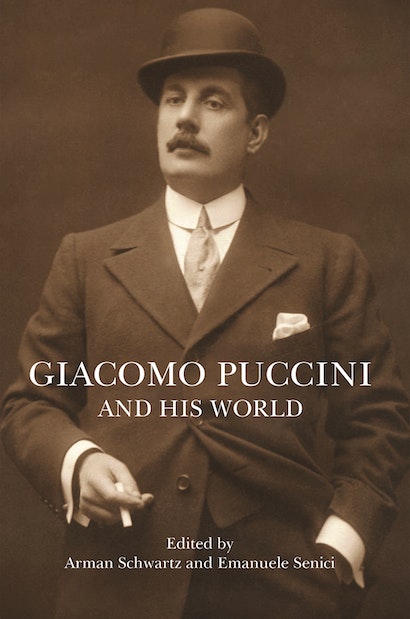 Giacomo Puccini (1858–1924) is the world’s most frequently performed operatic composer, yet he is only beginning to receive serious scholarly attention. In Giacomo Puccini and His World, an international roster of music specialists, several writing on Puccini for the first time, offers a variety of new critical perspectives on the composer and his works. Containing discussions of all of Puccini’s operas from Manon Lescaut (1893) to Turandot (1926), this volume aims to move beyond clichés of the composer as a Romantic epigone and to resituate him at the heart of early twentieth-century musical modernity.

This collection’s essays explore Puccini’s engagement with spoken theater and operetta, and with new technologies like photography and cinema. Other essays consider the philosophical problems raised by “realist” opera, discuss the composer’s place in a variety of cosmopolitan formations, and reevaluate Puccini’s orientalism and his complex interactions with the Italian fascist state. A rich array of primary source material, including previously unpublished letters and documents, provides vital information on Puccini’s interactions with singers, conductors, and stage directors, and on the early reception of the verismo movement. Excerpts from Fausto Torrefranca’s notorious Giacomo Puccini and International Opera, perhaps the most vicious diatribe ever directed against the composer, appear here in English for the first time.

"The collection is an amazing potpourri of Puccini scholarship."—Choice