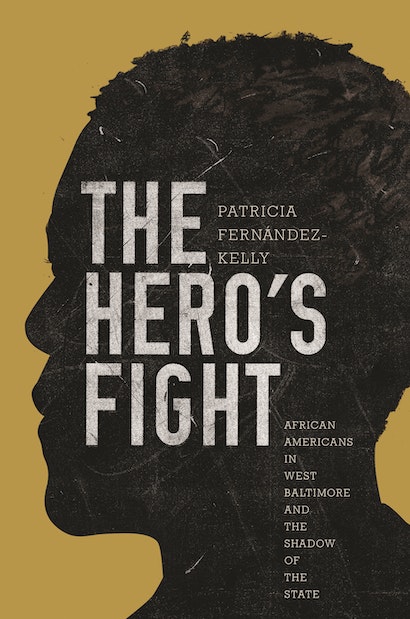 Baltimore was once a vibrant manufacturing town, but today, with factory closings and steady job loss since the 1970s, it is home to some of the most impoverished neighborhoods in America. The Hero’s Fight provides an intimate look at the effects of deindustrialization on the lives of Baltimore’s urban poor, and sheds critical light on the unintended consequences of welfare policy on our most vulnerable communities.

Drawing on her own uniquely immersive brand of fieldwork, conducted over the course of a decade in the neighborhoods of West Baltimore, Patricia Fernández-Kelly tells the stories of people like D. B. Wilson, Big Floyd, Towanda, and others whom the American welfare state treats with a mixture of contempt and pity—what Fernández-Kelly calls “ambivalent benevolence.” She shows how growing up poor in the richest nation in the world involves daily interactions with agents of the state, an experience that differs significantly from that of more affluent populations. While ordinary Americans are treated as citizens and consumers, deprived and racially segregated populations are seen as objects of surveillance, containment, and punishment. Fernández-Kelly provides new insights into such topics as globalization and its effects on industrial decline and employment, the changing meanings of masculinity and femininity among the poor, social and cultural capital in poor neighborhoods, and the unique roles played by religion and entrepreneurship in destitute communities.

Blending compelling portraits with in-depth scholarly analysis, The Hero’s Fight explores how the welfare state contributes to the perpetuation of urban poverty in America.

Patricia Fernández-Kelly is senior lecturer in sociology at Princeton University.

"[T]his thought-provoking book—and the comprehensive research behind it—could, if heeded, help alleviate some of society's most intractable problems."—Publishers Weekly

"[A] compelling and nuanced examination of the intersections of race, gender, and poverty. . . . The author makes a significant theoretical contribution to the poverty literature that moves beyond the bifurcated arguments of blaming the poor, or blaming the state for restricting opportunities to the poor."—Choice

"The Hero's Fight develops a historically informed and ethnographically robust sense of the troubled social, economic, and political waters urban black Americans face and navigate. Fernández-Kelly successfully illustrates how the potent combination of being black, American, and living in the urban places shapes the souls of black folk today. Well-written, rich in detail, and intersectional in its approach, The Hero’s Fight is a wonderful addition to sociology, political science, anthropology, African American studies, and urban studies classrooms, debates, and scholarship."—Marcus Anthony Hunter, Social Service Review

"Fernández-Kelly tells these life stories with novelistic flair. This is not ordinary ‘interview' data. It is hard won over years of direct immersion—watching people grow up, change jobs, give birth. The Hero's Fight is inflected with intimacy. It is also a book of wide-ranging commentary that masters an extraordinary range of literatures."—Harvey Molotch, author of Against Security: How We Go Wrong at Airports, Subways, and Other Sites of Ambiguous Danger

"The Hero's Fight examines the lives of a web of interconnected residents in inner-city Baltimore with a rare combination of care, concern, and critical reflection. This powerful and important book challenges us to reconsider the most basic tenets of how a welfare state should and could help the most vulnerable members of our society."—Harel Shapira, author of Waiting for José: The Minutemen's Pursuit of America