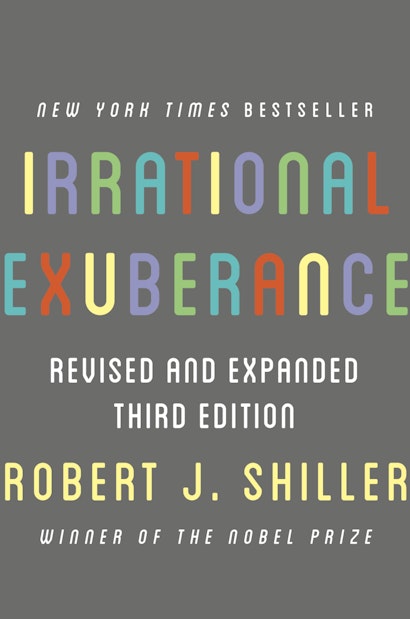 In this revised, updated, and expanded edition of his New York Times bestseller, Nobel Prize–winning economist Robert Shiller, who warned of both the tech and housing bubbles, cautions that signs of irrational exuberance among investors have only increased since the 2008–9 financial crisis. With high stock and bond prices and the rising cost of housing, the post-subprime boom may well turn out to be another illustration of Shiller’s influential argument that psychologically driven volatility is an inherent characteristic of all asset markets. In other words, Irrational Exuberance is as relevant as ever. Previous editions covered the stock and housing markets—and famously predicted their crashes. This edition expands its coverage to include the bond market, so that the book now addresses all of the major investment markets. It also includes updated data throughout, as well as Shiller’s 2013 Nobel Prize lecture, which places the book in broader context. In addition to diagnosing the causes of asset bubbles, Irrational Exuberance recommends urgent policy changes to lessen their likelihood and severity—and suggests ways that individuals can decrease their risk before the next bubble bursts. No one whose future depends on a retirement account, a house, or other investments can afford not to read this book.

Robert J. Shiller, the recipient of the 2013 Nobel Prize in economics, is a bestselling author, a regular contributor to the Economic View column of the New York Times, and a professor of economics at Yale University. For more information, please go to www.irrationalexuberance.com.

"Robert J. Shiller . . . has done more than any other economist of his generation to document the less rational aspects of financial markets."—Paul Krugman, New York Times

"Irrational Exuberance is not just a prophecy of doom. . . . [I]t is a serious attempt to explain how speculative bubbles come about and how they sustain themselves."—John Cassidy, New Yorker

"What set off this speculation and what feeds it? Shiller ranges widely his explanations, laying them out in the first 168 pages in easy-to-read, sometimes passionate prose. . . . [T]hose first 168 pages are must reading for anyone with savings invested in stocks."—Louis Uchitelle, New York Times Book Review

"Mr. Shiller's book offers a dose of realism. . . . [I]t presents a message investors would be wise to head: Make sure your portfolio is adequately diversified. Save more and don't count on double-digit gains of the past decades continuing to bail you out during retirement."—Burton G. Malkiel, Wall Street Journal

"Although its message may be unwelcome to many, this important book should be read by anyone interested in economics or the stock markets."—Rene M. Stulz, Science

"Dazzling, richly textured, provocative . . By far the most important book about the stock market since Jeremy J. Siegel's Stocks for the Long Run."—William Wolman, Business Week

"Shiller has provided an accessible guide to the usually impenetrable literature on financial markets, especially the American stock market."—Foreign Affairs

"Shiller contends that investor psychology is so given to herd behavior that it's almost impossible to manipulate or even influence. The market can 'go through significant mispricing lasting years or even decades.'"—Robert J. Samuelson, Washington Post

"Irrational Exuberance should be compulsory reading for anybody interested in Wall Street or financially exposed to it; at the moment, that would be roughly everybody in the United States."—Economist

"[An] excellent new book. . . . If you want to preserve capital, unload most of your stocks and invest in government bonds."—Steve H. Hanke, Forbes

"Likely to be the year's most-talked-about finance book. . . . You can agree or disagree with it. But you owe it to yourself to read it if you are investing in equities or contemplating doing so."—Fred Barbash, International Herald Tribune

"Irrational Exuberance is likely to cause a stir. . . . Shiller illustrates how the current market is like a naturally occurring Ponzi scheme in which investors become promoters for the game after receiving initial payments with money taken from subsequent investors."—David Henry, USA Today

"Irrational Exuberance is not billed as a personal finance book. But it is. You can agree or disagree with it. But you owe it to yourself to read it if you're investing, or contemplating investing, in inequities."—The Washington Post

"So why have share prices soared so high in the past five years, taking market valuations past all historical records? Professor Shiller's answer, as the title indicates, is not encouraging. His message is: diversify now as much as you can, and batten down the hatches."—Diane Coyle, Independent

"The point of Irrational Exuberance is not to help investors dump their houses before the current exuberance fades. It is to deepen our understanding of the events we are watching as one bubble gives birth to another and to encourage readers to think about economic behavior and economic policies that can cushion the nasty side of volatility."—Sharon Reier, The International Herald Tribune

"The first edition of this book was widely read because of its timing. This one, too, seems perfectly timed, coming when we're starting to fear we've been fooling ourselves. Again. . . . There's a world of important information for everyone."—Lyn Miller, USA Today

"The second edition's new component . . . is Shiller's exploration of how market psychology has responded to the ensuing five years of retrenchment. One chilling conclusion he reaches from his knowledge of past market performance is that the 2005 market may still be correcting and that a return to 2000 levels may be a decade away. He further warns that many investors are still too heavily invested in equities and that proposals to invest Social Security funds in the stock market would subject the retirement system to unacceptable risk. Shiller expands his focus to include the booming real estate market where he sees another speculative bubble building."—Library Journal

"There's plenty of new material in this edition. . . . Chief among the new additions is Shiller's deeper focus on recent excesses in the stock market and his skepticism about investing in real estate. . . . . Shiller's ideas have so many devoted followers that I wouldn't be surprised to see many more editions."—Angele McQuade, BetterInvesting

"Yale University Professor Robert Shiller pretty much called the stock market drop when this book was first published in 2000. In this fact-packed book, Shiller describes the psychological origins of volatility, among other things. And in the newest edition, Shiller compares the recent housing boom to the stock market bubble of the 1990s."—Registered Rep.

"[Shiller] fully updates his argument here, adding new material (a chapter on the bond market, his 2013 Nobel lecture) and augmenting the text to reflect developments since the 2005 second edition. He vacuums up all manner of cultural phenomena, from the important (rising income inequality) to the possibly significant (Google Glass) to the trivial (Kim Kardashian), to reinforce his thesis, and he writes expressively, whether explaining arcane economic issues or illustrating how the story behind Mona Lisa's smile helps account for the painting's astonishing market value. A rare example of economic analysis, deeply respected within the discipline, wholly accessible to general readers."—Kirkus

"A superb, well-written, well-argued contribution for serious scholars and practitioners, whether they agree with Shiller or not."—Choice

"Shiller provides an excellent synthesis of all the evidence contradicting the efficient market hypothesis, especially how a form of irrational exuberance sometimes leads to price bubbles. . . . Without any doubt, Irrational Exuberance must be read by anyone interested in finance. And it really can be read by anyone interested in finance because the genius of this book is to explain complex phenomena easily, avoiding specialist jargon, including mathematics."—David Le Bris, Journal of Economics