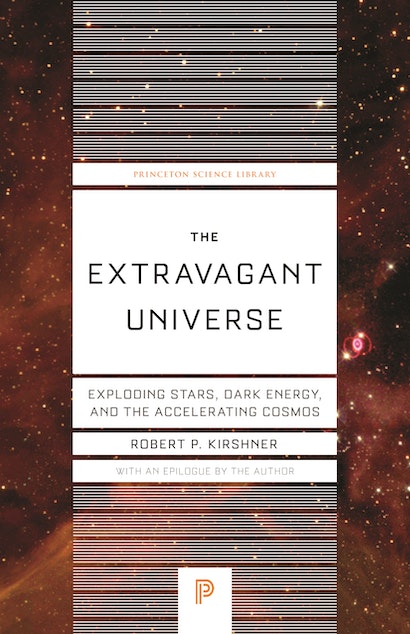 The Extravagant Universe tells the story of a remarkable adventure of scientific discovery. One of the world’s leading astronomers, Robert Kirshner, takes readers inside a lively research team on the quest that led them to an extraordinary cosmological discovery: the expansion of the universe is accelerating under the influence of a dark energy that makes space itself expand. In addition to sharing the story of this exciting discovery, Kirshner also brings the science up-to-date in a new epilogue. He explains how the idea of an accelerating universe — once a daring interpretation of sketchy data — is now the standard assumption in cosmology today.


This measurement of dark energy — a quality of space itself that causes cosmic acceleration — points to a gaping hole in our understanding of fundamental physics. In 1917, Einstein proposed the “cosmological constant” to explain a static universe. When observations proved that the universe was expanding, he cast this early form of dark energy aside. But recent observations described first-hand in this book show that the cosmological constant — or something just like it — dominates the universe’s mass and energy budget and determines its fate and shape.


Warned by Einstein’s blunder, and contradicted by the initial results of a competing research team, Kirshner and his colleagues were reluctant to accept their own result. But, convinced by evidence built on their hard-earned understanding of exploding stars, they announced their conclusion that the universe is accelerating in February 1998. Other lines of inquiry and parallel supernova research now support a new synthesis of a cosmos dominated by dark energy but also containing several forms of dark matter. We live in an extravagant universe with a surprising number of essential ingredients: the real universe we measure is not the simplest one we could imagine.

Robert P. Kirshner is the Clowes Professor of Science at Harvard University.

"Kirshner is a talented writer, and both experts and general readers will find his book a consistently enjoyable read. . . . The Extravagant Universe is a personal book. . . . For the general reader interested in the excitement of how science is done, this strategy makes for a fascinating account. . . . The story . . . is irresistible in its own right, and is related with verve and good humor. . . . Books like this one will help inspire the next generation of physicists."—Sean Carroll, Nature

"An extravagant and thoroughly enjoyable account of our amazing universe."—Michael S. Turner, Science

"Robert Kirshner has written an excellent insider's account of the race to discover the fate of the cosmos. . . . Kirshner shows an impressively deft touch with complex explanations, and he doesn't hesitate to bridge gaps in the reader's knowledge with an apt metaphor. . . . The Extravagant Universe delivers the promise of its subtitle extremely well, and should serve as the definitive insider's story of how Kirshner led his motley group of astronomers to glory in their search to find the fate of the universe."—Donald Goldsmith, Natural History

"Fellow astronomers—and generations of Harvard undergraduates—have long appreciated [Kirshner] as a raconteur of exceptional eloquence, so it is hard to imagine anyone better suited to give us the inside story on the new discoveries. [He] does not disappoint. He tells, in large part, a story of how improved technology has enabled astronomers to look farther into the distance and thus further into the past."—Laurence Marschall, Discover Magazine

"The Extravagant Universe is hugely enjoyable. . . . It's wonderful . . . an entertaining and witty account of one of the biggest scientific stories of the past 10 years: how exploding supernovae show that the expansion of the Universe is accelerating. . .. Do buy this delightful book."—Michael Rowan-Robinson, New Scientist

"More than one book already exists about this momentous discovery, but this new entry, The Extravagant Universe, by Robert Kirshner, is probably the best one to read. . . . This is an insider's account of how the work was done. Besides giving an up-to-the-minute account of the science, Mr. Kirshner lets us share vicariously in the thrill of discovery."—The Economist

"The Extravagant Universe isn't the only accessible book about dark energy and cosmic acceleration on the market. However, it provides a unique behind-the-scenes feeling for the heady days leading up to the discovery. I found it ever harder to put down as I drew closer to the crucial moment when Kirshner and his colleagues found themselves staring the cosmological constant in the face."—Joshua Roth, Sky & Telescope

"Talented researcher Kirshner clearly describes the scientific detective work responsible for current ideas about the history of the universe. . . . Kirshner has been at the forefront of these developments. . . . He brings everything together using simple, effective, and often humorous analogies and anecdotes to explain how research teams interact as they built the chronology of how the universe developed and evolved to where it is today."—Choice

"The gripping story of how two competing groups of scientists came to make, and finally believe, the surprising measurements on which a radical new view of the universe depends. . . . It is an evocative reminder that cosmology, too, is now a true observational, experimental science, securely grounded in the messy practical realities of making measurements."—Michael Riordan, The New York Times Book Review

"An insider's scoop on what is arguably the hottest astronomy story of our time. Kirshner has written a book that is not only history of modern cosmology, but also a case study in the scientific process. . . . Kirshner uses wonderfully simple and sometimes amusing analogies to explain complicated concepts."—Jennifer Birriel, Mercury

"A wonderfully informative and engaging book on one of the most exciting developments in modern cosmology."—Alex Filippenko, Astronomy

"A readable, entertaining, and informative account of an ancient and familiar—yet newly reinvigorated—branch of science."—James Case, SIAM News

"I loved this book. Kirschner writes with passion, humanity and generosity."—Margaret Dobbins, The Daily Telegraph

"Kirshner's book represents a high point in popular science publishing. It works at several levels, especially the personal, in which he offers a well-written, even classic, account of the life of a working scientist.... The Extravagant Universe is a book that will be read for pleasure. . . . Kirshner has a real gift for visualizing the shape and structure of the universe."—Martin Ince, Times Higher Education Supplement

"The first eight chapters provide an introduction to cosmology at the level of Astronomy 101. . . . That tale is often told, but seldom so engagingly. The analogies are apt, the anecdotes are amusing, and the writing is brisk and witty—in places downright funny. . . . Kirshner succeeds in conveying the difficulty and excitement of the hunt for remote supernovae."—David Branch, Physics Today

'"This book describes a remarkable era in cosmology. Over the last three years several lines of evidence have gelled into a consistent but—to most of us—unexpected picture of what our universe consists of and how it is expanding. Told by a key participant, the story will be enjoyed by anyone with an interest in astronomy or cosmology, or even merely a general curiosity about science."—Martin Rees, author of Our Cosmic Habitat

"This is a wonderful book on one of the hottest topics in science, written by one of the main contributors to the breakthrough. It presents a history of modern cosmology written in a very lively style with amusing personal stories that make the reading easy and entertaining."—Bohdan Paczynski, Princeton University