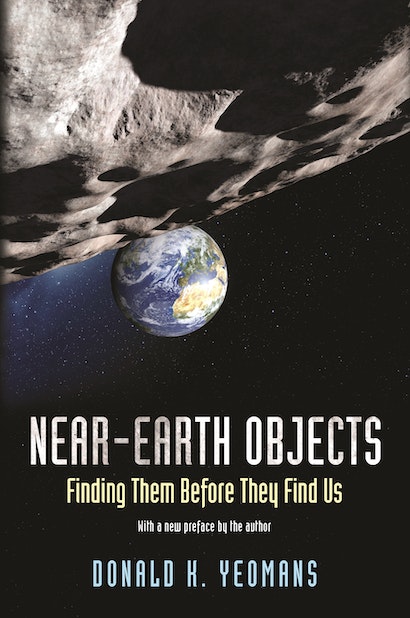 Of all the natural disasters that could befall us, only an Earth impact by a large comet or asteroid has the potential to end civilization in a single blow. Yet these near-Earth objects also offer tantalizing clues to our solar system’s origins, and someday could even serve as stepping-stones for space exploration. In this book, Donald Yeomans introduces readers to the science of near-Earth objects—its history, applications, and ongoing quest to find near-Earth objects before they find us.

In its course around the sun, the Earth passes through a veritable shooting gallery of millions of nearby comets and asteroids. One such asteroid is thought to have plunged into our planet sixty-five million years ago, triggering a global catastrophe that killed off the dinosaurs. Yeomans provides an up-to-date and accessible guide for understanding the threats posed by near-Earth objects, and also explains how early collisions with them delivered the ingredients that made life on Earth possible. He shows how later impacts spurred evolution, allowing only the most adaptable species to thrive—in fact, we humans may owe our very existence to objects that struck our planet.

Yeomans takes readers behind the scenes of today’s efforts to find, track, and study near-Earth objects. He shows how the same comets and asteroids most likely to collide with us could also be mined for precious natural resources like water and oxygen, and used as watering holes and fueling stations for expeditions to Mars and the outermost reaches of our solar system.

Donald K. Yeomans is a Fellow and Senior Research Scientist at the Jet Propulsion Laboratory, and a recipient of NASA's highest award, the Distinguished Service Medal.

"Balancing the wonders of astronomy with the looming potential for an epic, planet-wide disaster, Yeomans, a fellow and research scientist at NASA's Jet Propulsion Laboratory, explores the origins of near-Earth objects—asteroids, comets, meteors, and meteoroids—and the threat they can pose to our planet. . . . Yeomans's book is an accessible and far-ranging primer on the science of near-Earth objects."—Publishers Weekly

"As Earth creaks on its course around the Sun, it is exposed to a relentless barrage of asteroids and comets. Donald Yeomans, who manages NASA's Near-Earth Object Program Office, offers an introduction to the science of these lethal monsters, one of which may have seen off the dinosaurs 65 million years ago and created the Chicxulub crater. Yeomans shows how the threats are balanced by potential boons, such as the theoretical delivery of the building blocks of life on Earth. Can these reeling masses even become interplanetary pitstops on the road to Mars?"—Nature

"[Near Earth Objects] gives readers an inside account of the latest efforts to find, track and study life-threatening asteroids and comets."—ScientificAmerican.com's, Observations

"Near-Earth Objects is a fascinating tour guide of the asteroids we should worry about."—Marcus Chown, New Scientist

"Despite its title, Near-Earth Objects offers a concise and informative overview of the formation of the entire solar system: why the planets differ, the latest theories on how they lined up and the origin of such leftovers as comets and asteroids. Yeomans also makes a good case that a near-Earth asteroid is an accessible target for our next space adventure, readying us for Mars and preparing us for a time when we might depend on them as a source of rare minerals."—Marcia Bartusiak, Washington Post

"[C]ompact and readable. . . . [Near-Earth Objects's] main goal is to invite readers to share a topic that is fascinating beyond its practical importance."—Fred Bortz, Dallas Morning News

"[Yeomans's] book offers an excellent introduction to the layperson on near-Earth asteroids (NEAs), those objects that can potentially pass within about 29 million miles of Earth as they orbit around the sun. . . . I highly recommend the book. Since it covers so many aspects of these fascinating asteroids, I found it comprehensive and a great read. While Yeomans covers a topic that some of us worry about, he provides the facts needed to stay cool yet informed."—Astro Bob blog

"Yeomans makes it seem like we're uncomfortably close to an asteroid-induced apocalypse. Luckily, he has a sense of humor about it, and he has some sensible scientific solutions."—Sarah Rothbard, Slate.com

"This is a superb book that brings the reader up-to-speed on those menacing denizens of the deep—Near Earth Objects, or NEOs for short. Moreover, this book is good bedtime reading for those that stay awake at night awaiting celestial calamity."—Leonard David, Coalition for Space Exploration

"The book has an impressive from-the-horse's-mouth authority, yet it also has a pleasing, storytelling style, wry humour and some fun facts."—Hazel Muir, BBC Sky at Night

"Sixty-five million years ago, a 10-km-wide asteroid slammed into Earth, killing off the dinosaurs. While that's the best-known Earth-asteroid collision, the truth is, space debris rains down on us all the time, notes Yeomans, manager of NASA's Near-Earth Object Program Office. He and other scientists are on a mission to track the largest asteroids that swarm around our planet, and his book is a behind-the-scenes look at how they do it—hopefully finding them before they find us."—Maclean's Bookmarked

"Unlike many books involving space exploration I didn't get the feeling of fantasy, wishful thinking or sabre rattling. Yeomans just gives us good, reasoned arguments, presented in the main in a likeable, friendly fashion. . . . [I]f you are interested in astronomy, the solar system or the survival of the human race, this is a book that should spark your interest."—Brian Clegg, Popular Science

"This is a wonderful and timely book, not to mention a great read! Asteroids are indeed wondrous objects, and it is simply a matter of time before we find one with our address on it. Yeomans' unparalleled expertise, storytelling skills, and wry sense of humor are a savory delight. Enjoy!"—Rusty Schweickart, Apollo 9 astronaut

"The nearby asteroids are Earth's closest neighbors and key stepping stones for our expansion into space. Yet these rogue space rocks can also threaten our planet. Noted scientist Donald Yeomans is one of NASA's 'men in black,' keeping an eye out for wayward asteroids. He clearly explains what we know about these celestial denizens—and what discoveries will help us avoid a cosmic catastrophe."—Tom Jones, veteran astronaut, author of Sky Walking

"Many people consider near-Earth objects to be important only because they pose a threat to Earth, but there are many other reasons for studying them. This book explains why. I know of no better introduction to the subject."—Michael F. A'Hearn, University of Maryland

"This is an excellent and interesting book. I found it enjoyable and informative, and I strongly recommend it to anyone seeking a better understanding of near-Earth objects and the solar system in general."—Daniel J. Scheeres, University of Colorado at Boulder

"This is a fine book. Yeomans treats all the important aspects of his topic, including finding near-Earth objects and calculating their orbits, the broader issues of solar system origins and early evolution, the threat of impacts by near-Earth objects of various sizes, and approaches to preventing impacts from occurring. The scholarship is at a high level."—Clark R. Chapman, Southwest Research Institute