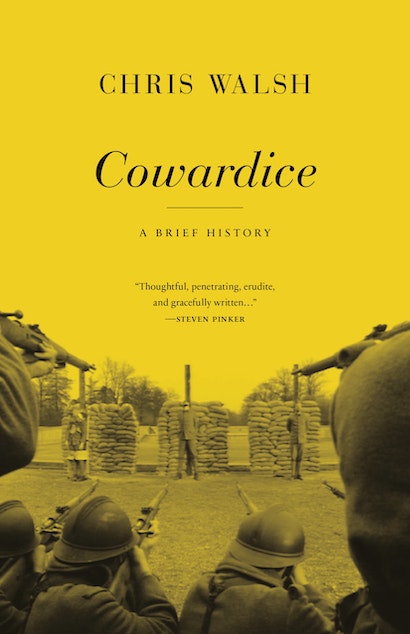 Coward. It’s a grave insult, likely to provoke anger, shame, even violence. But what exactly is cowardice? When terrorists are called cowards, does it mean the same as when the term is applied to soldiers? And what, if anything, does cowardice have to do with the rest of us? Bringing together sources from court-martial cases to literary and film classics such as Dante’s Inferno, The Red Badge of Courage, and The Thin Red Line, Cowardice recounts the great harm that both cowards and the fear of seeming cowardly have done, and traces the idea of cowardice’s power to its evolutionary roots. But Chris Walsh also shows that this power has faded, most dramatically on the battlefield. Misconduct that earlier might have been punished as cowardice has more recently often been treated medically, as an adverse reaction to trauma, and Walsh explores a parallel therapeutic shift that reaches beyond war, into the realms of politics, crime, philosophy, religion, and love.

Yet, as Walsh indicates, the therapeutic has not altogether triumphed—contempt for cowardice endures, and he argues that such contempt can be a good thing. Courage attracts much more of our attention, but rigorously understanding cowardice may be more morally useful, for it requires us to think critically about our duties and our fears, and it helps us to act ethically when fear and duty conflict.

Richly illustrated and filled with fascinating stories and insights, Cowardice is the first sustained analysis of a neglected but profound and pervasive feature of human experience.

Chris Walsh is associate director of the College of Arts and Sciences Writing Program at Boston University. 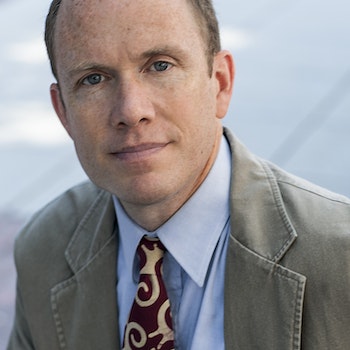 "[W]e want to be told that the standards by which people used to be judged have to be re-examined—as cowardice has been in the last century, mainly on therapeutic grounds—if not abolished altogether. Those who are interested in such standards, whether pro or con, will find this book an indispensable addition to their libraries."—James Bowman, New York Times Book Review

"For all the insult's might, and how frequently it is leveled in a number of circumstances, there is hardly a consensus about what constitutes a coward. Walsh offers a cultural biography of the term, researching attitudes toward it throughout American history, as well as accounting for the damage the label has wrought."—Joumana Khatib, New York Times Book Review

"[A] philosophical meditation on behavior usually considered too contemptible for serious consideration . . . Cowardice: A Brief History is most valuable . . . for the way it refuses to settle any . . . issues. Like a geologist turning over a fragment of igneous rock, Mr. Walsh considers his subject from every angle, and then considers it again. . . . Clearly, cowardice is an indispensable concept for living a life that we may bravely face."—Randall Fuller, Wall Street Journal

"Walsh's well-written and wide-ranging study of cowardice offers some valuable insights into one of the military's—and society's—last taboos."—Australian

"In Cowardice, Chris Walsh, associate director of the College of Arts and Sciences Writing Program at Boston University, provides a fresh and fascinating examination of the use of the term on—and off—the primal theater of cowardice, the battlefield. Drawing on research in evolutionary biology as well as an informed interpretation of American history and literature, Walsh analyzes the relationship between courage and cowardice, the tendency to characterize men and not women as cowards, and the distinction between physical and moral cowardice. Most important, Walsh argues, provocatively and persuasively, that over the past century the idea of cowardice has faded in significance, especially in military settings, and reappeared with somewhat different connotations."—Glenn Altschuler, Psychology Today

"Given the pervasiveness of this feeling in our culture, it's somewhat astonishing that Walsh's book appears to be the only full-length study of cowardice in existence. Fortunately, he's packed a tremendous amount into 190 pages. The book offers a brisk survey of how the word has infiltrated our cultural notions of valor, and draws on authors ranging from Aristophanes to Dante to Stephen Crane, and philosophers from Confucius to Kierkegaard."—Steve Almond, Salon

"[A] lively commentary on the concept of cowardice. . . . Chris Walsh deftly unpicks the competing moral codes underpinning notions of cowardice and its opposite, courage."—Joanna Bourke, Literary Review

"The discourse of cowardice may not bring easy answers to dilemmas so vexing as this one, but if it brought a little more honesty, that would be no small contribution. The somewhat paradoxical problem with facing up to cowardice, as Walsh's excellent book shows, is that it usually requires great courage."—Hedgehog Review

"Why has no one written this book before? . . . In this elegant and thoughtful discussion that draws on literature and films as well as military case law, Walsh thoroughly explores how the concept of cowardice has evolved as a result of changes in the way societies understand morality, human nature, and the nature of war. In the end, he argues, societies need a firm concept of cowardice; without it, they cannot grasp what it means to act courageously."—Lawrence D. Freedman, Foreign Affairs

"Walsh deftly turns from one textual representation of cowardice to another. . . . [Cowardice is] a thoughtful and engaging book."—Kyle Williams, Boston Review

"If a coward is forced to fight, is he still a coward? Is cowardice a matter of will, or is it constitutional? Is refusing to fight in the face of coercion cowardly or brave? Or both? Which is more compelling, moral or physical coercion? These are the kinds of nuances Walsh explores in this thoughtful book, in which he claims that 'cowards and cowardice have something to teach us.'"—Sydney Leach, Weekly Standard

"Walsh's perceptive dissection of cowardice is rewarding, thought-provoking, and entertaining. You could say all the bases are covered: Even the light-mustard dust-jacket is symbolic, and appropriate, in its own yellow-spined way."—Michael Moynihan, Irish Examiner

"[A] galvanizing history."—Matt Seidel, The Millions

"Unpacking what different emotions mean—establishing, for instance, why shame is not guilt—is important and fascinating. As an emotion, cowardice has been neglected, making this elegant, rich, high-powered book particularly welcome. . . . Highly recommended."—J.A. Hall, Choice

"Walsh addresses issues that are complex, challenging and have had long-lasting consequences for individual and state behavior. . . . [He] illuminates well the importance of understanding cowardice for international politics, which will certainly facilitate how we think about peace and security in the future."—Constance Duncombe, Global Discourse

"Walsh writes clearly, with a sardonic point of view and a sure grasp of the issues raised by his subject."—Joseph Epstein, Commentary

"Is ‘coward' our most devastating term of abuse? Yes, says Chris Walsh, in this urbane and perceptive study. The term's power is precisely what motivates Walsh to object to simplistic and misguided uses of it. In interrogating cowardice, Walsh is a measured analyst, intelligently surveying diverse philosophical, medical, military, and therapeutic accounts."—Ryan K. Balot, The Review of Politics

"[Cowardice] will be useful to a broad range of researchers and teachers with substantive interest in the social construction of reality and deviance, rhetoric, militarism, emotions, and masculinity. . . . It is accessibly written, appropriate for undergraduates, and would be especially good for interdisciplinary programs such as gender studies and peace and justice studies."—Amanda Konradi, Theory in Action

"Seldom have I read a book more relevant to my own life . . . And to all of us who teach literature and ethics. . . . [A] marvelous interdisciplinary study."—Raymond A. Schroth, National Catholic Reporter

"This work deserves a large audience, so that we can better understand the conflicts of the past and insightfully prepare for the ones of the future."—Jonathan Newell, Blue and Gray

"Although people today speak little about it, cowardice was regarded as the worst moral defect for long periods by many cultures, the worst of all moral defects, sin of all sins, scandal of all scandals. The historian Chris Walsh tells the amazing story in his recent work, Cowardice."—DJS, Die Burger

"A thoughtful and probing inquiry."—John Gray, The New Statesman

"A bold examination of cowardice. . . . A fascinating look at how our perspectives on cowardice have evolved."—Lisa Kaaki, Arab News

"With impressive insight and sensitivity, Chris Walsh holds up for careful examination one of war's last remaining taboos. That Cowardice simultaneously illuminates and discomfits is a mark of its success."—Andrew J. Bacevich, author of The Limits of Power and Breach of Trust

"We think we know the face of courage, but do we dare look into the face of fear? In Cowardice, Chris Walsh leads us on a journey from Dante's Inferno to Joseph Heller's Catch-22, with wide-ranging stops in between to examine this most taboo of emotions in life and literature. Sifting evidence from many disciplines, as well as accounts of desertions, derelictions, and courts-martial from more than three centuries, Walsh offers a nuanced and humane portrait of the feeling that may remind us most—and most uncomfortably—of our humanity."—Megan Marshall, Pulitzer Prize-winning author of Margaret Fuller: A New American Life

"Thoughtful, penetrating, erudite, and gracefully written, Chris Walsh's analysis of cowardice sheds new light on an ancient and momentous human obsession."—Steven Pinker, author of How the Mind Works and The Better Angels of Our Nature

"There is a tough argument at the heart of this brilliant little book, but what will keep readers turning the pages is Walsh's astonishing resourcefulness as a reader (there is a surprise on almost every page) and the wisdom and lucidity of his style. Unexpected, unnerving in a way, yet wonderful."—Jack Miles, Pulitzer Prize-winning author of God: A Biography

"This is a probing look at the role cowardice plays in life. Ranging widely through literature and history, Cowardice has a freshness that is at once stylistic and substantive. Walsh demonstrates the formidable presence of cowardice and the imagination and effort required to live courageously."—Eugene Goodheart, Brandeis University