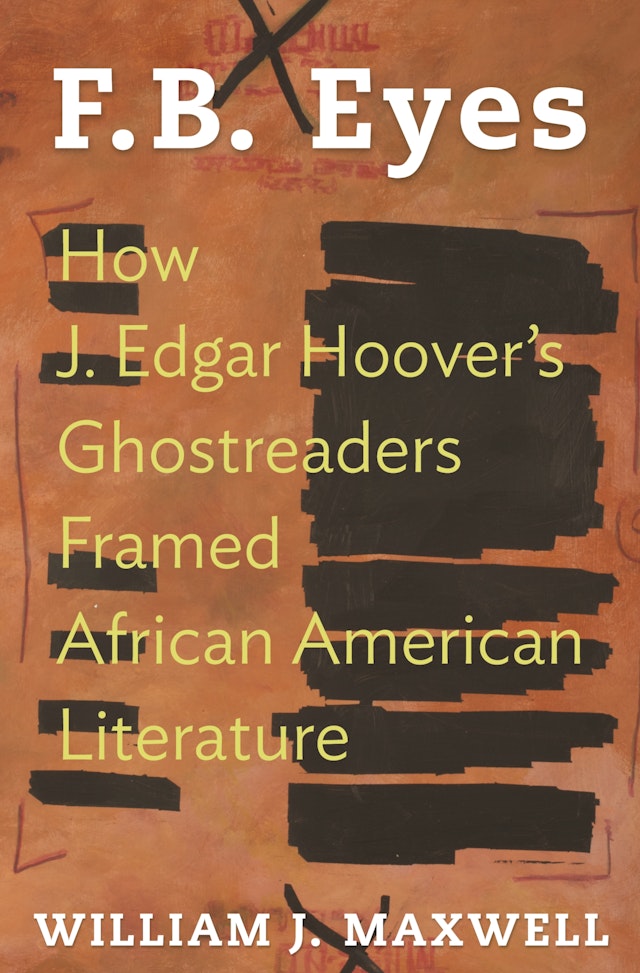 Few institutions seem more opposed than African American literature and J. Edgar Hoover’s white-bread Federal Bureau of Investigation. But behind the scenes the FBI’s hostility to black protest was energized by fear of and respect for black writing. Drawing on nearly 14,000 pages of newly released FBI files, F.B. Eyes exposes the Bureau’s intimate policing of five decades of African American poems, plays, essays, and novels. Starting in 1919, year one of Harlem’s renaissance and Hoover’s career at the Bureau, secretive FBI “ghostreaders” monitored the latest developments in African American letters. By the time of Hoover’s death in 1972, these ghostreaders knew enough to simulate a sinister black literature of their own. The official aim behind the Bureau’s close reading was to anticipate political unrest. Yet, as William J. Maxwell reveals, FBI surveillance came to influence the creation and public reception of African American literature in the heart of the twentieth century.

Taking his title from Richard Wright’s poem “The FB Eye Blues,” Maxwell details how the FBI threatened the international travels of African American writers and prepared to jail dozens of them in times of national emergency. All the same, he shows that the Bureau’s paranoid style could prompt insightful criticism from Hoover’s ghostreaders and creative replies from their literary targets. For authors such as Claude McKay, James Baldwin, and Sonia Sanchez, the suspicion that government spy-critics tracked their every word inspired rewarding stylistic experiments as well as disabling self-censorship.

Illuminating both the serious harms of state surveillance and the ways in which imaginative writing can withstand and exploit it, F.B. Eyes is a groundbreaking account of a long-hidden dimension of African American literature.

William J. Maxwell is professor of English and African and African American studies at Washington University in St. Louis. His F.B. Eyes Digital Archive presents copies of 51 of the FBI files discussed in this book.

"[An] immensely important story about the black authors that we thought we knew, from the 'notorious negro revolutionary' Claude McKay to the Black Arts poet Sonia Sanchez. . . . [A] welcome model for seeing state interference in culture as a two-way street."—Los Angeles Review of Books

"F.B. Eyes is pitched at both academic and general readers. It makes an unexpected addition to studies of twentieth-century African American literature and succeeds in presenting J. Edgar Hoover as a more complex figure than James Baldwin's telling description of him: as 'history's most highly paid (and most utterly useless) voyeur.'"—Douglas Field, Times Literary Supplement

"[A] bold, provocative study. . . . Maxwell's passion for the subject spills onto every page of his detailed, persuasive documentation that 'the FBI [was] an institution tightly knit (not consensually) to African-American literature.'"—Publishers Weekly

"Startling. . . . Paints a sobering picture of state-sanctioned repression and harassment over decades. It's a tribute to the strength of the panoply of FBI-targeted writers, intellectuals and leaders that they, for the most part, toughed it out and remain with us today as a fundamental part of the fabric of American history and letters."—Repps Hudson, St. Louis Post-Dispatch

"The book's fresh perspective on the FBI's fitful tango with both its targets and its own intentions gives twenty-first-century artists potentially more daring variations, in the NSA age, on the arch replies of Wright, Ellison, Hughes, et al., to the spies. But the prospect can never neutralize the queasy, infuriating sense of so much officially sanctioned energy-squandering on generations of writers who wanted little more than to be taken more seriously than their ancestors. . . . The lurid and revealing testimony collected in F.B. Eyes calls to mind the sage counsel offered by John le Carré's fictitious traitor in Tinker, Tailor, Soldier, Spy: Secret services, he explains, are 'the only real measure of a nation's political health, the only real expression of the subconscious.'"—Gene Seymour, Bookforum

"F.B. Eyes is a startling look at how racism has influenced the highest levels of authority."—John T. Slania, Book Page

"Riveting. . . . F.B. Eyes is scintillating scholarship; for those invested in the literary and extra-literary lives of African American authors it holds all the intrigue of a pulp spy novel."—Adam Bradley, Chronicle Review

"[Maxwell] brilliantly and chillingly examines how for 50 years Hoover and the FBI monitored the literary production of African American writers. . . . The volume reads like a detective thriller as it uncovers what Maxwell calls the ‘ghostreading' practices of the FBI."—Choice

"Maxwell's book and . . . website are a treasure trove for readers and researchers alike, especially those with an interest in political history and literary history."—Robin Lindley, History News Network

"Solid and often eye-opening."—John Woodford, Against the Current

"Maxwell does an excellent job in thoroughly exploring FBI investigations of black writers and this unique writer–critic interplay. . . . F.B. Eyes does well in illuminating the interplay between bureau surveillance and literary production."—Jared Leighton, American Studies

"F.B. Eyes exhibits exhaustive research without exhausting its subject. It is the rare combination of the complex argument stated clearly. Maxwell's reader-friendly structure is a welcome contribution to the genre of academic writing. . . . Paves the way for new readings of works we think we already know by providing a new understanding of the complex interplay between twentieth-century African American writers and their readers."—Tamara Slankard, Modern Fiction Studies

"Anyone who spies William J. Maxwell's latest book is sure to have her or his eyes pop. F.B. Eyes is a fascinating study of the FBI's decades-long surveillance program targeting the who's who of the African American cultural scene. What we read as art, Hoover's G-Men coded as threats. In poring over black writers' output across the long arc of the civil rights struggle, the FBI's 'ghostreaders,' as diabolical as they were paranoid, added layers of weight to—and in some cases informed—the African American literary canon, which Maxwell reveals in an irresistible narrative steeped in investigative research."—Henry Louis Gates, Jr., Harvard University

"In this meticulously researched study, William J. Maxwell demonstrates how the luminaries of twentieth-century African American literature preoccupied the 'ghostreaders' of Hoover's FBI, who became some of the most assiduous critics of modern black writing. While making clear the abuses of FBI surveillance, Maxwell also illuminates the fascinating ways in which African American authors incorporated a critical awareness of spying into much of the literature they produced."—Kenneth W. Warren, University of Chicago

"Full of surprises of fact and interpretation, often wittily and memorably formulated, this awe-inspiringly well-researched book offers a completely new approach to FBI spying on black writers and to the readerly and scholarly habits of Hoover's G-Men, who perversely come across as rather pioneering critics of African American literature. This book is an absolute delight to read."—Werner Sollors, Harvard University

"This bold, well-written, and witty book makes a valuable contribution to African American and black diasporan literary history and will be an important resource for some time to come. The book reveals, among other things, a pas de deux between the FBI and black authors that had a significant impact on twentieth-century African American writing. William J. Maxwell shows that the FBI's constant surveillance had an influence on black writers and intellectuals that has largely been ignored until now."—George Hutchinson, Cornell University