A gripping journey through the icy regions of our changing planet 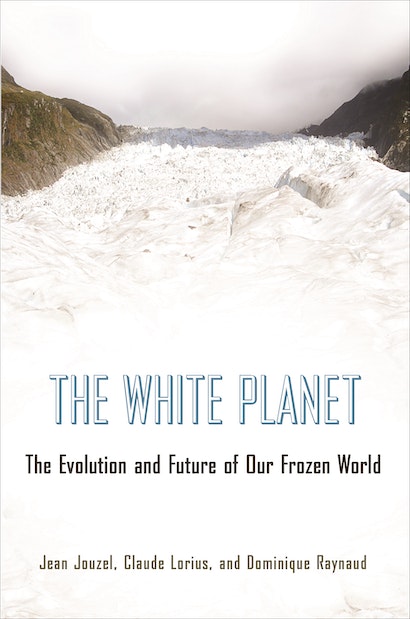 From the Arctic Ocean and ice sheets of Greenland, to the glaciers of the Andes and Himalayas, to the great frozen desert of Antarctica, The White Planet takes readers on a spellbinding scientific journey through the shrinking world of ice and snow to tell the story of the expeditions and discoveries that have transformed our understanding of global climate. Written by three internationally renowned scientists at the center of many breakthroughs in ice core and climate science, this book provides an unparalleled firsthand account of how the “white planet” affects global climate—and how, in turn, global warming is changing the frozen world.

Jean Jouzel, Claude Lorius, and Dominique Raynaud chronicle the daunting scientific, technical, and human hurdles that they and other scientists have had to overcome in order to unravel the mysteries of past and present climate change, as revealed by the cryosphere — the dynamic frozen regions of our planet. Scientifically impeccable, up-to-date, and accessible, The White Planet brings cutting-edge climate research to general readers through a vivid narrative. This is an essential book for anyone who wants to understand the inextricable link between climate and our planet’s icy regions.

Jean Jouzel, Claude Lorius, and Dominique Raynaud are internationally acclaimed scientists who have won many awards for their work documenting long-term climate change through the study of deep ice cores. Jouzel and Raynaud are members of the Intergovernmental Panel on Climate Change, and Lorius was awarded the 2009 Blue Planet Prize.

"[G]iven the public controversy over the nature and extent of climate change, [The White Planet] provides clear insights into the meticulous and exacting research that undergirds the scientific consensus. If you're feeling buffeted by the winds of uninformed opinion and misinformation that fill the media, then read The White Planet for a breath of fresh—if chilling—air."—Laurence A. Marschall, Natural History

"Renowned French researchers Jean Jouzel, Claude Lorius, and Dominique Rayaud review the history of Earth's ice as well as the history of the study of that ice. . . . Offering thorough evidence on a variety of concerns—including shrinking polar regions, the greenhouse effect, and changes in the ozone—the authors outline a clear path to preserve the viability of the cryosophere and our planet."—ForeWord

"By analysing the climates of the past as captured in deep ice cores, ice sheets, and the atmospheric bubbles within them, the authors methodically address the many points of contention over the causes of warming and cooling. Their conclusion is unequivocal: climate change is one of the great challenges to civilisation."—Fiona Capp, Sydney Morning Herald

"The authors relate their studies of the ice sheets and glaciers, and provide explanations of how the science works, discussing the climate history discovered in the ice, and the warming trends that have been observed therein. . . . Highly recommended for all serious collections on glaciology and climate change and for anyone who wants to know more about the science of discovering ancient climates."—Library Journal

"This book is a factual, chronological narrative of Earth's cryosphere, covering the critical role that the ice-covered parts of our planet play in recording climate and how ice records reveal changes in Earth's climate over the last 800,000 years. French authors Jouzel, Lorius, and Raynaud are world leaders in ice-core climate research and have been instrumental in collecting and interpreting these important records."—Choice

"[T]he book does provide a valuable look at the science, history . . . and politics of ice-core drilling and glacial-archive analysis. It will be of immense interest to those already involved in cryospheric science even if it is less successful in its stated mission of bringing a message to the general public."—Liz Kalaugher, Physics World

"Their collective work is a pleasure to read. Well organised, and written in a way that is both precise and personal, it captures clearly what we know about how all the ice on the planet contributes to the functioning of the global climate system, and demonstrates its evolution."—Valerie Masson-Delmotte, Antarctic Science

"The strength of the book consists in enabling the reader to understand the stakes and implications of polar research without the need for scientific proficiency. . . . The white planet makes a very convincing and solidly illustrated case of the crucial importance of polar research to enable our society to navigate through the anthropocene."—Sebastien Duyck, Polar Record

"The White Planet is an appealing tour of the role of ice in the Earth system, the history of ice studies, the great discoveries from ice cores (many of them made by the authors themselves), and some important implications of these breakthroughs for energy use, climate change, and our future. The authors are giants in the field, and they conclude with an often firsthand account of the international response to the science, along with their recommendations for wise ways forward."—Richard B. Alley, author of The Two-Mile Time Machine

"The White Planet is a fascinating account of ice and climate change—and why we should be concerned for the future of life on Earth. The authors are world leaders in the study of the cryosphere, and the science in this book is very strong and thorough."—Jo Jacka, chief editor of the Journal of Glaciology

"In this engaging book, three pioneers of ice-core science weave together the history of Earth's ice and the history of its scientific study, showing how the past of the planet warns us about its future."—Eric Wolff, British Antarctic Survey and University of Southampton

"The White Planet is a fantastic read about an amazing scientific, technological, and human adventure. The book takes us to the center of one of the remotest places on Earth, Vostok Station, Antarctica, where the authors unveiled an astonishing chapter in climate history from layers of ice. Internationally recognized for their achievements in ice core science, the authors are true pioneers, and their words carry a unique wisdom. Everyone interested in climate science should read this book."—Eric Rignot, University of California, Irvine