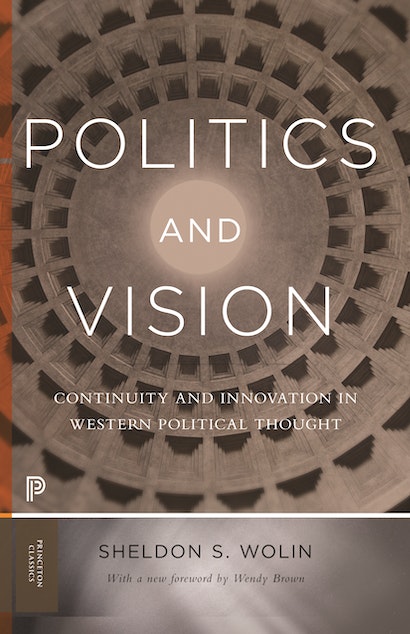 Politics and Vision is a landmark work by one of the great thinkers of the twentieth century. This is a significantly expanded edition of one of the greatest works of modern political theory. Sheldon Wolin’s Politics and Vision inspired and instructed two generations of political theorists after its appearance in 1960. Substantially expanded for republication in 2004, it is both a sweeping survey of Western political thought and a powerful account of contemporary predicaments of power and democracy. In lucid and compelling prose, Sheldon Wolin offers original, subtle, and often surprising interpretations of political theorists from Plato to Rawls. Situating them historically while sounding their depths, he critically engages their diverse accounts of politics, theory, power, justice, citizenship, and institutions. The new chapters, which show how thinkers have grappled with the immense possibilities and dangers of modern power, are themselves a major theoretical statement. They culminate in Wolin’s remarkable argument that the United States has invented a new political form, “inverted totalitarianism,“ in which economic rather than political power is dangerously dominant. In this expanded edition, the book that helped to define political theory in the late twentieth century should energize, enlighten, and provoke generations of scholars to come.


Wolin originally wrote Politics and Vision to challenge the idea that political analysis should consist simply of the neutral observation of objective reality. He argues that political thinkers must also rely on creative vision. Wolin shows that great theorists have been driven to shape politics to some vision of the Good that lies outside the existing political order. As he tells it, the history of theory is thus, in part, the story of changing assumptions about the Good.


Acclaimed as a tour de force when it was first published, and a major scholarly event when the expanded edition appeared, Politics and Vision will instruct, inspire, and provoke for generations to come.

Sheldon S. Wolin (1922–2015) was professor emeritus of politics at Princeton University. He taught political theory for forty years and was the founding editor of the journal Democracy. Wendy Brown is Class of 1936 First Chair of Political Science at the University of California, Berkeley.

"[T]he original edition . . . provided the most impressive synoptic interpretation of politics by any recent Western thinker. Measured, assured, and resolutely independent, it was also wonderfully lacking in self-importance. . . . [T]hat first book remains just as illuminating and every bit as imposing; but it is now accompanied by a second and very different book. . . . Its message is chilling . . . that politics itself, in its generous Western understanding, is well on the way to being eliminated from the experience of human beings. Each of these books is a remarkable achievement."—John Dunn, Times Higher Education Supplement

"Politics and Vision is one of the twentieth century's most important works of political philosophy. Its magisterial sweep of the ideas and philosophical debates that define western civilization illuminates what allows a civic democracy to flourish and what destroys it. Wolin uses the insights of the great philosophical minds of the past, from Plato to Karl Marx, Max Weber and Hannah Arendt, as a lens by which he examines our own failed democracy, a system he describes as "inverted totalitarianism." In the pantheon of contemporary political philosophers Sheldon Wolin stands alone, not only for his brilliance but for his courage."—Chris Hedges, Pulitzer Prize–winner and author of War Is a Force That Gives Us Meaning

"Sheldon Wolin is our premier contemporary theorist of engaged democracy. This expanded edition of Politics and Vision offers an extraordinarily comprehensive and acute account of the encounter between philosophy and political power, from classical Greece to the postmodern era of Superpower. The new edition demonstrates the power of Wolin's original enterprise by bringing it into constructive relationship with Marx, Nietzsche, and Dewey, and with political philosophy since Rawls. Essential reading for anyone concerned with the possibilities of politics in the twenty-first century."—Josiah Ober, Princeton University, author of The Athenian Revolution and Political Dissent in Democratic Athens

"In his classic work, Sheldon Wolin brings to light the most fascinating meanings of politics in its highest sense. He writes with the passion of the citizen who worries about power, and the rigor of the thinker committed to intellectual sharpness and historical awareness. In this new edition, Wolin explores in depth the most difficult challenges that our democratic ocieties are facing after their victory over totalitarianisms. Like the first edition, this new one will open fresh avenues to political thinking, and will teach us new and valuable lessons in the difficult art of being free citizens."—Maurizio Viroli, Princeton University, author of Niccolò's Smile: ABiography of Machiavelli

"I am happy to report that the excitement of the great work represented by the first edition still remains, and that this book is, if anything, enhanced by the addition of the chapters on theorists including Marx, Nietzsche, Popper and Dewey, and Rawls. This revised and expanded edition is more somberly reflective than its predecessor, and at the same time more provocative in the overall picture it presents."—Jeremy Waldron, Columbia Law School, author of God, Locke, and Equality

"A great, provocative, intense, brilliant book. Several generations of political theorists were provoked and instructed by the original edition. Here, Sheldon Wolin brings up to date our understanding of politics and shows why earlier understandings are inadequate to contemporary developments."—Tracy B. Strong, University of California, San Diego, author of The Idea of Political Theory