The year's finest mathematics writing from around the world 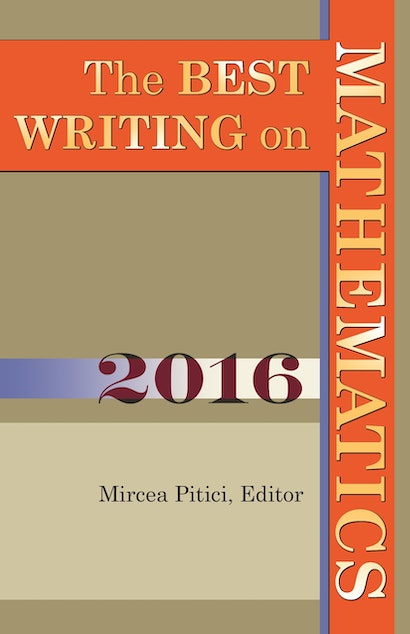 This annual anthology brings together the year’s finest mathematics writing from around the world. Featuring promising new voices alongside some of the foremost names in the field, The Best Writing on Mathematics 2016 makes available to a wide audience many articles not easily found anywhere else—and you don’t need to be a mathematician to enjoy them. These writings offer surprising insights into the nature, meaning, and practice of mathematics today. They delve into the history, philosophy, teaching, and everyday occurrences of math, and take readers behind the scenes of today’s hottest mathematical debates.

Here Burkard Polster shows how to invent your own variants of the Spot It! card game, Steven Strogatz presents young Albert Einstein’s proof of the Pythagorean Theorem, Joseph Dauben and Marjorie Senechal find a treasure trove of math in New York’s Metropolitan Museum of Art, and Andrew Gelman explains why much scientific research based on statistical testing is spurious. In other essays, Brian Greene discusses the evolving assumptions of the physicists who developed the mathematical underpinnings of string theory, Jorge Almeida examines the misperceptions of people who attempt to predict lottery results, and Ian Stewart offers advice to authors who aspire to write successful math books for general readers. And there’s much, much more.

In addition to presenting the year’s most memorable writings on mathematics, this must-have anthology includes a bibliography of other notable writings and an introduction by the editor, Mircea Pitici. This book belongs on the shelf of anyone interested in where math has taken us—and where it is headed.

Mircea Pitici holds a PhD in mathematics education from Cornell University and is working on a master's degree in library and information science at Syracuse University. He has edited The Best Writing on Mathematics since 2010.

"[O]ne of my favorite series of books, an annual compilation of high-quality mathematical writing combined with a valuable list of additional resources prepared by the editor."—Mark Hunacek, MAA Reviews

"Mircea Pitici's yearly Best Writing on Mathematics volume is a great reminder of just how much accessible math there is! . . . Every year I end up saying ‘this year’s edition [of Pitici’s effort] seems like the best one yet.’ And so it does. . . . [The Best Writing on Mathematics 2016] is beautifully-produced. . . . As always, Pitici is impressive with the eclectic diversity of his choices for inclusion. . . . I’m already anxious for [Pitici’s] 2017 edition!"—Math Tango

"Praise for previous editions: "A volume of unexpectedly fascinating mathematical research, musings, and studies that explore subjects from art to medicine. . . . [R]eaders from many disciplines will find much to pique their interest.""—Publishers Weekly

"Praise for previous editions: "A wonderful and varied bouquet of texts. . . . I highly recommend this book to everyone with an interest in mathematics.""—Stephen Buckley, Irish Mathematical Society Bulletin